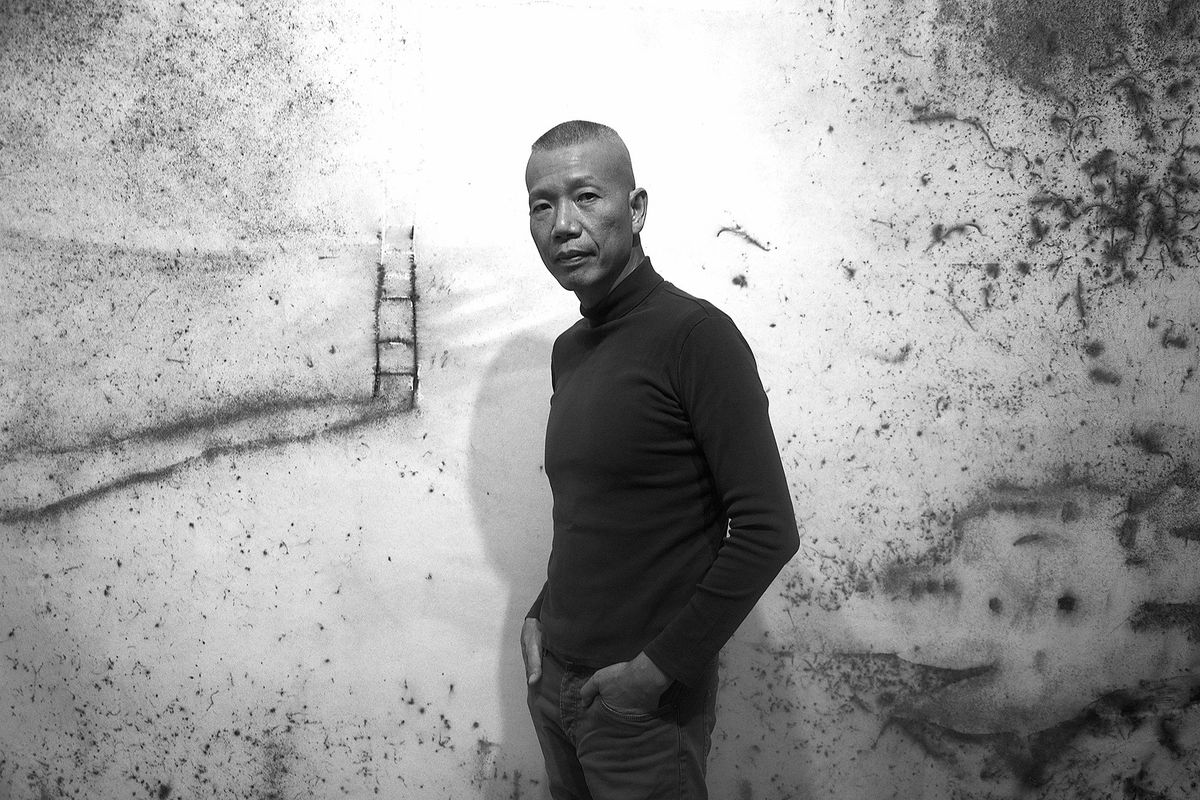 Artist Cai Guo-Qiang Talks The Importance of Artistic Freedom, Donald Trump and How a Documentary Captured the More Authentic Him

Upon meeting Cai Guo-Qiang in his East Village studio, he describes himself as "the subject" that Sky Ladder: The Art of Cai Guo-Qiang, follows. "The film was not initiated by me and in fact is an artwork of the director and producers," remarks Guo-Qiang, whose fearless paintings and firework installations provide an insatiable sense of entertainment for a uniquely wide audience. Art critics, regular spectators and world leaders have all been mesmerized by his work.

"The film is able to present the stories behind these artworks. My life's journey, the challenges I face and what I persist upon through the process. So I think in a way, the film presents a more authentic version of myself as an artist."

I spent the afternoon with Cai, to discuss the long process it took to create Sky Ladder, the five hundred meter long wire ladder sparked with fireworks that features in the doc, as well as his advice for emerging artists and the Republican Presidential candidate, Donald Trump.

What made you feel that this project was more dangerous than past firework projects?

This piece extends from the earth into the sky, is five hundred meters long and weighs around five tons. When a work extends vertically, it is quite different from when it extends horizontally. It concerns not only air traffic but also various weather conditions, like wind and rain. The challenges it faced were quite different. Some people ask me, "Why five hundred meters? Why not just one hundred or two hundred?" which would be easier to realize. In fact, when I attempted to realize this piece in the past, the organizer always suggested making it shorter. I insisted because when I was a little boy I imagined five hundred meters was the distance that would enable one to touch the clouds.

Creating Sky Ladder, it was inevitable that the Chinese government would discover it – especially with the creation of the film. What was their response to the project?

Yes, but the project was realized, and no unexpected accident happened. When the government eventually found out about it, it was okay because for them, the biggest concern was preventing any accidents from happening. So when it was successfully realized, the government officials were freed from any responsibility. The reason why I didn't apply for a permit in the beginning is that I knew that government officials would have to assume responsibility. They would have had to manage the project and then probably wouldn't have given me the permit in time. Moreover, I was purely trying to present this work to my grandma, to my family and to those on the island who helped me. As an artist, I wanted to assume responsibility.

How is your family?

My grandma, as you saw in the film, passed away about forty days after the realization of Sky Ladder. Four months later, my father passed away. It was a relief – and I am grateful – to feel that I was able to do what I could during that time, as a son and as a grandson. I was able to honor them.

What inspired you when you began as an artist?

Ever since I was very little, I always believed that I was an artist. I don't know exactly why I became a professional artist, but I know that from a young age, I liked beautiful things and I didn't like going to work. During the time I grew up in China, no one went to the florists to buy flowers – it wasn't a thing. But I would go out into the fields and pick flowers and would plant flowers in my yard. And in addition, I was influenced by my family. My father was an artist and calligrapher himself. I always had the dream of becoming an artist. This dream, more precisely, is to be a painter.

So what inspires you today?

Things and ideas that are fun to me are always inspiring,. I am in fact not good at doing anything else. Without disclosing too much of the content of this (new) artwork—I was just in London doing a site visit at the London Tower Bridge and after I presented my idea to the organizers they said three things. The first was, "Woah, this is such a genius idea." (laughs) Second was, "This is going to be the crown of this overall project." And the third one was, " This is going to remain in history and be remembered." (laughs) And in fact for me it was just an interesting idea that moved me. Only by being emotionally engaged and motivated by my idea can I then move other people. And of course, I try to be modest and tell them "Oh this is just a silly idea that I spent ten minutes working on." On the other hand I knew as soon as they are motivated and committed to the idea and have boarded this ship with me, that they have now accepted the hard time ahead that will present itself later in trying to realize the budget and tackle all the technical difficulties. For me, what is important is to present them with a dream that moves people in a primal way for them to go on a journey with me.

What is your advice for artists starting today?

Are there any emerging artists on your radar?

And in fact, I just curated an exhibition titled What About The Art? Contemporary Art from China this year at Qatar Museums. For this exhibition I invited fifteen artists to present their unique artistic language in front of the global audience. So yes, I am always paying attention to emerging artists.

Do you identify as a Chinese artist?

Why is it important for you to have your studio here in the East Village, in New York?

First of all I have to say I love New York, as a city. My wife and two daughters all live here. And second of all, and this is very important to me, New York allows everybody to live life normally like everybody else. That to me is very important. There are so many Nobel Prize winners who live in New York and at most, they get stopped on the street by someone saying congratulations. They can quickly move on and live a normal life and soon enough, they'll be forgotten.

There is a point in the film where your project for Shanghai's APEC Conference is compromised due to policies enforced upon you by the Chinese government. What do you make of the political climate in China versus the United States?

In the U.S. there's definitely a broader space that is allowed for artists. However, it's not one hundred percent. Subjects such as racial and gender politics or animal rights, for example, are sensitive. It's not because it is prohibited to discuss but because a shared value system makes certain things problematic. In China, the government is very clear on what subjects are more sensitive than others.

This is not only in the States or China. In France, I also encountered similar restrictions when I realized the explosion event One Night Stand in 2013. My concept was to invite fifty couples to each have their private tent on a barge. They were given exclusive time to make love. There was a button that they could press whenever they reached a climax at which time fireworks would be specifically launched in their celebration. Even though France is such a romantic country and they are so sexually liberated, at the press conference I was forbidden to announce my original concept. I was reminded that it was illegal to encourage public sex. So I had to rephrase: "When they have a really good time, they can press a button…" This is just a brief example to show that there are many dimensions of reality that art confronts. If every artist is always allowed to do everything, it'll be like being in heaven. However, in that case, there's probably no art created in heaven.

With the upcoming election, Donald Trump has represented an establishment that could be more censorial, more repressive. What does the idea of moving forward with Donald Trump as the President of the United States mean to you?

Without getting into whether Trump is good or bad, just the fact that people like Trump are able to say whatever they want to say, and Trump supporters are also allowed the freedom to voice their opinion, at the very least indicates that the political system in America offers freedom. Even when the rest of the world is laughing at the fiasco that's happening on the American political stage, I think ultimately, deep down, everyone agrees that at least this system currently allows such freedom.

Will you ever create Sky Ladder again?

That's it. I've never repeated anything. Though I am not going to realize a fireworks ladder anymore, I am always trying to build ladders. When I explore the language of my painting, for example, I am essentially building a ladder back to the young self who's always wanted to be a painter and dialogue with master painters and art history.