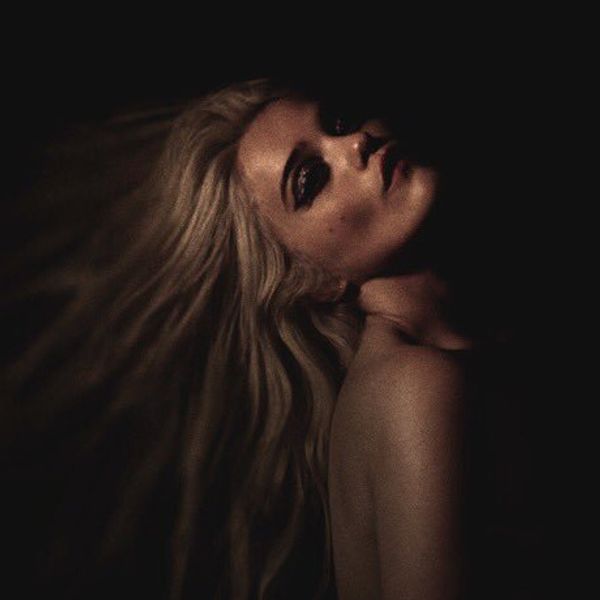 After six long years of obsessive fans haunting Sky Ferreira's Instagram with breathless comments demanding new music (i.e. "where's the album sis" and "is it finally coming in 2049"), she has finally blessed us with the first taste of Masochism.

Her sophomore album's first single "Downhill Lullaby" is the product of years of anxiety, standing her ground, and perfectionism. Each passing year without new music only fueled Ferreira's desire to get everything just right. She led the music's production, alongside collaborators, Twin Peaks music supervisor Dean Hurley and Jorge Elbrecht, painstakingly. She enlisted world-class violinists (like Danish violinist Nils Gröndahl) to recreate the sounds in her head, which were apparently inspired by her fear of drowning in lakes.

"I'm not looking for 'a moment,'" she told Pitchfork in a digital cover story. "I'm looking for a career — and real careers, you build them."

So, with that, "Downhill Lullaby" is a pop-world zag when many pop stars would opt to zig, with its cinematic rock meets chamber-pop sensibilities. It's reminiscent of the surrealist, claustrophobic visions of David Lynch, who remains one of Ferreira's greatest inspirations.

In the song's opening seconds, we're met with a sweeping, swelling string orchestra that is like a warp of Disney's Fantasia, and Ferreira, as conductor, is a demented Mickey Mouse. "You leave me open, when you hit me," she sings about a minute in. OK! The song's evocative lyrics "I can see that you want me going downhill, too," address the seduction of a comedown while "blood and desire/ walked with the fire" and "come and teach me a lesson" promote themes of masochistic self-destruction. The smoldering instrumentation builds into a grungy, darkly rhythmic rock dirge, encompassing Ferreira's pain and pleasure — her terror and euphoria.

And on a personal note (not that I have any experience with this), but hearing the sum of "Downhill Lullaby's" parts is sort of like coming down from a ketamine high, in '70s New York City, during the CBGB punk era, in a harsh midwinter, and trawling the streets in ripped fishnets, a ratty fur, and smeared maroon lipstick. The fact that this track provokes such strong (and moody) imagery in my mind only affirms Ferreira's singular power as an artist.

In her past, specifically the promotional cycle surrounding her brilliant 2013 post-punk meets New Wave-indebted debut, Night Time, My Time, Ferreira has unfairly had to account for the bad behavior of men in her life, from handlers to boyfriends. It is something we often demand of young women forging their own uncompromising artistic paths, but something Ferreira actively fights against. She speaks out openly about what it takes to get her music made from vision to reality. For instance, she funded Night Time, My Time with her own money from high-profile modeling gigs. And in "Downhill Lullaby," you can hear the effort that goes into what we're now hearing today.

A major difference between Ferreira and most pop stars though, is that her spirit is so restlessly creative and her authenticity so hard-earned, that she hardly sounds like she's trying on the final product. In Ferreira's case, this is a Really Good Thing. In fact, it's her magic.