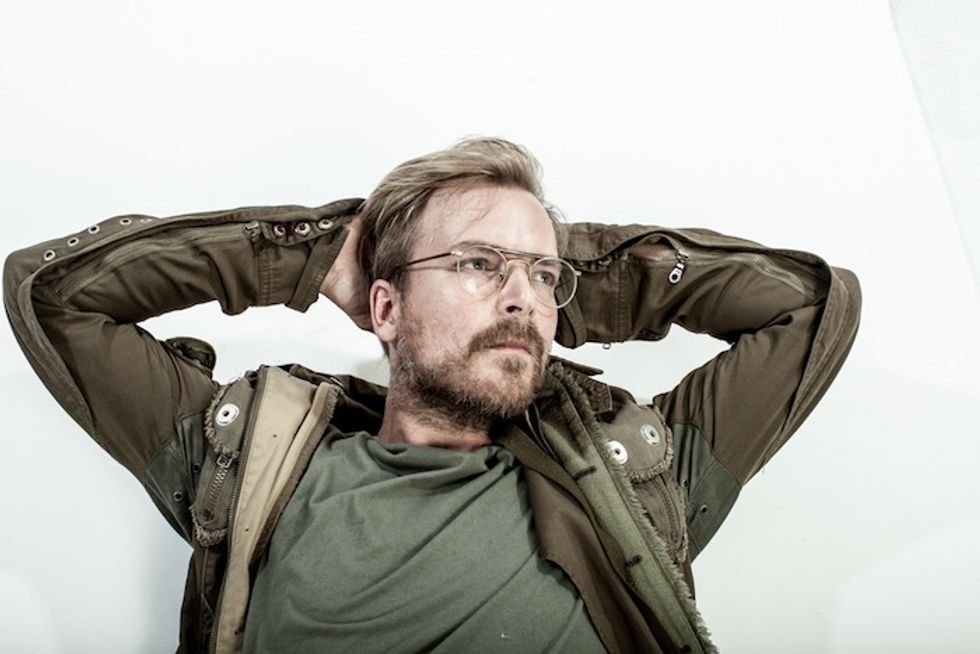 by Paper
PAPERMAG
[Photo by Kelley Ash]
Chad Muska lives the sort of self-forged life a lot of young people would dream about: he's a street skating legend, an artist, a designer, a musician and one of the forces and ambassadors behind Supra and their #AlwaysOnTheRun campaign. It's all the more impressive when you hear Muska's back story of going from homeless kid to skating phenom to tireless hustler who still balances all of his creative pursuits with the same energy and enthusiasm he devoted to skating back in the day. We caught up with the man of many talents to hear about what inspires him, what he considers to be the biggest changes to skateboarding in the last few decades and why he thinks you need to put the same kind of passion into your day job as your art.

From your skate career to the work you do with Supra to music to art to your store -- how do you balance it all?

For me, it's finding a way to figure out how each of these things feed off of one another and lead into the next thing. Whether it's riding on your skateboard and thinking of something in that moment for a t-shirt design or producing a song that can inspire you to create art -- in some ways all these things are very different but in a lot of ways they're exactly the same. But in general, I usually try to focus hard on one thing at a time so you can give your full energy and efforts to that one idea.

It's weird -- I've never been the type of person that looks to something else or somebody else or past movements for my current inspiration. It's usually based off of a cumulative experience from my life. But I guess within skateboarding and being a street skateboarder, I've been on the streets my entire life looking around obstacles to skateboard on so I think my environment is always influencing my creations. If I'm in NYC and skating around the streets, then it's the cement and the steel and asphalt, the people and the fashion and the fast-paced movements that are influencing the way my brain is operating at that point in time...Architecture is another thing I never really realized how much influence it has on me as a person. You can take lines [from buildings] and apply them to a shoe design or a sculpture.

What have been the biggest changes, if any, to skate culture since the time you started out to today?

Well I remember when I first started it was looked at as a white, punk rocker, California-based kind of thing. But when skate parks started to die out and street skating came into play in the early '90s, that when we started seeing change. Hip-hop culture came into skateboarding and became more accepted and also skateboarding became more socially accepted. When I was in high school, if you were a skater, you were kind of a weirdo or outcast but I think when people started to see you could actually make a living off it -- and that's what makes something socially acceptable is money -- it became cool to skateboard.

Can you talk a little more about how skating started to become embraced by many more different types of people?

Yeah, the lines are blurred nowadays between everything. You see someone on the street and it's like, 'Is this kid a hip-hop kid, is he a rocker, is he a scientist?' And also as skaters, now you can be anything -- you can be rich, you can be poor, you can be black, white, Asian -- whatever you are. Just as long as you skateboard, you can be accepted. For me, skateboarding opened me up to so many diverse cultures and personalities.

What projects are you working on currently?

One of my main focuses right now is designing this shoe for Supra that'll be our fifth skytop to come out and it's my signature model that I designed. And on top of that, before this project with Supra took over more of my time, I was focused on art like painting and sculpture. At the moment, I'm working on conceptual work -- very minimal and texture-based, really allowing the mediums to send the message of what it is. I'm working with cement and steel and some wood. I have strong connections to materials because of skateboarding and the urban environment I grew up rolling around on, painting graffiti on the walls also. I've always felt that graffiti and street art is something that, to some extent, should remain on the street. That's forced me to find new ways to express something that's connected to street art and graffiti and skateboarding and an urban environment without it being too suggestive of, like, "here's my throw-up piece that has bubble letters." And as for the objects and sculptures I'm creating, I'm trying to create skateable sculptures. They're meant to be viewed as is but also appreciated as something that you could participate in, too.

Do you have any advice for someone looking to get into the creative world and to balance as many pursuits as you do?

I don't think there's one formula so I'd be hesitant to give advice but the one thing I've always learned is that obviously you have to love what you do. And also that even if you have a passion -- whether it's design, art, skateboarding or music or anything -- that love doesn't always translate to money and it might never translate to money. You have to have another source of guaranteed income, you know? And sometimes you have to be passionate about things that you might not innately feel passionate about -- like if you're a janitor and you hate it, you better do it with pride because that work will fund the things you are passionate about.
Upload a photo or video showing off your creative fixation to Instagram, Twitter or Facebook with the tags with #AlwaysOnTheRun and @SupraFootwear for the chance to receive a pair of the new Noiz runner. For more info on the contest, visit SupraFootwear.com.
You May Also Like
Fashion