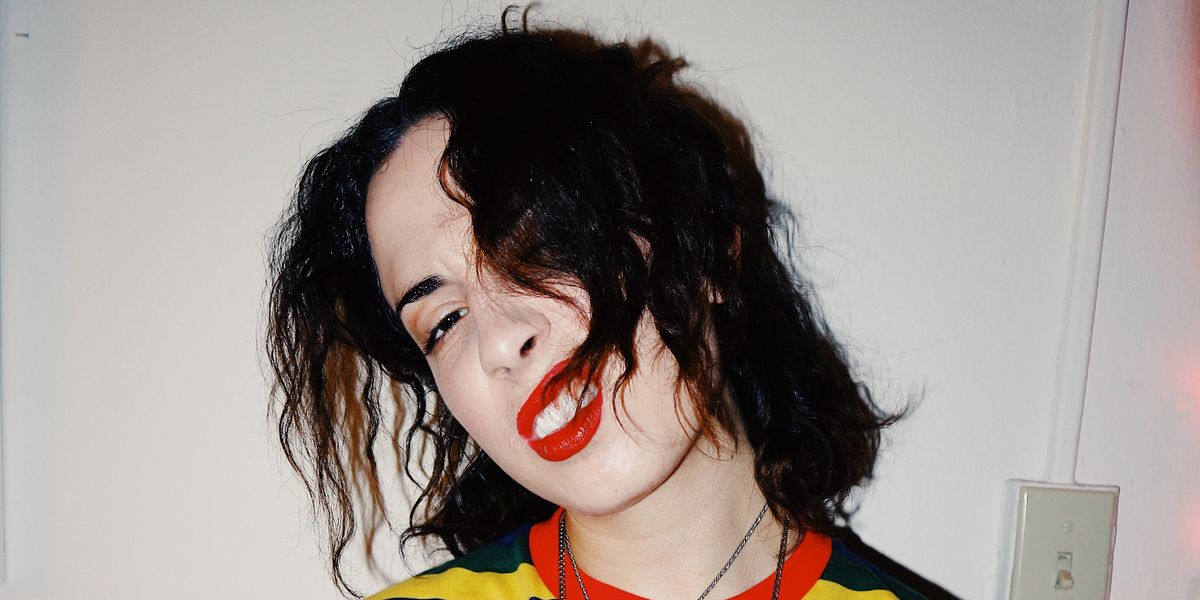 In 2015, Sizzy Rocket made the scary, but vital jump as a queer artist, when she finally declared her sexuality on "Bestie" — a vibrating pop anthem that says "fuck" 18 times in the chorus: "I wanna fuck, fuck, fuck my best friend." At first, she felt alienated for revealing her truth ("I was told I didn't 'look gay,' and no one believed me"), but eventually the track garnered her an audience of likeminded queer women who also felt like outsiders ("Girls with bleached hair and glitter on their faces").

Now, the LA-based musician has released an entire 11-track album about her love for "Grrrls," but more specifically her love for Lauren Sanderson, whom she became enamored with while on tour together. "It's my big, beautiful, gay love story," Rocket says of songs about "falling hard, finding myself, losing myself," and more. She even has a track featuring Sanderson, called "Tulsa," about one night in Oklahoma "that would change us forever."

An accomplished pop songwriter, Rocket's lyrical expertise is clear throughout Grrrl, which follows 2016's debut Thrills and 2017's sophomore effort Hot Summer. Now on her third album, Rocket's point of view is delivered clearer than ever. She dances in youthful euphoria on booming bop "Never Grow Up," opens herself up to being "fucked over" for love on album highlight "King Cobra," and wraps things up with "Tequila in My Blood" — a beautiful, bratty song that announces, "I'm that bitch."

Below, Sizzy Rocket writes about her experience navigating music as a fierce queer woman, and ultimately reclaiming all the "messy" parts of love on Grrrl. "I put all of myself into these songs, this time without holding back," she says.

"I remember the time right before I dropped my first single so vividly. I remember it because I was terrified — I was 23, I had just signed to a brand new label, and it was my first official introduction to the world as Sizzy Rocket. My moment. I chose to take that moment with a song about fucking my best friend. My best girl friend. The chorus says 'fuck' in it 18 times. The music video is, well, not safe for work. And let's just say, everyone in my life was completely against it.

I had my first girlfriend when I was 15 years old, and since then I've always felt like I was hiding something. I would meet up with her after school in secret and we'd lay around and daydream together about the future, drive around Las Vegas blasting Yellowcard, pull over to make out — you know dumb, young, gay, and in love stuff. My first girlfriend experience was genuine, but I wasn't sure if I was normal for having it and it made me uncomfortable in my own skin. I had always wanted to be a pop star, but I never felt like I could have both: my success and my sexuality. There weren't any lesbians in pop culture to look up to (at least, not ones who claimed it publicly) and I had nothing to compare my experiences with — no modern lesbian example in pop culture. When Britney and Madonna kissed at the VMAs, synergic with my coming of age, it was actually considered a provocative power move by two sex symbols; a performance to attract attention from the male gaze — hot, but that was the best I could hope for.

So I stayed in the closet, dating girls throughout college, averting questions from my peers and keeping heteronormative pronouns in all of my songs. It felt like what I was supposed to do.

When 'Bestie' finally came out, uncensored music video and all, I was disappointed by the headlines. Press outlets called it a 'bi-curious anthem,' and my label and family urged me to say I was sexually fluid. I still felt like I wasn't allowed to be my true self, especially as a hyper-feminine artist. I was told I didn't 'look gay,' and no one believed me. Until I met the cult. The week of my album release, I woke up and logged into Twitter to unexpected mania — a swarm of new fans, all teenage girls, crying and screaming and going absolutely insane over 'Bestie.' Their discovery of my music was pure magic. To this day I still have no idea how they all found me at once. But they didn't question me, and they didn't care how queer I was because they liked girls and felt misunderstood too. That week, my release show at Mercury Lounge in New York had a line around the block, all girls with bleached hair and glitter on their faces. They sang my songs back at me and I knew that I was onto something.

Last summer, it all clicked when I fell in real, adult love for the first time. I met her on Twitter — kinda. She was going on tour and tweeted about needing a support act, so when I saw my fans tagging me in the tweet I reached out, half-certain that I would get the tour, half just wanting her to message me back. There was just something about her. When her management emailed me the next day and told me it was a go, I was breathless with momentum but firm about keeping it professional. When we decided to meet in person that night to discuss tour arrangements, our connection was immediate and completely out of control. I remember the first time I saw her, pulling onto my street and flooding the whole thing with headlights. I stabbed my cigarette into the grass and slid into the passenger seat, one platform at a time, teetering on that familiar edge between confidence and insecurity, sensing a newness in the air that was bright, dangerous and reminiscent of my early euphoric days in New York when everything around me was electric and unfamiliar. It's impossible to recognize it as it's happening, but that's what falling in love feels like: slow motion and lightning fast at the same time, each minute like dripping honey.

"This record is a middle finger to the people who urged me to quiet down, a love letter to love and to the Cult for reminding me who I am."

As I watched her perform every night on the road, sipping cheap white wine in the back of the venues, I realized why I was falling so hard: she was so unapologetically herself. She was flamboyant and crass and absolutely free, and as she preached to her fans about the struggles of being young and gay, of feeling like an outcast for something you can't change, they formed an unexplainable connection. In being explicit about who she really was, she wasn't alienating her audience — she was finding it. And in finding this unique kind of inspiration through her, I finally felt like I was home.

I came back from that tour and started writing the album that is now Grrrl. It's my big, beautiful, gay love story. The shameless details on falling hard, finding myself, losing myself, feeling golden for a summer, my lips burning on hers, one night in Tulsa that would change us forever, thousands of butterflies, sour white wine, 100 hotel elevators, gas station coffees, driving too fast, stupid drama, waking up to blue eyes and feeling free for the first time ever. For me, this record is a middle finger to the people who urged me to quiet down, a love letter to love and to the Cult for reminding me who I am. I put all of myself into these songs, this time without holding back, and without trying to find a way around the messy parts. It's scary and painful, but I'm ready. So, hi. I'm Sizzy Rocket and I like grrrls. This love story is for you."