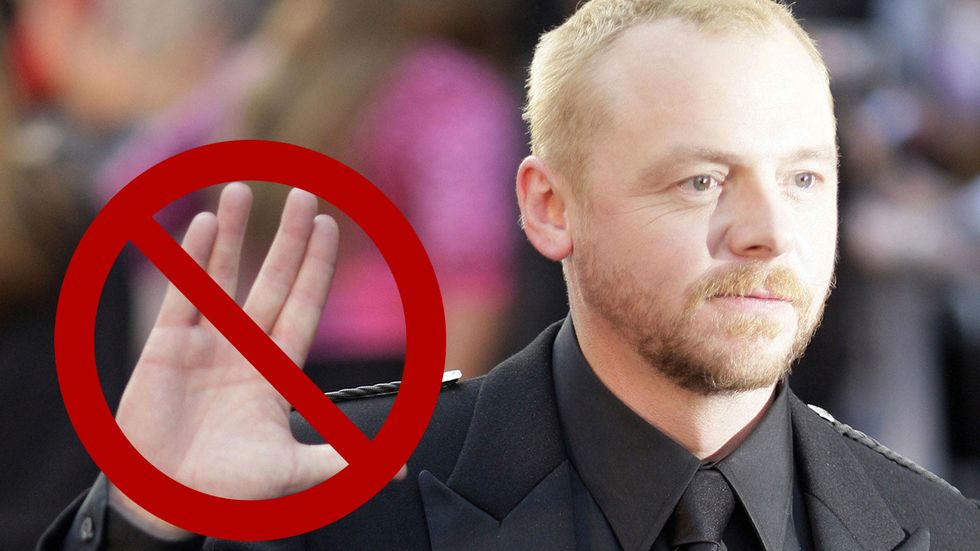 by Eric Thurm
PAPERMAG
Here's the origin story for a debate about nerds--in an interview with Radio Times, Simon Pegg, an actor and writer strongly identified with geek culture through his participation in the Star Trek franchise (he's taking over the script for the next film), role in Doctor Who (as a villain in an early episode), and work in several homage-filled cult favorites (Shaun of the Dead, Hot Fuzz, World's End, and beloved show Spaced), bemoans the state of geek culture:

"I'm very much a self-confessed fan of science-fiction and genre cinema. But part of me looks at society as it is now and thinks we've been infantilised by our own taste. We're essentially all consuming very childish things - comic books, superheroes... Adults are watching this stuff, and taking it seriously!

"It is a kind of dumbing down because it's taking our focus away from real-world issues. Films used to be about challenging, emotional journeys. Now we're really not thinking about anything, other than the fact that the Hulk just had a fight with a robot."

Some people got very, very mad about these really not particularly inflammatory comments--in particular, Katherine Trendacosta at i09, who tries to assign ulterior motives to Pegg after rattling off some kneejerk responses defending the totality of science fiction, something Pegg does not attack. She writes that Pegg seems like a man who "wonders if he's thrown his whole life away on them. And that he thinks he's been infantilized by his association with the genre." But Trendacosta finds her reaction to Pegg so obvious that "it took literally seconds for me to come up with them." Talk about a Hulk-robot fight.

In his reply to the flareup (which also effectively cites Baudrillard), Pegg further identifies the problem as one of focus on grandiosity, of shooting for the moon simply by saying "Let's just spend a lot of money to put the moon in the movie." He says, "I guess what I meant was, the more spectacle becomes the driving creative priority, the less thoughtful or challenging the films can become." He's right: Liking something because it has ties to something you love or once loved--whether by sharing a name or wearing the same costume--is bad. It makes your attention easy to buy, and even easier to sell. It precludes, in many cases, the creation of original work that is both more clearly of its moment and capable of forcing new thoughts and codifying new ideas in ways that demand adaptation and intelligence and nimble ideas--the very things for which speculative fiction often serves as a valve, and which are lost when the trappings of the genre overwhelm its substance.

This is not a new reaction (not even to this particular controversy). But it is one of many, many reasons why fandom--at least in the way it exists right now, within an easily manipulable nerd subculture--is bad, flat-out and straight up. In his reply, Pegg writes that, of course he loves lots of genre entertainment--just the smart stuff. Still, he doesn't go far enough to separate the content of the art from the attitudes of the people who like it. "Nobody could accuse Game of Thrones of being childish," he says, and he's right. Game of Thrones isn't childish (gratuitous nude shots for 13-year-old boys aside), but its fans sure are. These are the are the sorts of readily monetizable attitudes that lead people to get mad about an all-women Ghostbusters team, track with zealous sports-like fandom whether a movie with a superhero "won" the box office, or facilitate the revival of half of the TV from the past two decades.

Of course, there are lots of rebooted or updated franchises that have valuable intellectual content--Pegg cites the latest Mad Max film, in particular--which mostly goes to show that broad statements about this kind of thing, or really broad judgments about any kind of art in general, are always misguided. Specificity is the name of the game here, and where we can be guided by general preferences, allowing your taste to be reduced to a series of checkable boxes--"robot," "Hulk," or "fight"--is to allow yourself to become those boxes. That's why "Taste," or developing a sense for what one likes and does not like, is the key concept in Pegg's initial comments, and the one that's missing from Trendacosta's response.

It's not about what you like, it's about how you like it, and why. The mere fact of something being a Star Wars movie or set in the Marvel Universe or whatever is, too often, enough to get people interested in it, rather than simply having them gravitate toward quality of any kind (or especially toward quality of this kind). Developing taste to the point of constant disappointment is sad, and it makes constant engagement with pop culture exhausting and frequently depressing, but it also raises everyone's standards and prevents them from aggressively liking trash. Ceasing to transform "pretty good" into "awesome" makes the moments when something genuinely great comes along all the more powerful.

Again: People make these kinds of complaints all the time, so there's no reason to expect that it will mean more coming from Simon Pegg. But if his status as a fixture of nerd culture (and his work on the new Star Trek) helps move this conversation forward on actually changing the way people interact with art, it'll be the rare necessary reboot.
You May Also Like
Internet Culture