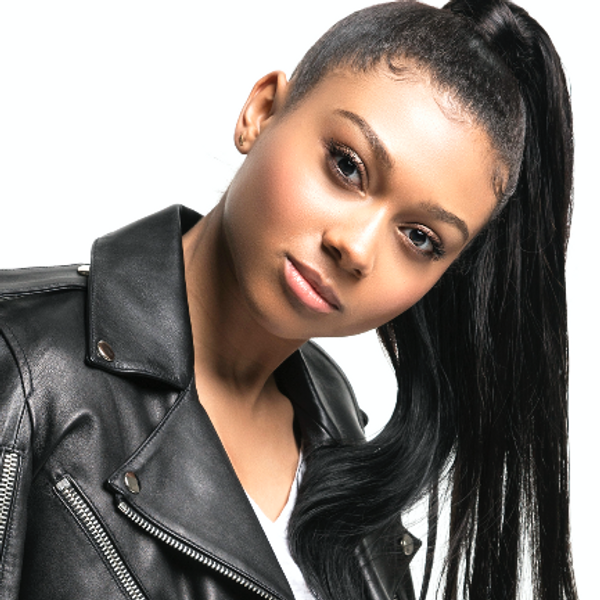 Get Ready for Sierra Capri's Glow Up

Last year, Netflix original series On My Block took the Internet by storm. The show became a trending topic on social media, as Latinx fans and inner-city kids praised it for its relatability and representation. And as Netflix's stats showed, it turned out to be the most-binged show of 2018. The coming-of-age story follows four inner-city teens navigating life in high school, and facing the real dangers of life in South Central Los Angeles. Sierra Capri plays Monsé — the smart, headstrong, independent female of the "Core Four" who is willing to go great lengths to protect her friends.

Born and raised in Baltimore, Maryland Sierra moved to Georgia at the age of twelve, and has always loved performing. She's always dreamt of being an actress, but decided against going at it at an early age as her parents wanted her to prioritize her education. And while On My Block is the actress's her first major project since she was an extra in Oscar-nominated 2016 historical drama Hidden Figures, she showed through her performance that she's got the acting chops of someone who's been in the industry for many years.

PAPER spoke to Sierra about her big acting debut, how she's dealing with the show's success, and what this second time around the block as in store for everyone.

How are you dealing with the success of On My Block?

No one was expecting it. We had hoped for the best, but we were still prepared for anything to happen. However we were just so happy that everyone loved the show as much as we do, and it's really a show for all the ages. We got so much love, and so much feedback from people saying "We've never seen a show like this." I'm so thankful for being a part of it. I couldn't asked for a better project to be on.

What drew you to the project in the first place? What made you want to play Monsé?

Just the fact that I can relate to her in a lot of ways. We have a lot of similarities, especially the way she grew up. She's from South Central LA, I'm from Maryland. Both being inner city kids, there are a lot of things that you experience, and you have to grow up pretty fast. Just our environments, and I also have three brothers, and she has three male best friends so I was able to take my relationship with them and relate it to the way I view my friends in the show.

I was just so shocked of even being picked. After the audition, I just put it at the back of my mind. I still had a test on Monday, so I made sure I didn't get too excited about it. But when they told me I got the part, we were all jumping up and down — me and my whole family. It's so hard to believe even to this day.

Monsé is the really strong female character in her friend group. How do you deal with that?

Well, she's known these guys pretty much her whole life. I think Monsé finds it hard to trust people, and she always has a wall up, because she struggles with self-identity a little bit. But these three guys, she knows in her heart that she can trust. She loves them, and they love her. She will do anything to make sure they're okay, and to keep the "Core Four" together.

The huge significance of the show is showing inner city life. Can you tell me how important that was for you to tell this story?

When you grow up in the city, a lot of the stories don't get told. Being on a platform, we're able to show what really happens, and touch a lot of issues that are so prominent in today's society. It's amazing to have the love and feedback we have from fans. Again, it was a gamble. We didn't really know how the show was going to be received.

We touched on a lot of issues, and it's just real. It's a real show, and real life.

"People should expect a glow up. This season is so much better than the first."

What are the funnest experiences on set?

From season 1, we had so many fun experiences. I think the most fun that we had was in the hair and makeup trailer. We love all of the crew so much. Season 1 and season 2, we loved the crew. They really are family on and off set. We always hang out, and there were so many fun moments that I can't even think of anything specific because everyday it never felt like work.

What are you most excited for people to see in Season 2?

People should expect a glow up. This season is so much better than the first. There are so many new things that come into play, and so many more fun adventures that we go on. It's just so fun. It's great. I can't wait for everyone else to see it.

In what sense does Monsé, and the gang, glow up next season? How do they grow?

In season 1 the characters were being introduced and we got to speculate and see the surface of what everyone had going on. In season 2 we truly get to know who each character is and a lot of questions are answered.

Outside of On My Block, what else are you looking forward to exploring in your career?

I'd love to do an action film! I do my own stunts on the show, so I'd love to do a superhero movie. Definitely a drama. All genres of filmmaking. A movie, I'd say that'd be my goal.