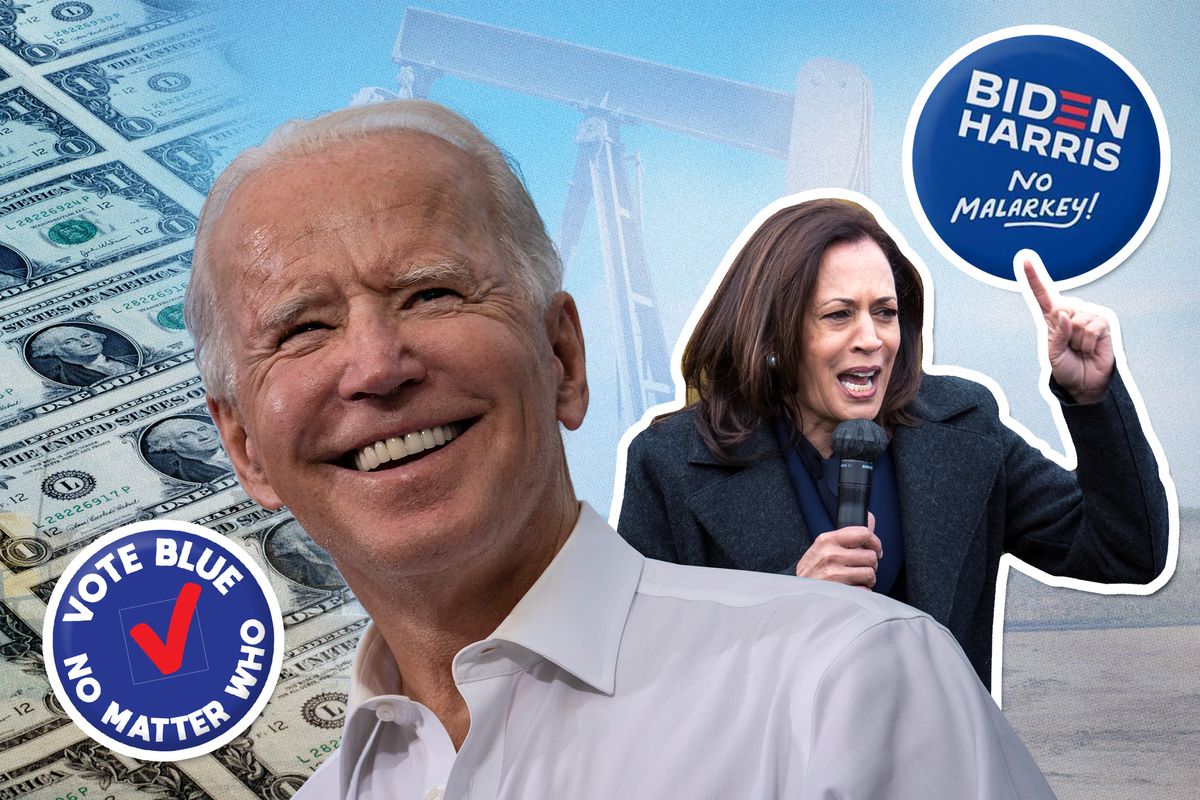 Why We Should 'Settle for Biden'

If you're not excited about the Biden-Harris ticket, you're far from alone. Even with a second Trump term on the horizon, many left-leaning voters are feeling apathetic about supporting a centrist candidate whose policies promise a return to normal as opposed to a leap into the future. Under Biden, universal healthcare still has plenty of asterisks. So does climate policy. Income inequality will likely continue to escalate. It's a given that the police will remain as powerful as ever. Fracking. The list goes on.

Then there's the system itself. It all feels so pointless. An election rarely promises progress, let alone revolution. Voting doesn't feel cool or particularly useful, no matter how many celebrities urge us to make our voices heard. Most of said celebrities live in California, which will reliably go blue, and in reality no one's voices count for much outside of the swing states.

Related | When You Can't Change Their Minds

But there's also a case to be made that voting for Biden is better than nothing — and that, on closer inspection, the Democratic candidate's policies have benefited from the past four years of progressive activism from dirtbag leftists and pussy hat wearers alike. He knows how badly people wanted Bernie, and has adjusted at least some key stances accordingly. He's also categorically less corrupt than Trump.

With an anxious and confusing week ahead, PAPER called up Sam Weinberg, former Sanders supporter and founder of the Settle for Biden social media movement, to hear his pitch for the "no malarkey" candidate.

What's the message of Settle for Biden?

What we're trying to get across to people is that you don't have to be head-over-heels in love with a candidate in order to vote for them. You don't have to think they're perfect. No candidate is perfect, no candidate is going to agree with you 100% of the time, and right now it really comes down to the fact we have two options — one of them is good, although not as good as some people wanted, but the other one would be an absolute nightmare for a huge chunk of the country. As well as the country's norms and principles themselves.

What inspired you to found a pro-Biden movement?

There are lots of people out there who I know personally, who in March or April or May were supporters of Bernie Sanders or Elizabeth Warren, and who were really reluctant to back Biden. And a lot of people have come around now, just because of how bad the circumstances have gotten, how much worse the pandemic has gotten, and all of these ridiculously corrupt and awful things that Trump keeps doing — including his nomination of Amy Coney Barrett to the Supreme Court.

But at the same time, Biden has also become a lot more progressive. He's adopted climate policies that were championed by people like Jay Inslee, Bernie Sanders and Elizabeth Warren, and he's really pivoted towards the progressive wing of the party in a way that we didn't expect, and are really happy to see.

How has it been running the Instagram these past months?

We've gotten a lot of traction with the message that we're trying to spread. In terms of the election specifically right now, I'm personally pretty freaked out. I'm confident that if the election were free and fair, Biden would win in a landslide, but with as much voter suppression as there has already been and is going to be, I'm not too confident. And that's why we're working as hard as we can to push the needle in Biden's favor.

There's a criticism that social media isn't nuanced, but when it comes to our messaging, it's actually as ambiguous as it gets. Saying, "Hey, he wasn't our first choice, but we're going to take this grey area, even when we couldn't get the candidate that we wanted." Because of how bad the alternative is, and how much better the person we were settling for has become.

Can voter apathy really be useful in this instance?

There are lots of people out there who are really excited to vote for Biden, and that's fantastic, that's great for them and it's great for Biden, it's good for the country I guess. But we're trying to talk to people who don't feel that way, and those folks are people who are traditionally not catered to too often in general elections. There were a huge chunk of Bernie supporters in 2016 who voted third party or who didn't vote, and obviously they're responsible for their own votes, but at the same time it's not like the national party was really trying to appeal to them much. There weren't a huge amount of concessions made by what we could call the establishment.

This year's different. We know how bad of a president Donald Trump is, and how bad of a person Donald Trump is. There's ample evidence. Biden has shown a penchant for collaboration and compromise. He has really been proactive in adopting more progressive and economic policies.

What are the Biden policies you're genuinely excited about?

There are a lot. Joe Biden's big ticket item is his Build Back Better plan, which is a two trillion dollar investment in green jobs and infrastructure. It would create millions of jobs, it would pour lots of money into the economy, it would really foster economic growth and sustainable development. Net zero emissions by 2050 is a part of that. We need something a little bit better than that if we're being real, but that's the best thing that's been put on the table that's actually a possibility.

We are really enthusiastic about his plan to end the death penalty, we're enthusiastic about his plan to forgive student debt for families making less than $125,000 a year, really there are a lot of progressive policies that Biden has adopted that personally I didn't expect him to. So it is refreshing and reassuring that he has, and that he seems so committed to them.

What are you most worried about if Trump does win again?

There are lots of things. On top of any specific policy or action that he could take, I think the bigger fear is that he would continue eroding our democratic norms and eating away at the established protocols of a president or any politician. The biggest fear, the worst case scenario, is that we descend into full-on fascism. It's not unheard of for a democratically-elected — or, sort of democratically-elected — leader to take their government that route. And it's scarily possible that the Trump administration could become the Trump regime over the next four years if he's re-elected.

Do you find him different to Republican candidates in the past?

They're bad in different ways. I don't know if Trump is really an aberration. On the surface he definitely is, but at the same time there's a pretty compelling case that his success as a politician is the logical result of years and years of Republicans obstructing progress and polarizing the political climate. So, defeating Donald Trump this election cycle is not going to get rid of all the problems and reasons he was elected in the first place. It's not going to erase the reasons that people supported him to begin with. But it's definitely a necessary first step.

A lot of voter apathy on the left comes from the fact many people don't feel represented by Biden or any mainstream politicians, because of his race, gender, age, whatever. Is it possible to speak to them?

I would definitely hope so. The concerns that people have had about Biden not representing their interests are definitely valid, and deserve to be heard out, I think at this point Joe Biden has shown that he's a fundamentally decent and caring person, and that he will govern for all Americans — not just the ones who voted for him. And regardless of their age, gender, skin color, race, whatever. So, it's true that he's an older white guy, but that's too flippant of a characterization. He is a lot more than that, he's willing to hear, respond and amplify the voices of Americans who see things differently than he does.

If Biden is elected, would you continue to use this account to put pressure on Biden to enact some of the progressive policies you name?

That's the plan. The plan is that if he is elected, we're going to try and hold his feet to the fire, and first make sure that the Biden-Harris administration keeps all of the promises that they made — specifically when it comes to guaranteeing everyone healthcare, to combating climate change, abolishing the death penalty, forgiving student debt. And then, we also would hope to push them further, if possible.

We're pursuing not just a public option, but Medicare For All. We're talking about a full-on Green New Deal in the next few years. There are lots of options for progressive change, that are available and that could be quite possible if Biden wins the presidency and if Democrats keep the House and take the Senate. So that's where we're planning on going if he wins. Right now we are just focused on the election. We're doing everything we can to get out the vote for Biden. And just spread the word on his behalf. But after the election, we're not going anywhere.

And what if he doesn't win?

I don't quite have a plan for that. We're just doing everything we can to try and avoid that outcome. If that unfortunately were to happen, we'd have to re-evaluate. But right now we're hoping for the best.