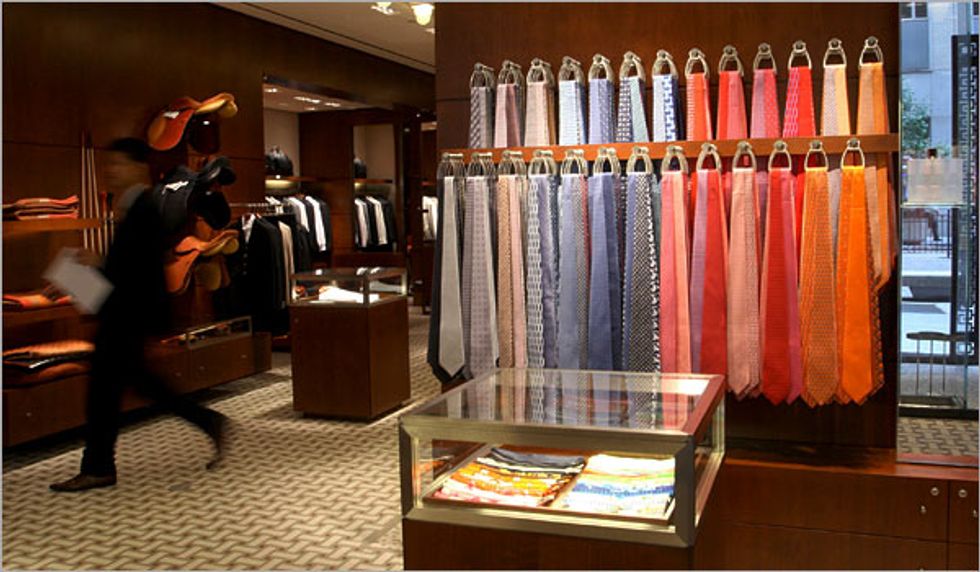 The concept of the HermÃ¨s Wall Street store was tailored in part to fit the location and its culture (it includes a department for quick-made custom suits catering to high-stress, high-maintenance bankers and brokers), but is an otherwise standard (and beautiful) offshoot of its flagship store in Paris. According to Rena Dumas, head of Parisian interior-architecture agency RDAI, the main vision for the store was to create âcommunication within the space, but also privacy.â A square room almost like a courtyard divides the dark cherry woodwork of the menâs side from the brighter frosted-glass walls of the womenâs side. Among the storeâs specialty items are the hard-to-find Birkin handbag with a diamond clasp and lock, a two-of-its-kind crocodile-skin attachÃ© case and two new ties that were designed especially for the Wall Street opening (one features the Statue of Liberty). HermÃ¨s also collaborated with Harley-Davidson for the first time to create a unique motorcycle, which is propped in the Wall Street store as its own window display. In the other window: a metal horse made of rusty springs, screws, bolts and clock parts, with a specially designed saddle made of gray cashmere flannel. Taking inspiration from Paris, Wall Street and even courtyards, the HermÃ¨s store in New Yorkâs Financial District combines specialty items with a radiant energy. 15 Broad St., (212) 785-3030.

Photo by Tina Fineberg for The New York Times

Henrik Vibskov Is Our Shop of the Week

Cire Trudon is Our Shop of the Week