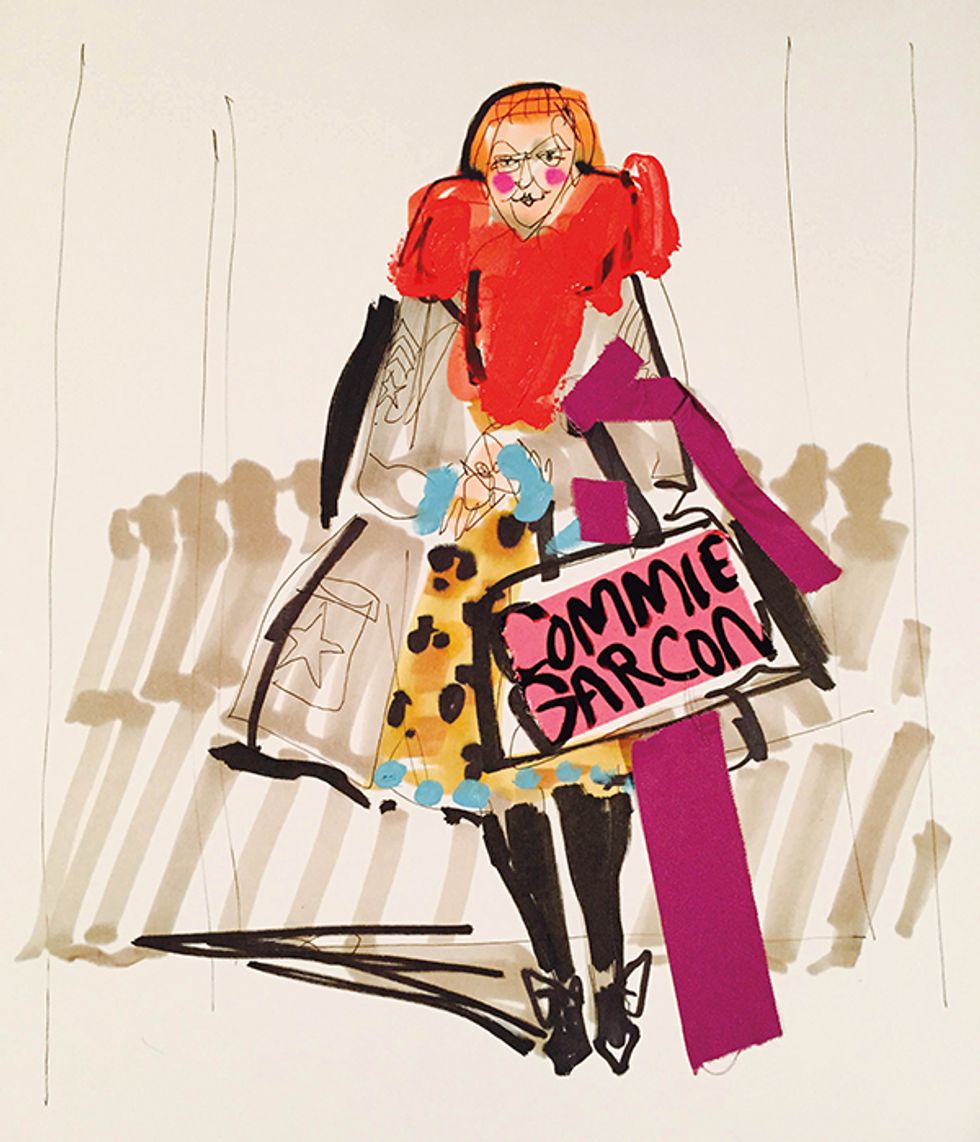 Shop, Comrades: A Manifesto From the Best-Dressed Commie at the Couture Shows

by Lynn Yaeger / Artwork by Donald Robertson
PAPERMAG
For as long as I can remember, I've been gripped by two seemingly contradictory obsessions: the struggle for social justice and, snuggling right next to this noble belief, a fierce desire to possess the most beautiful material things that money -- usually a lot of money! -- can buy. In both arenas I am a woman of extremes: I like my politics tough and my sables soft. I really, truly believe that cruelty-free diamonds are a girl's best friend.

Of course, some people might think that sequestering a copy of Lenin's State and Revolution in a Fendi bag, or pinning a "Health Care is a Human Right" badge on the lapel of a Prada coat, is maybe just a little peculiar. And I admit that, at least on the surface, these twin notions are extremely unlikely bedfellows. (Or, put another way, the mattress would be in an underground resistance bunker, but the sheets would be Frette.) I confess that in my younger years I was a bit troubled by this conundrum, feeling a nagging guilt as I made lists of brooches and bags in the back of my notebooks during graduate school lectures on Marxist political economy.

It wasn't until I made a fateful trip to Paris when I was in my twenties, and went to a militant labor rally there (couldn't understand a word, but I am sure I agreed with everything), that I realized these opposites were far from irreconcilable. The French radical feministes were all dressed in silky Saint Laurent-ish dresses, impeccable heels and glossy scarlet rouge a levres at a time when their American counterparts thought overalls and Frye boots were dressy. If these Frenchies could storm the barricades looking like they just stepped out of the pages of Madame Figaro, why couldn't I?

It's easy to understand the roots of my activism. I came of age in the 1960s, when everyone who was cool, everyone you wanted to hang with, was on the Left. And my parents were both staunch union members, though oddly their idea of a fun Saturday afternoon was trolling the aisles of Saks Fifth Avenue. I think it was part of some idea they had of themselves as cosmopolitan sophisticates. They read The New Yorker and we went to Broadway shows -- neither activity shared, as far as I could tell, by any of our Massapequa neighbors. I guess I ended up taking their two mild ideas to extremes: my clothes are far more expensive and fancier than anything they ever wore, and I rarely miss a demo, even if it means tromping around Zuccotti Park in a pair of beribboned lavender Repetto ballet shoes.

And on reflection, it seems to me that my politics and my shopping fervor are rooted in the same conviction: that people who work for a living should be able to afford nice things! Why shouldn't the ones who work the hardest (if you don't know what I'm talking about, try bussing tables for 10 hours or standing behind a cash register at the 99-cent store until your feet are ready to fall off) have good clothes and decent homes? Why should anyone have to worry for one minute about health insurance? Why should some doofus with a pile of inherited wealth get to shop on the Rue Saint-HonorÃ© while our underpaid brothers and sisters are stuck with Walmart?

But you don't have to take it from me. A hundred or so years ago, the great socialist thinker and activist Emma Goldman, describing her idea of a fabulous new world, allegedly stated, "If I can't dance, I don't want to be part of your revolution." Hey Emma, how about a trip to Bergdorf's before we hit the clubs?
You May Also Like
Music