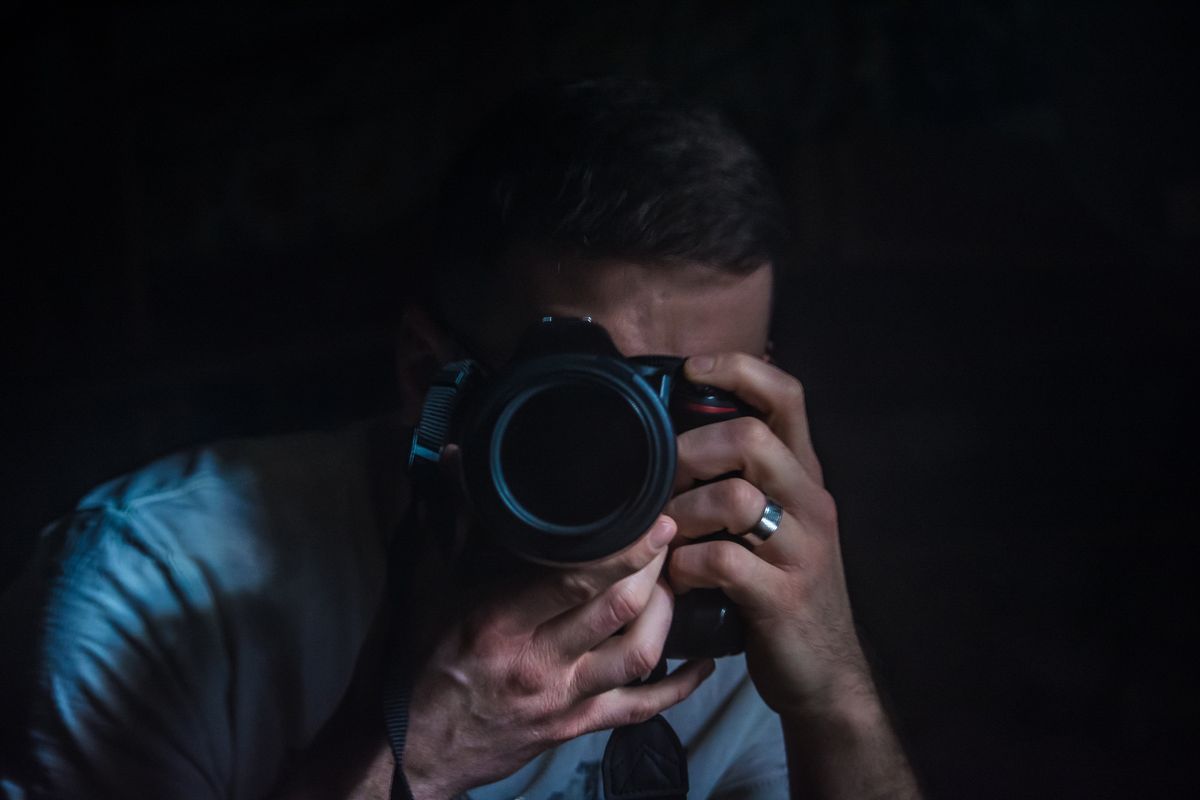 UPDATE 3/6/18: @shitmodelmgmt has now taken down its "Blacklist" of those accused, citing growing pressure and threats to her personal safety and that of her loved ones.

While she specifies that many models reached out to thank her for her efforts, the Instagram account has also been labeled a "defamation machine" by various people named, many of whom are trying to figure out her identity in order to sue for libel.

In a lengthy statement posted to her Instagram story, @shitmodelmgmt explained the list's retraction:

"Blacklist going down at midnight — I'm getting too many death threats and threats to 'find my family' and 'make me sorry I did this,'" she wrote. "I'm still not sorry for protecting models from future negative experiences. Thank you so much to the thousands of people that supported me through this scary but important movement."

She continued: "Someone had to do this. I know it's crazy that a meme account ended up being the person to do it, but it was just time. What would you do if you had thousands of horrific stories? Would you just go to bed at night knowing you had a way to help? ...I'm not the kind of person to stay silent. And maybe I'm too bold. but I couldn't wait around for 'change.' Because it wasn't coming. Not until someone spoke out, no matter how scary it is."

The creator also addressed those who have sent her names of abusers that she had not yet uploaded to the list, saying she would be adding names until the list was unpublished, and asking them to screenshot.

Mario Testino. Bruce Weber. Terry Richardson. Names once championed by fashion's gatekeepers are now black-marked for their alleged longtime abuse of models. Over the past six months the media has diligently pursued stories of sexual assault survivors, but social media is frequently the one getting there first.

First, the "Shitty Media Men" list (a Google spreadsheet for journalists to anonymously share allegations of harassment), though never intended to be public, became an outlet for women to air the publishing industry's dirty laundry, and now a memes-for-models account, @shitmodelmgmt, is offering a similar platform with its "Blacklist." Its nameless founder, who's a former model herself, wants to provide a resource to survivors with a list of names of the accused (photographers, stylists, agents, designers) that she suggests models avoid.

In our post-Weinstein world, the list has exploded. Models are submitting their stories directly to @shitmodelmgmt, who reads and verifies others' claims via screenshots or gut instinct, and adds the names to her list. For those who have three or more accusations from separate people to their name, @shitmodelmgmt will add an asterisk. Some of the men, she says, have 30 or more accusers.

The legality of the list remains for now in a gray area. In the "Blacklist" introduction, the creator writes, "Every name on this list was sent to me by other people, and I am simply reporting what was said to me. This is not my personal opinion, I am reporting the experiences of others. Until proven, these names are simply allegations. This does not discredit any experiences shared with me; as I am reporting what was told to me over direct messages, I'm formally stating that the claims are allegations. Take from that what you will." She says that she's received numerous cease and desist letters, which she has ignored, saying, "I'm not afraid because I know that they are afraid."

The introduction adds, "Remember that YOU are the victim. Not the abuser. Not the predator. Not anyone else. And you have the right to be ANGRY. Coming out with your story is terrifying, but naming your abuser can help keep other potential victims safe."

In an interview with PAPER, the "Blacklist" creator speaks out:

Are your emails blowing up?

I'm getting thousands. It's insane. I feel like Justin Bieber. It's crazy.

Have you considered revealing your identity?

I was considering coming out on it a few times, but I'm so glad that I didn't because I would be scared. My mom is scared that people are going to come find me and stalk me and I'm like, "No, I don't think anyone knows." I mean I told a few people, but it's so much better like this.

Tell me about @shitmodelmgmt's inception.

I've been a model for so long, and [it's] the reason I started the account two years ago. I'm really shy, so people can walk all over me in my jobs, and I kind of let my agents tell me what to do all the time. I was always making jokes about my life on Twitter, [and] I wanted to make a meme account that other models could see. It wasn't even really anonymous, but then it started getting so much traction.

Shit Model Management on Instagram: “lmao 😪 if i wear a shred of makeup i get scolded lol??”

Ever since I started it people were like, "Thank you for being a voice for models." So that's just been my thing, I guess. Slowly it became this place where I low key exposed people. People were so glad to see that, and agreeing with me. I would take really long hiatuses from it because I get anxiety, but I came back a few months ago and I put on my story, "I'm bored, let's gossip." I did not know this would happen. People started saying like, "Here's some gossip: this agent at my old agency tried to literally molest me." I felt responsible knowing, [and wanted to] do something about it. People were DMing me like, "Please put this on your story." That's when things really changed and I started outing people. All the angry photographers are telling me people are lying. But people don't make this up. This is not something to lie about. I've never met someone that lied about sexual assault in my entire life.

Have any of the guys on the list reached out to you directly or responded?

So many. Almost half of them probably. My entire email is full of these pretend lawsuits and I'm just ignoring them. It's funny because most of the ones that are the worst and most repeated names are the ones that are scared. So that's why I'm not afraid because I know that they are afraid.

You're sending the industry a message?

It's crazy because this hierarchy of people think they're safe because they're at the very top, and it's also designers that have all these employees who know, but they all want to work for that designer, so no one wants to say anything. It takes one brave person to stand up and then it starts crumbling down from there.

Have you ever been nervous to add a submission involving a big industry name?

Yeah, there were some people. There was this photographer that shoots for Victoria's Secret and we were actually friends on my account. Someone messaged me off the fake account with no followers or profile picture. So I asked if they had any screenshots or anything, because if it's someone that's being anonymous then I feel like I can't get back to them. She was like, "No, I don't have any proof or anything." The story kept changing, it was weird. And so I just didn't put them on the list at that point because it is serious to get accused of that. Sometimes there isn't a lot of proof, and I know I have to trust my gut. It's so scary because I have shot with so many of these photographers.

Has anyone come forward to defend one of the men on the list?

Yes. I think it's a little bit annoying to be honest, because everyone has a different experience. They're like, "Oh my god, that is my friend. I go hiking with him every weekend. He would never do that." It's like, I'm so happy that he hasn't assaulted you, but clearly he did someone to else. There's no excuse. You can't defend these people, especially when they have stars by their names... that's serious. Instead of trying to defend him and get him off the list, talk to him, find answers and question him. You shouldn't automatically defend someone. Maybe be a little skeptical, you know?

Exactly, it wasn't happening to you. It's funny because when I was exposing Testino and Weber a long time ago, all of these girls were like, "Oh my god, he's the nicest ever. I shot Abercrombie with him." Like, I'm sure he was respectful because you're not who he's after. This industry is full of enablers. Everyone in charge is an enabler. The agents are so bad about it.

It's a power dynamic?

It's literally this feeling of power. And that's why I hate people who are victim shaming because they have no idea how much power these people hold over you. They control your entire career. Everyone I know has some story, big or small, that happened in this industry. We don't have any regulations, so it's just this weird industry that doesn't get regulated by anything. There's no consequences. It's crazy and nobody understands or knows about it because the people in it get away with everything. It's this weird private thing going on in the world.

Do you see it changing?

I want it to change. It's taken forever and it's still so bad. [Many designers] are like, "We love women, we're such feminists," but you literally only cast size zero models and are promoting unhealthy body standards and eating disorders. That is not right. You're not a feminist, you're not an activist, you're actually the worst.

Have you encouraged anyone to go on record with their accusations?

Some are more open. I put one person on my story, and a model responded like, "Please just ask anyone or tell me anyone that has a story about him and tell him to contact me," because he was in a lawsuit with the person and getting blackmailed. That's the crazy part is they're still trying to get away with it. I've actually been referring models to each other with the same stories. If somebody keeps [getting] reported, I'll just type his name in my email and it'll come up dozens of times. Some of these people are literally serial assaulters, like it's awful. So that's why this is so important.