She's Got Balls: 12 Creative Women Get in Touch With Their Masculine Side 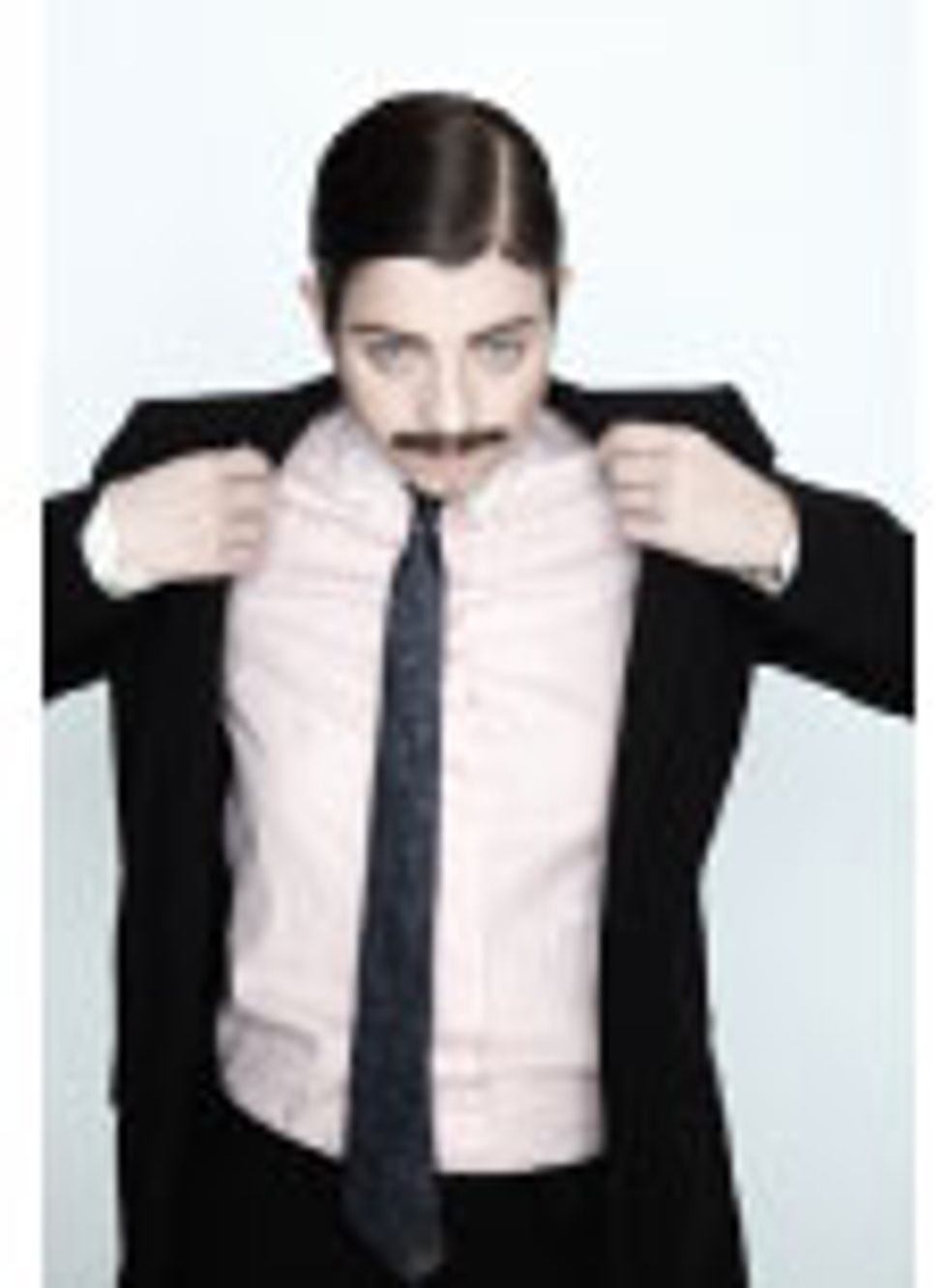 MICHELLE TRACHTENBERG
"I actually feel most comfortable in jeans," explains actress Michelle Trachtenberg. Dressed in a sharp suit, Gossip Girl's resident troublemaker talks about playing a "crazy stoner goth chick" in the upcoming movie Kids in America, and about her impending ventures behind the camera, producing several TV and film projects. Trachtenberg had no problem impersonating a dude for a day. "My sense of humor is very dirty," she says, stroking her facial hair. "Most of my friends are guys, except a handful of girls. I talk and think like a boy." 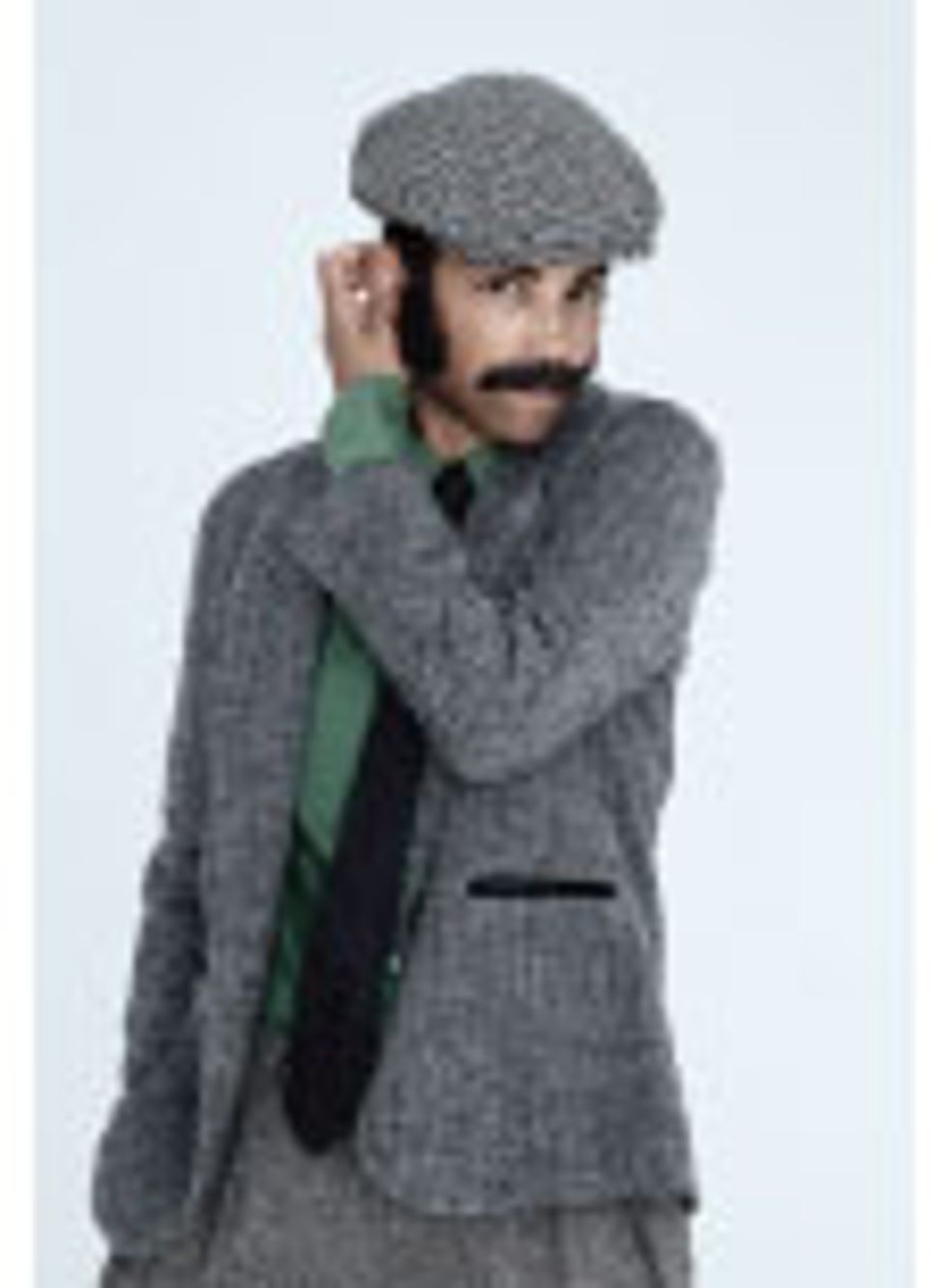 VERONICA WEBB
Veronica Webb is right at home playing dress-up -- but this has nothing to do with her days as a world-famous supermodel. "We practice this a lot at home because usually I have to be the Ken doll," says Webb about playtime with her daughters. These days, Webb's keeping her plate full by training for the New York City Marathon (her third) to raise funds for the Harlem United Community AIDS Center. If she could be transformed into any man, she says, "I'd want Stephen Colbert's mind and LeBron James' body. I'd unite the world with sports and humor." After the shoot, Webb scampers back over. "Actually, no, I would take Angie from Brad and rule the world."

Jacket by IRO, shirt by Boy by Band of Outsiders, pants by Suno, hat by J.J. Hat Center and tie by Burberry. 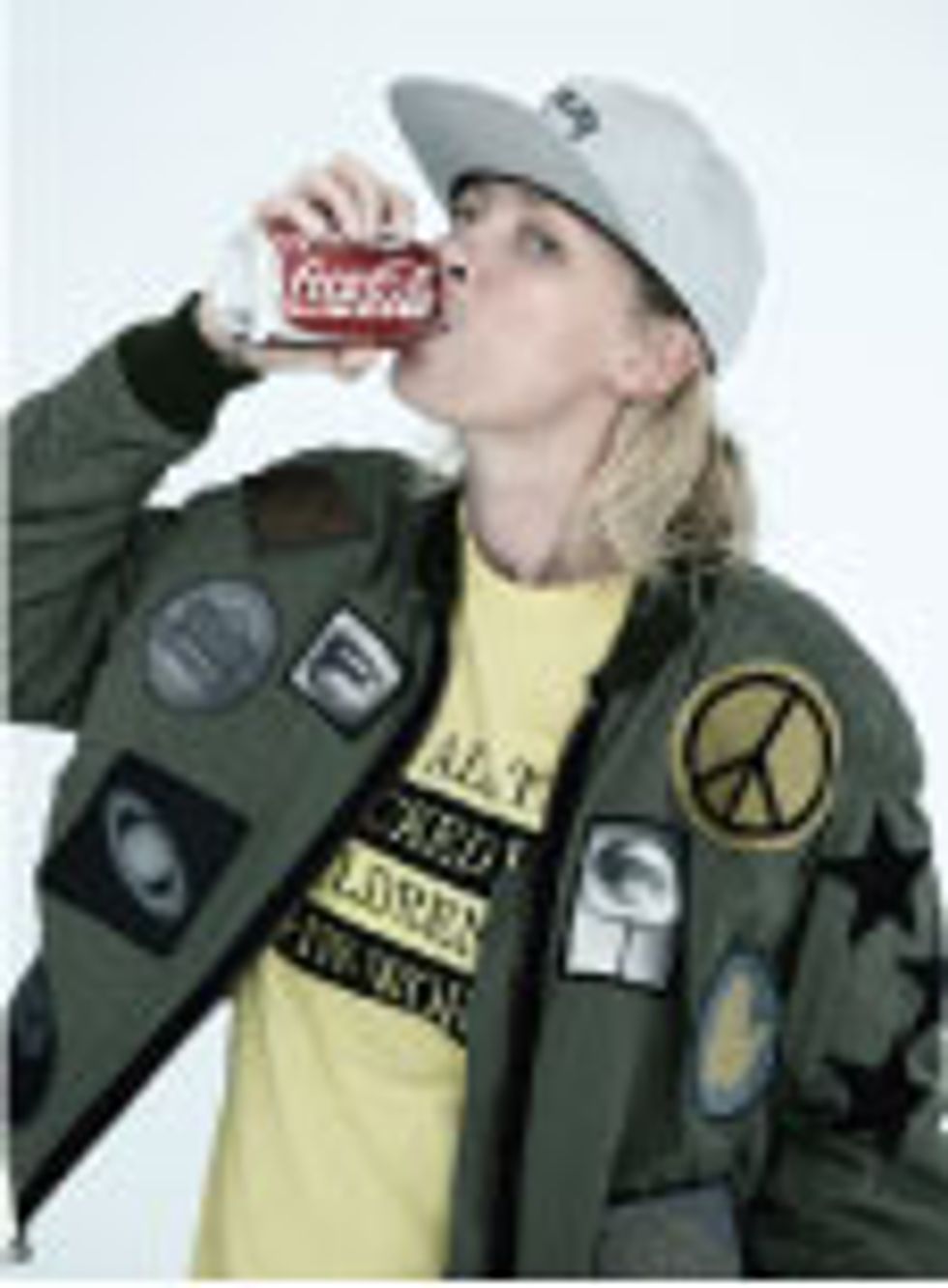 GRETCHEN MOLâ¯
Actress Gretchen Mol will find herself in the spotlight this September, as a showgirl in the hotly-anticipated HBO drama, Boardwalk Empire, set in Prohibition-era Atlantic City. But at today's shoot, Mol ditches the sequins and feathers to look like a kid in a 7-Eleven parking lot -- and she's more than happy to play along. "The more of a transformation I can make as an actor, the more I can get lost in that character," says Mol. "The further I can get away from myself, the more fun I can have." 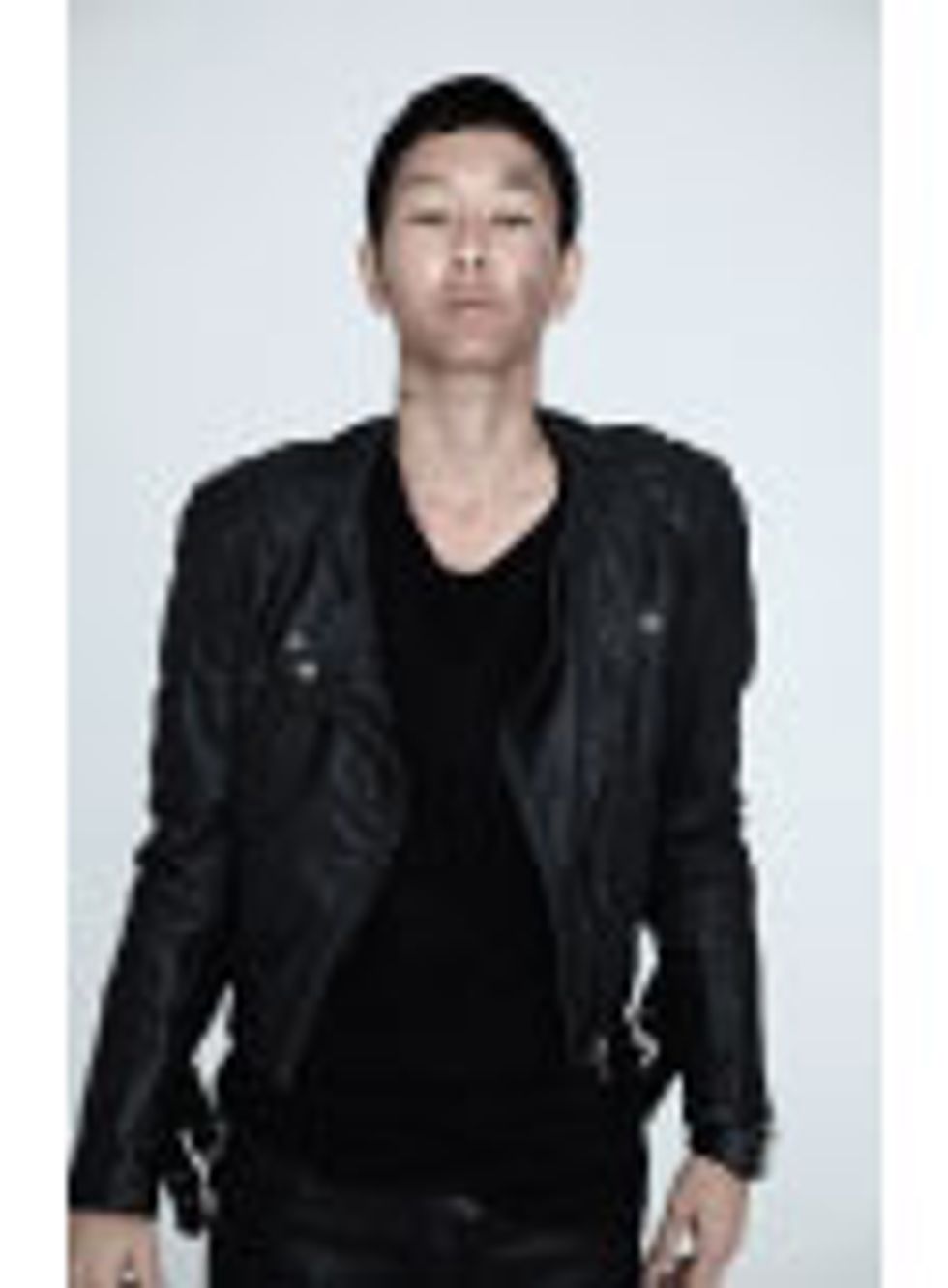 JENNY SHIMIZU
Model, actress and Angelina Jolie's former main squeeze Jenny Shimizu considers herself a "method model." In 1991, she famously donned macho facial hair for photographer and longtime friend Catherine Opie's famous series, "Being and Having." Recent years have found her spending her days as a model and agent at Women Management, and her nights writing a book detailing her life-story thus far, notably "carousing around" the '90s supermodel scene. Before being summoned to pose in front of the camera, she lights up and proudly shares her plans for what she'd do if she got to be a guy for a day: "Blowjobs by fags! Are you kidding me? The best! Woo! I'd be at the bathhouse." 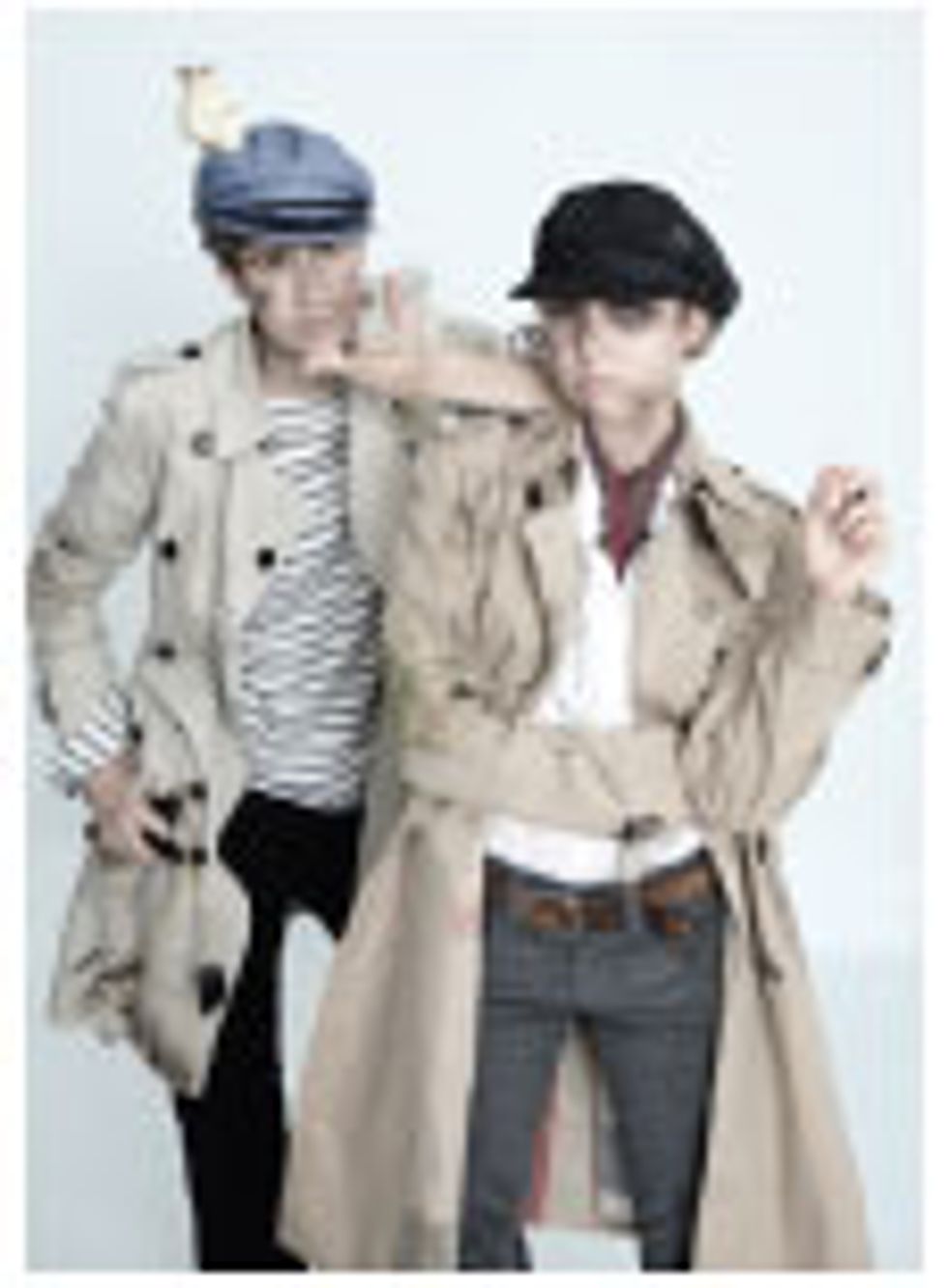 Z BERG AND TENNESSEE THOMAS OF THE LIKE
Rarely seen without heavy lashes and pink lipstick, the Like's lead singer Z Berg and drummer Tennessee Thomas are squirming a bit at having to go butch. They light up, however, when discussing the neo-'60s girl-group's new album, Release Me, and its lead single, "He's Not a Boy" -- "which is quite apropos indeed," says Thomas. The girls just got back from playing with the Strokes in Australia and will head to Europe this fall. So, if you could be a boy for a day, what's the first thing you would do? "Fuck a girl," Berg blurts without hesitation. And Thomas? "Pee on a wall." 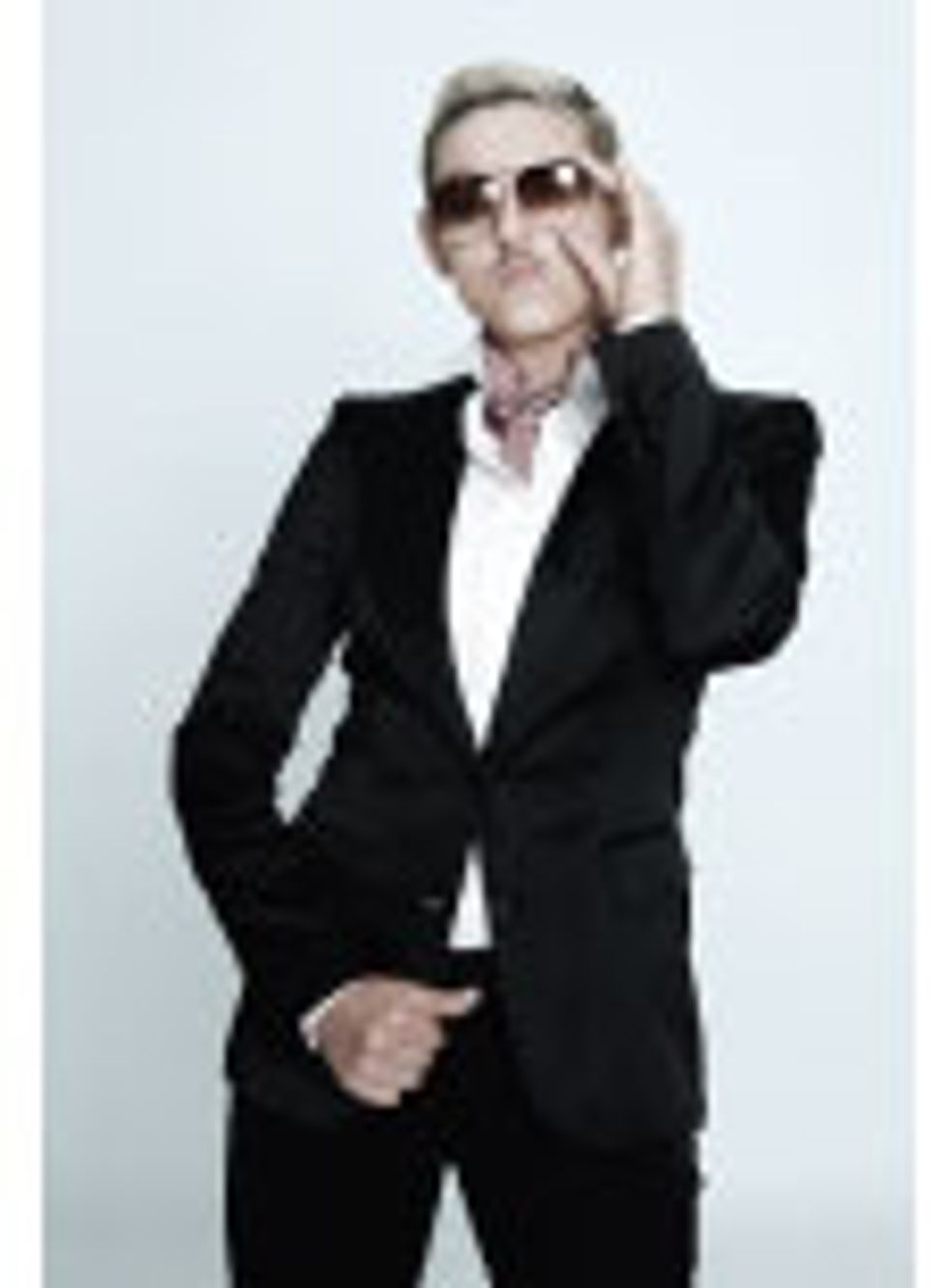 ROSSON CROW
Artist Rosson Crow has no qualms about tapping into her macho side. Up next for the L.A.-based painter is an exhibition at the Contemporary Arts Center in Ohio this November, featuring work inspired by the testosterone-drenched world of motorcycles (coincidence?). And after that she has a solo show at L.A.'s Honor Fraser gallery. On getting dandy-fied for the shoot, Crow says, "I'm fascinated with dressing up and how it can play into the power of gender stereotypes and relationships." 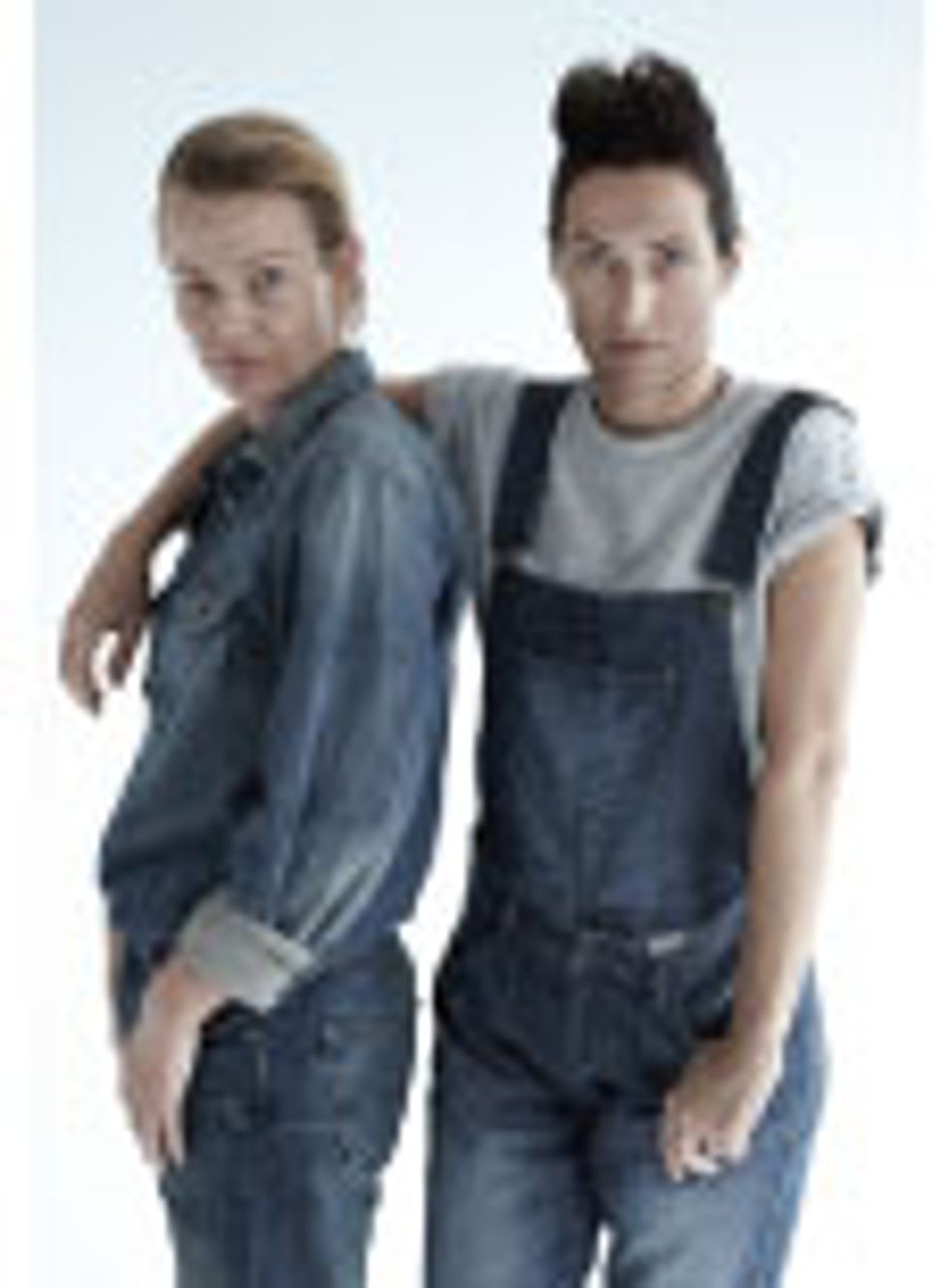 SAMANTHA MATHISâ¯
"Someone just said I look like Terry Richardson!" squeals Samantha Mathis. An acclaimed film and stage actress, Mathis has had her fair share of layered roles ("I've certainly played old and dying"), but this was her first time playing a man. "At first I was really uncomfortable," confesses Mathis. "As a girl, you spend time in the mirror looking as best as you can. But once I let go and knew the direction it was going, it was actually liberating." Mathis is adding two other firsts to her resume -- doing improv of the most "bananas" kind in upcoming episodes of Curb Your Enthusiasm, and putting on the producer's hat for a TV series that she's been working on for the past six months.
JOSEPHINE MECKSEPER
New York-based, German-born artist Josephine Meckseper felt right at home with her buddy Samantha Mathis at the shoot. "Whenever I go shopping, I always look at the men's stuff. It's always way cooler than the women's," says the conceptual artist who has an upcoming solo exhibition of her work at the FLAG Art Foundation. Don't expect to see her in a dress on opening night. "I had to go to all of these benefits recently, and I felt extremely uncomfortable because I had to wear a dress." So what is her garment of choice? She fancies tight pants "because they show off my butt really well" and "bullfighter outfits from Spain." 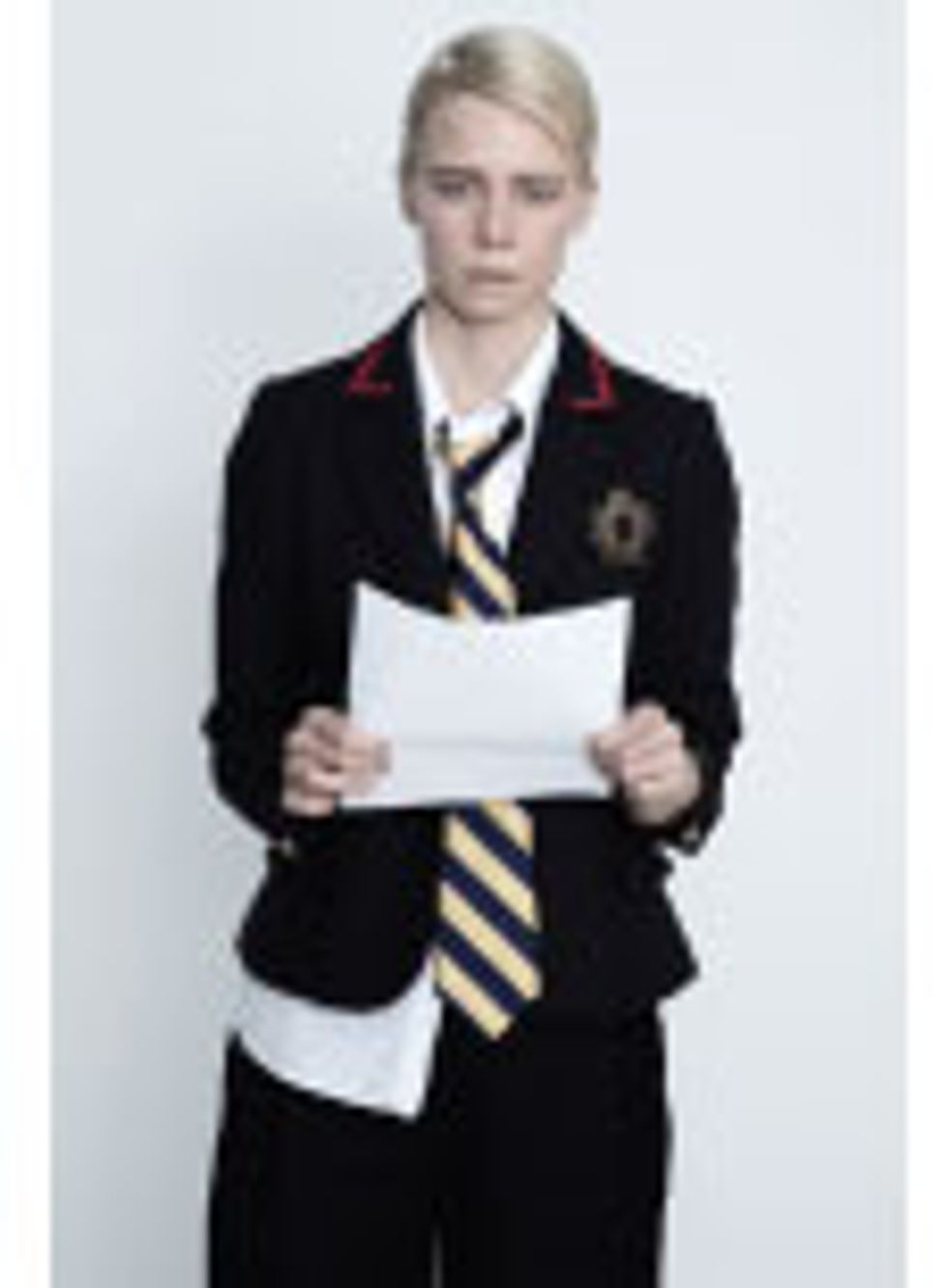 ERIN FETHERSTON
Erin Fetherston looks about as rugged as an unweaned kitten. But her transformation into a fellow is not as big a leap as you might think. "I've started to wear pants a lot, having been a dress-only girl for so many years. It's interesting to have a balance." Fetherston is busy working bi-coastally as a creative consultant for Juicy Couture, having just completed their first Holiday 2010 capsule collection. She's now gearing up for New York Fashion Week, where her eponymous line's girly-girl designs will float down the runway. 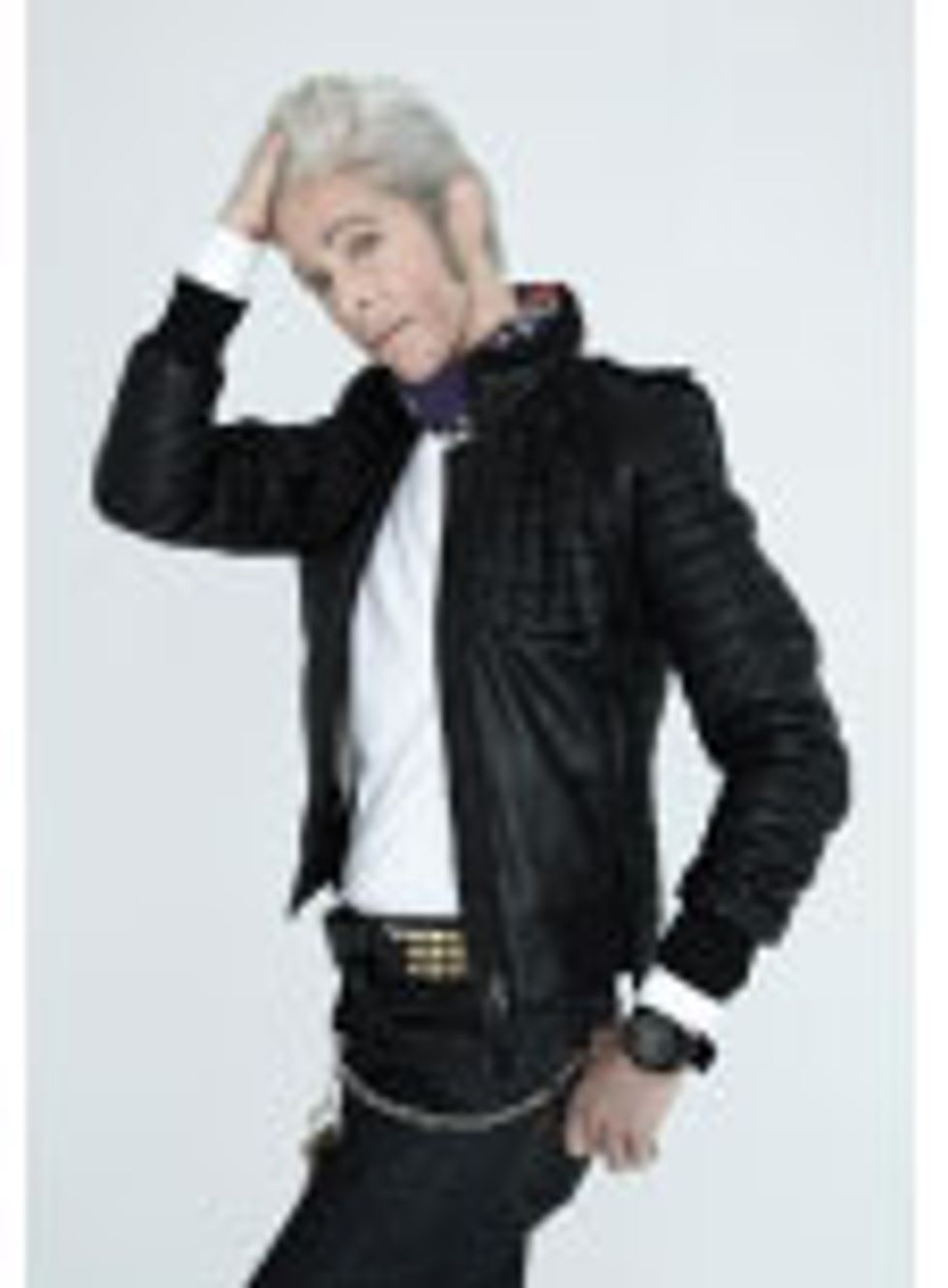 LINDA FARGO
As she gets her makeup done, Linda Fargo recalls, "My gynecologist once told me that I have a lot of testosterone. And I actually thought that was fabulous news!" The senior vice president of the fashion office and store presentation at Bergdorf Goodman grabs the pseudo bulge in her jeans, runs her fingers through her pompadour and suggests an ACE bandage to complete the look. "You know, the Hilary Swank in Boys Don't Cry thing," she says, minutes before sashaying off into the real world in a white dress and Givenchy heels. 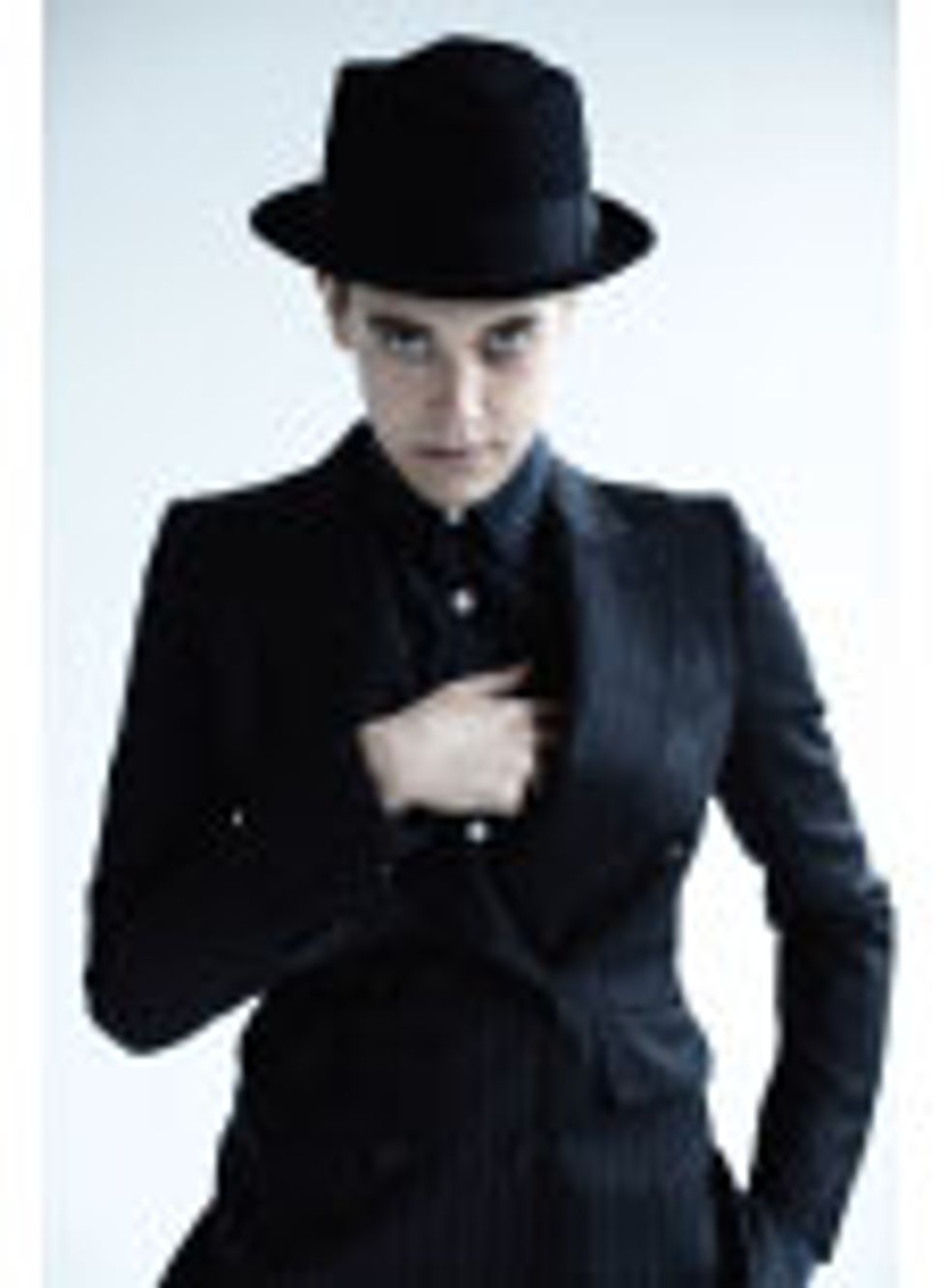 BYRDIE BELL
Byrdie Bell's got the whole package: the Madonna-esque gap between her teeth, legs for days and an amazing, amazing name. At today's shoot, the New York It gal is showcasing her true passion: acting. Coming up for the model/actress are two short films. The last time she dressed in drag, she says, it was for a Russian play by Nikolai Gogol, for which, in true Byrdie Bell form, she wore her own costume: "A beautiful satin Valentino jacket," she recalls. 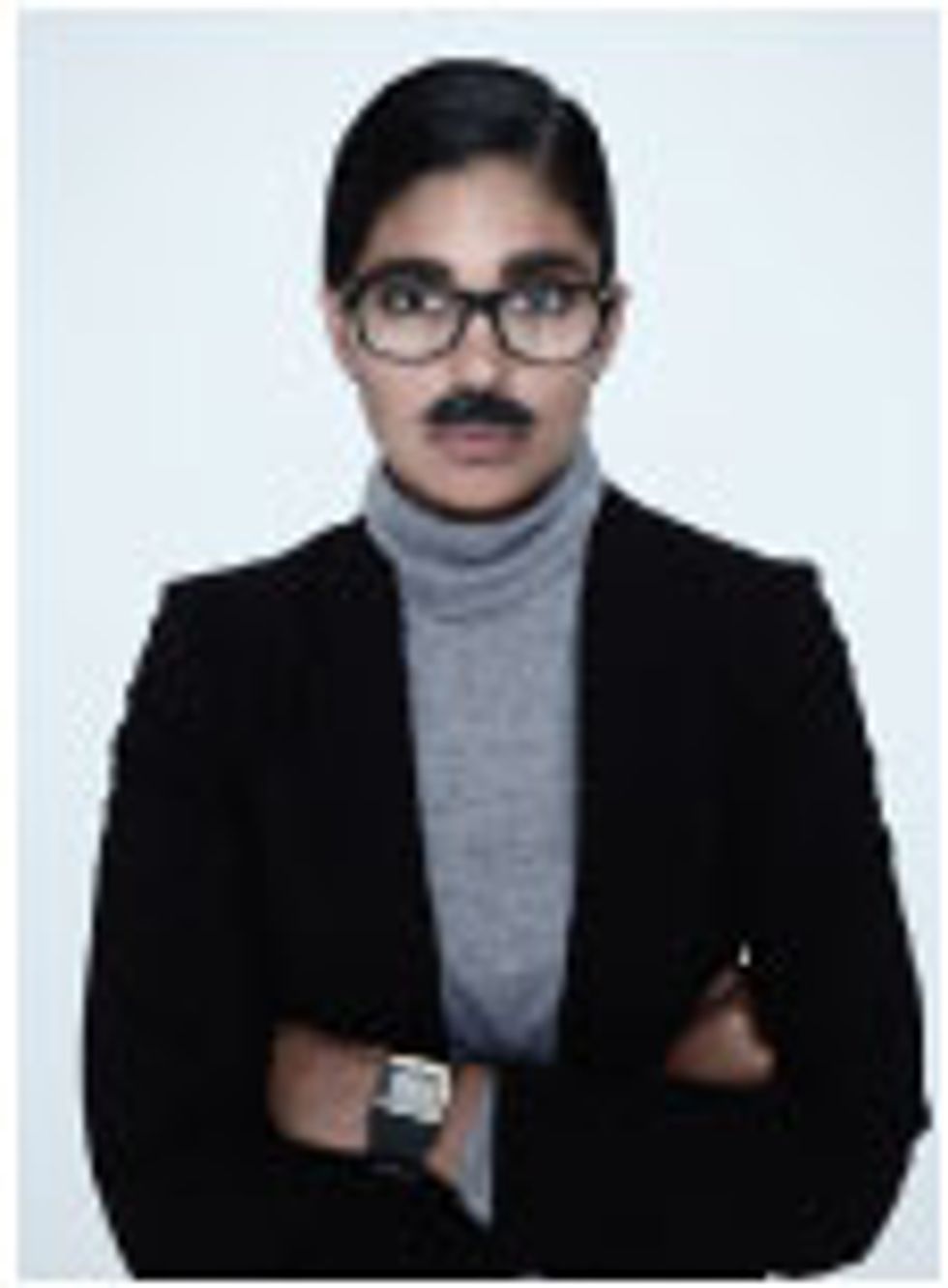 RACHEL ROY
When asked if she was an actress in a former life, designer Rachel Roy bursts out laughing. Roy insists that the clothing (and removable scruff) contributed to her impressive performance in front of the camera. The accomplished designer is getting ready for her New York Fashion Week show and a Fashion's Night Out fÃªte at Macy's co-hosted by Jessica Stam. Roy had a ball playing dress-up, but that's as far as it goes for the day's virility. She turns to her adorable daughter Ava and asks, "What did I always tell you growing up?" Ava gets shy, clams up, and Roy answers her own question: "Girls are better than boys." 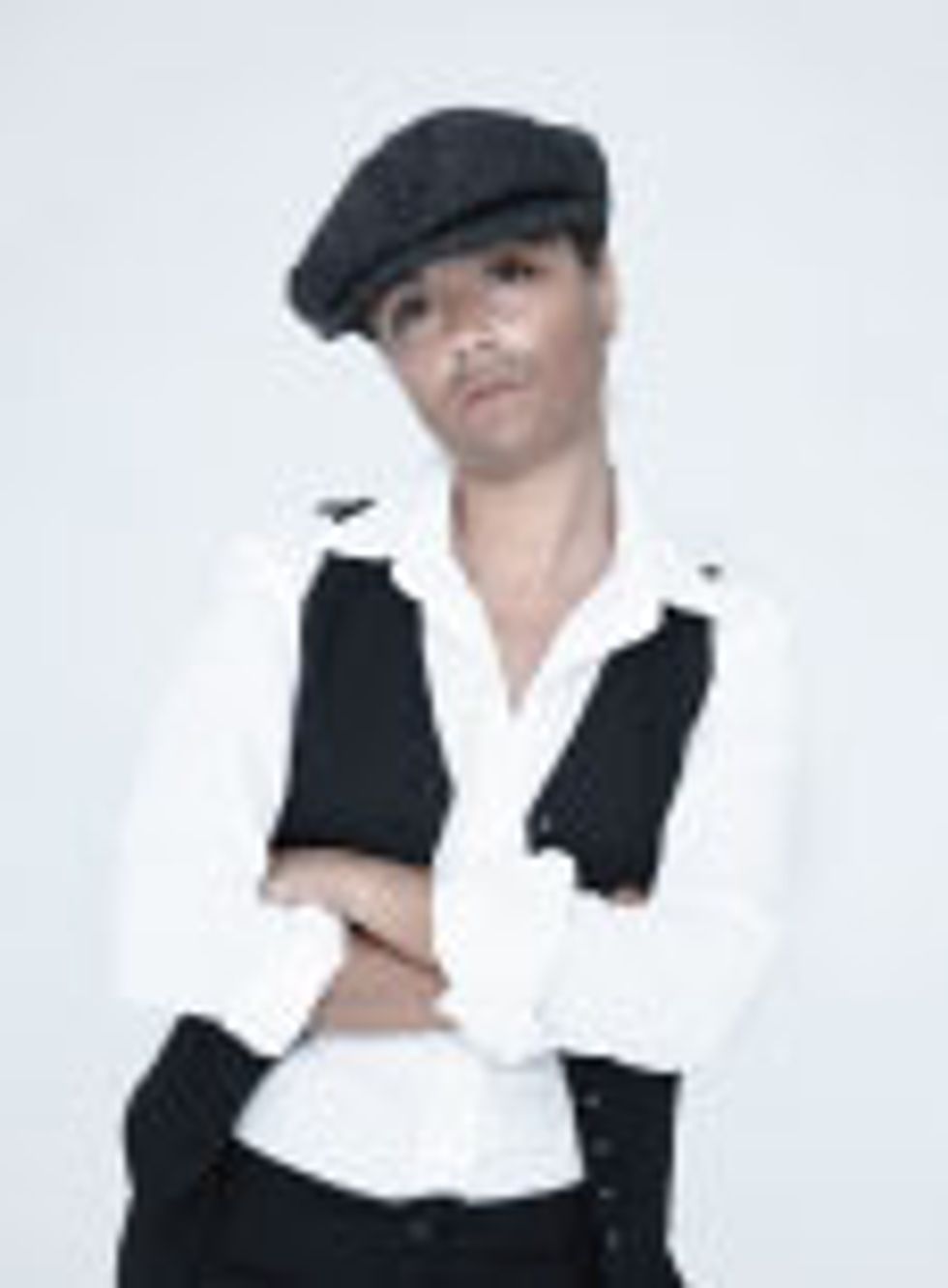 Designer Charlotte Ronson's eponymous, nearly decade-old line has become a tried-and-true go-to for chic girls with a slight downtown edge. Going into the shoot, Ronson didn't realize that she'd be sporting a mustache; she blames this confusion on misreading an e-mail. But Ronson was a total champ and surprised by how simple it was to pretend to be a man for the day. "It was really easy. I just had to stand there and be serious and not smile," she says, adding, "and I'm very good at that." 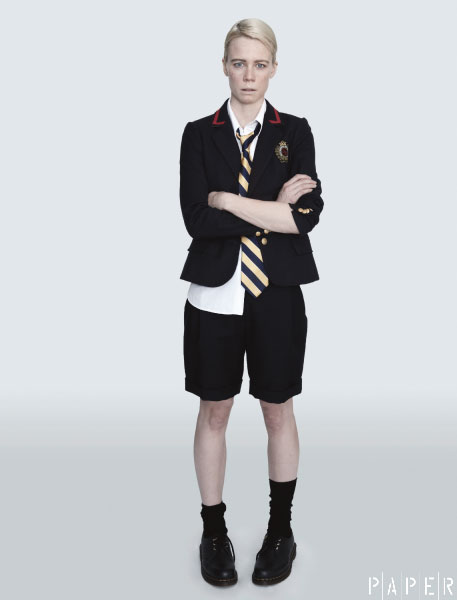 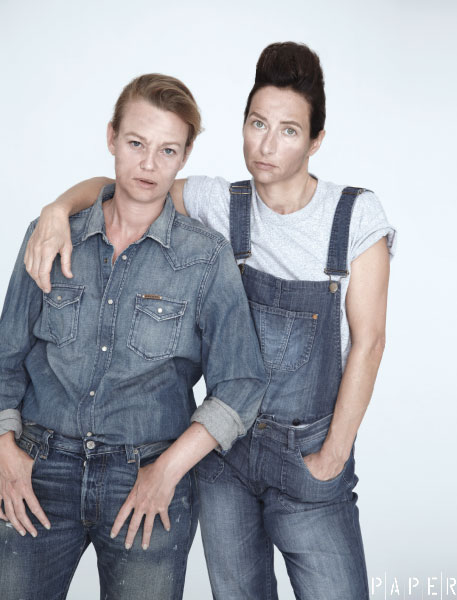 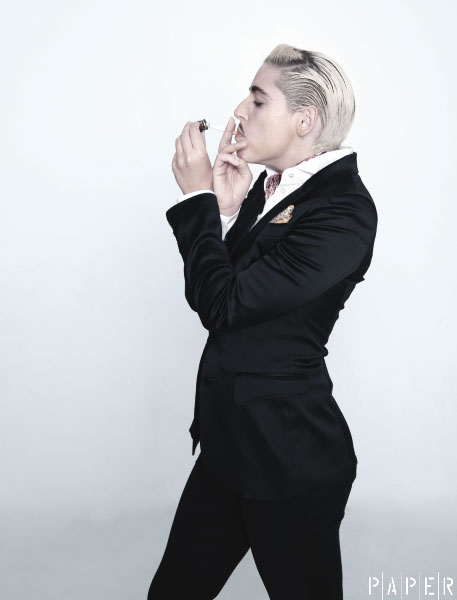 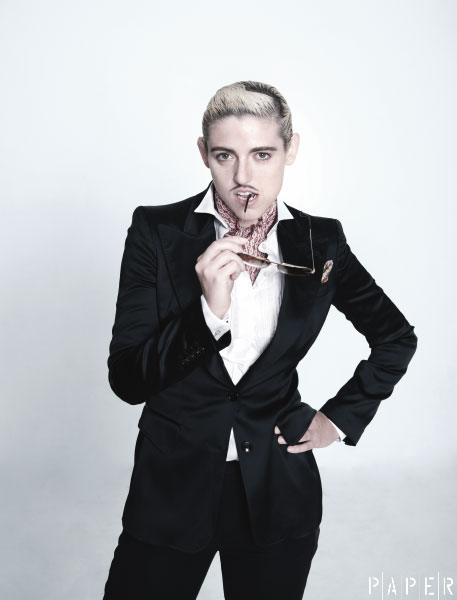 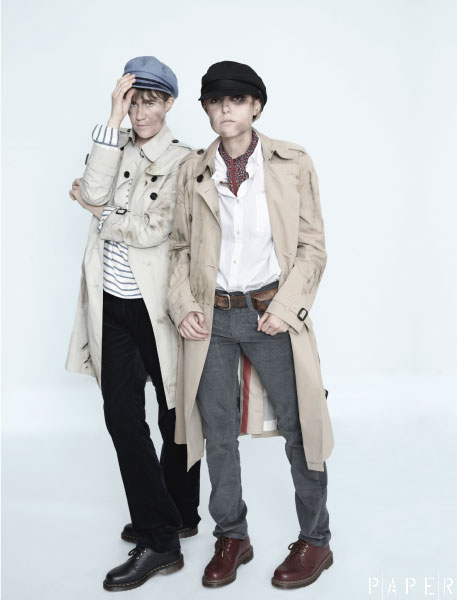 Previous Next
(l-r) Tennessee Thomas and Z Berg, musicians (The Like) 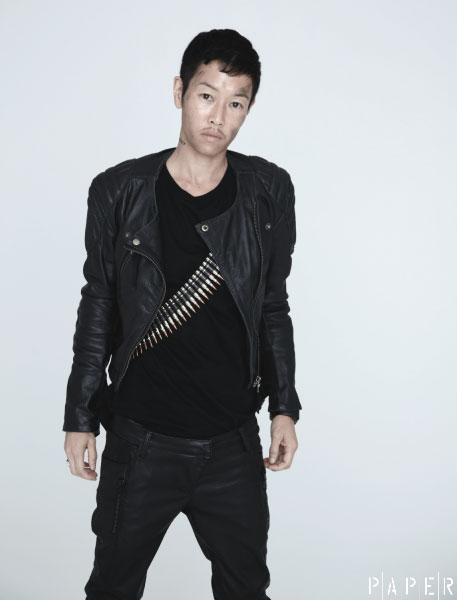 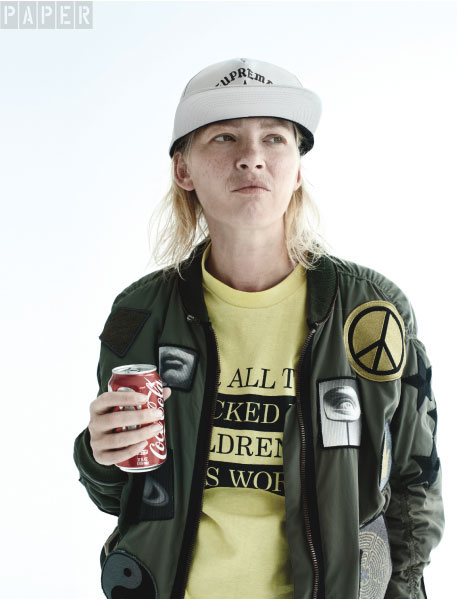 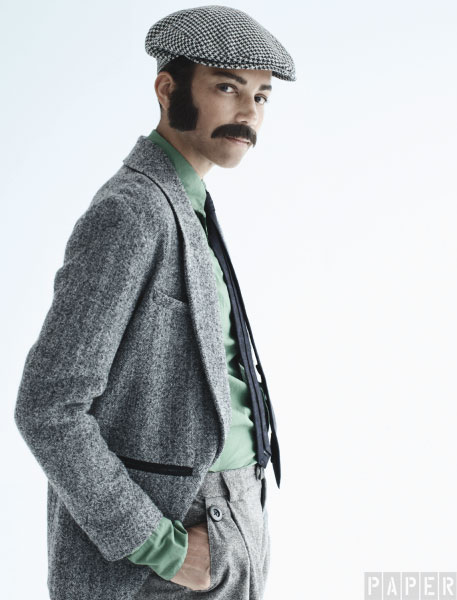 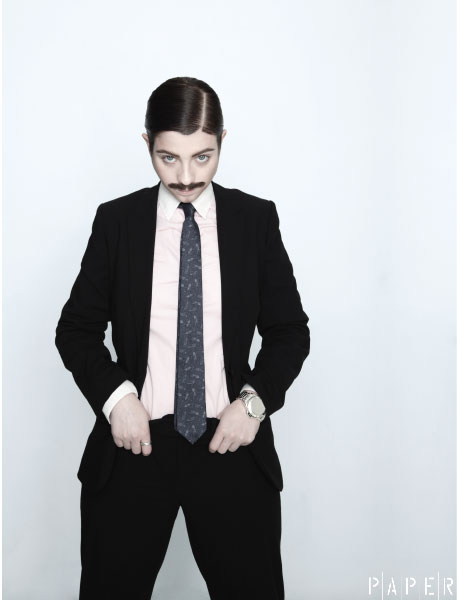 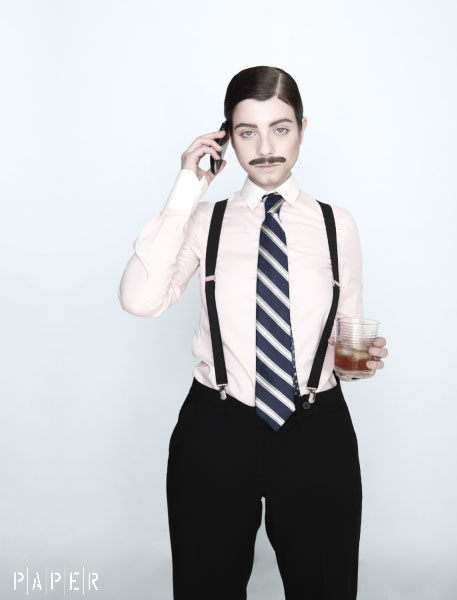 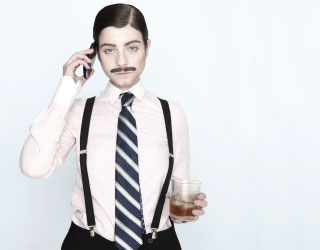 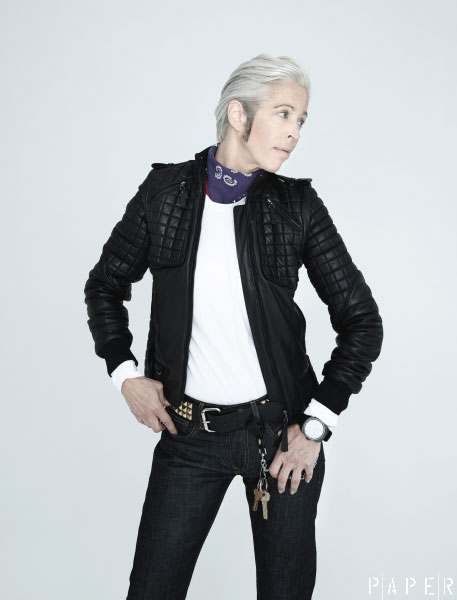 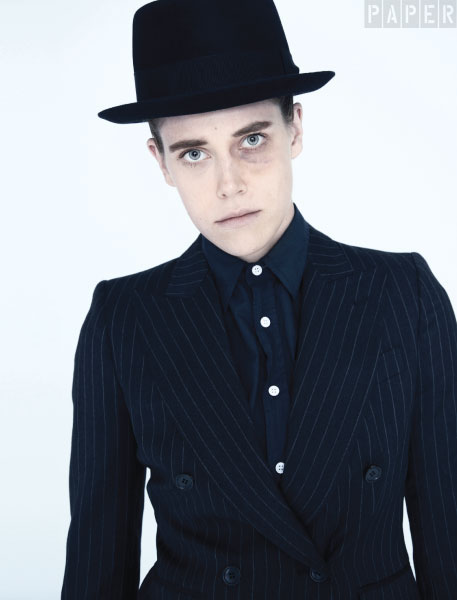 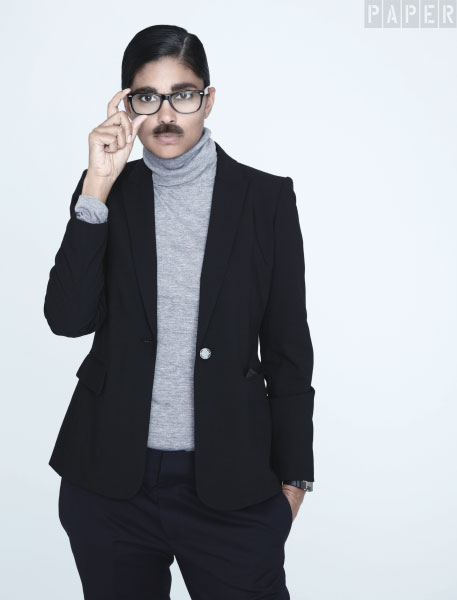 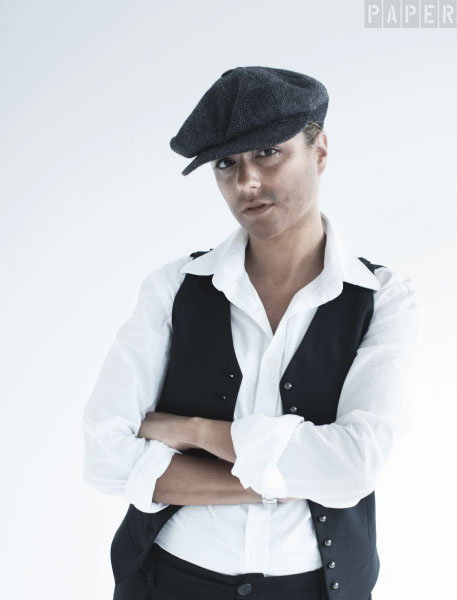 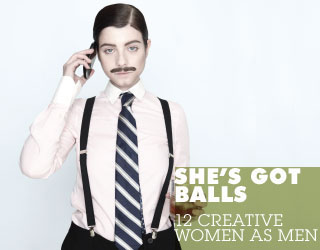