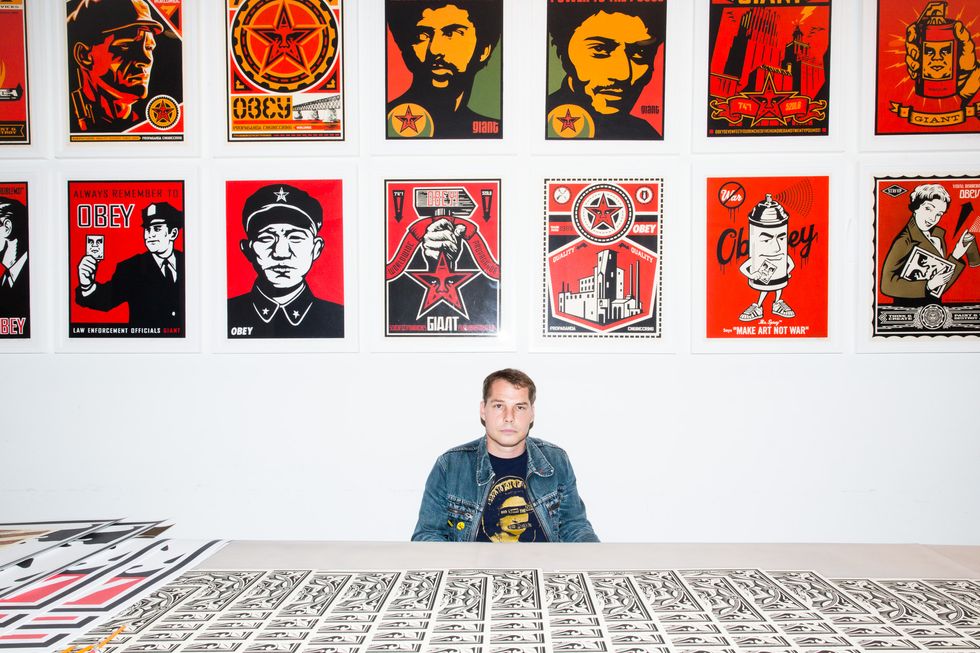 What's remarkable about meeting Shepard Fairey for the first time is that after a 24-year long career filled with staggering accomplishments that include his now-iconic "Obey Giant" and Obama Hope posters, the street art master still comes off as the most humble, genuine, intensely principled dude ever. We recently had the chance to catch up with Fairey in his Studio Number One headquarters in LA, where the artist, clad in his perpetual uniform of punk band t-shirt and denim jacket, gave us a sneak peek at his latest collaboration, a limited-edition bottle for Hennessy. We took the opportunity to talk to him about his ongoing motivations, inspirations, dream collaborations, charitable endeavors, jail, anonymity, politics, publishing, NY vs. LA, and more. Excerpts from our conversation, below.

I know you were the guest editor of PAPER's art issue, with Pharrell on the cover, back in 2010. You mentioned when I came in that [PAPER founders] Kim and David also sponsored your first show in New York? Can you talk a little about that?

I've known Kim and David for 20 years...The first gallery show I was in, in 1994, was at the Alleged Gallery on Ludlow Street. Kim and David sponsored it and [PAPER art critic] Carlo McCormick was the curator. At that time, I was doing a lot of bombing in NY, posters and stickers and stencils, but I didn't know anyone. Connecting with the guys from PAPER was a real breakthrough period for me.

In addition to Hennessy, you've worked on designs for a diverse client list that includes NASA, the ACLU, and the Rolling Stones. If you could choose one dream collaborator or client, who would it be?

David Bowie. He's been such an inspiration to me in terms of his music, his ideas and his aesthetic sensibility. A lot of my heroes I've gotten to meet and work with, but I've never met him. My favorite stuff is the stuff from the '70s, up until, maybe, "Let's Dance," but even his most recent record is a strong record. I'd like to do something with him at some point.

You've done a lot of nonprofit work and work of a political nature, the Obama HOPE poster being the most famous example. What have been the most important projects to you over the years, and when did you start doing this kind of work?

As soon as I could afford to do charity work, I did. Probably in the early 2000s was when I started donating to things like the Chiapas Relief Fund, and I've always donated prints to school auctions, and bigger organizations like the ACLU, Feeding America, and The Art of Elysium. It happened organically; the more charities you work with, the more charities realize your willingness to do this kind of work, so people reach out to you. As far as what I'm most proud of, charity-wise, when the genocide in Darfur was at full intensity, I started working with a guy named Brian Steidle, who wrote the book The Devil Came on Horseback. I worked with him on the "Hope for Darfur" campaign, which seemed to really help get the word out. Also, through my Obey clothing line, we do what's called the Awareness Program: every season we choose a charity to work with and give 100% of the profits of a graphic that I've made into a poster and also a t-shirt. We raise anywhere from $50,000 to $300,000 every season.

As far as a cause, the "Hope" poster for Obama was an unbelievable explosion of things happening that I didn't expect. That was just one thing in line with the other things that happened to go viral and become really big, but I'm not more proud of it just because it became what it became. When you look at the narrow parameters of our political systems, the fact that something that came from outside of a corporation, outside of the parties with their ranks and hierarchies, that it was genuinely a grassroots tool, made me excited about the potential for democracy to work outside of these elitist channels, regardless of my unhappiness about how Obama's been as president. Drones and domestic spying weren't what I was hoping for. But, this is the only democracy we've got; I'm not giving up on it.

Street art is, of course, illegal. You've been arrested 16 times, but you haven't stopped. Why is it still important to you to work in the street?

Street art is important to me because it goes directly in front of people. There's no bureaucracy. People say, "Oh, well, the Internet goes directly in front of people," but it doesn't have the same visceral human connection. I consider street art to have courage and defiance and something tangible; when people experience that, whether they like it or not, there's a greater impact. Some people are ired, some people are inspired. Also, it's something that anybody can do, as long as they're willing to deal with the consequences if they get caught.

What's always been important to me is self-empowerment and a do-it-yourself approach. I come from skateboarding and punk-rock culture, where it wasn't about virtuosity, it was just about "make it happen."

What's the longest you've ever spent in jail? Are you worried about authorities trying to make an example out of you again?

I was charged with 32 felonies in Boston; I could have faced 80 years in jail. But the longest I've ever actually spent in jail is three days. I've had to pay a lot of fines and I've been on probation multiple times. I'm a diabetic and the only tattoo I have says "diabetic," because every time I was arrested early on, they would take my insulin away. It's barbaric; I'm not a drama queen, but I've feared for my life several times in jail, and gotten incredibly sick. You're in there and you think that the criminals are barbarians, but the people housing the criminals are some of the most sadistic people I've ever encountered (and I've been around some hoodlums). It comes with the territory, and I'm really careful now, because I have a wife and kids, and I don't want to lose my life in jail over street art. Now I have an insulin pump, so it's a lot harder for them to take that away.

This studio location doesn't seem confidential. Do other street artists and aspiring artists put pieces on the building trying to get noticed by you? What's your take on anonymity as a street artist?

Yeah, our building's been tagged a couple times, and people drop stuff off. It's interesting how our culture works. Sometimes you get to a certain point and there's a backlash. Some people just assume that my head's gotten big, that my ideas have changed because of success, so they ignorantly lash out at me. It comes with the territory.

One of the things that I decided when I was arrested for my first really big billboard stunt in 1990 -- when I changed the mayor of Providence's billboard around -- was that I'm inevitably going to be caught, and so whatever I do, I want to feel like I can stand behind it. Even if it's illegal, I want to say that I'm a taxpayer and I think public space should be for more than just advertising. I don't want to keep my identity a secret just because I don't want to take responsibility. I don't want the cops showing up at my place and arresting me, but I've never tried to make what I do and why a secret.

Have you met Banksy? What is your impression of him and his work?

You're originally from South Carolina and went to school on the East Coast, in Providence, but you've been in LA for a while. Why do you choose to stay in LA vs NYC or somewhere else?

I moved to California to work in the skateboard industry in San Diego and I realized there wasn't that much going on there, so I started driving up to LA. I really like how it's got all these different pockets and cultures from Latino to Asian to Armenian. Everything here is diverse. It's not that NY isn't diverse, but in LA, the weather's good and space is affordable, and there's good culture here. I lived in Providence for 8 years and spent a ton of time in NY, and almost moved there in 1996, but I felt like NY was already expensive enough at that point that if I couldn't make it in a short amount of time, I was going to have to get a crappy job just to survive, which would keep me from being able to focus on creative things that I believed in. I felt it wasn't worth that risk. But NY has always been my favorite place to do street art because there's so many people per square mile, and because people walk, so they can stop and stare at something for a little while.

Have you ever thought about doing another magazine like Swindle?

With Swindle, we were spending so much time making no money. There's so many things that I can do where writers and photographers and fashion editors won't be mad at me... why spin my wheels with that? I enjoy the team effort, but people in the creative realm are perpetually dissatisfied, and it wore me out. I'm perpetually dissatisfied too, but it's towards my own work, so at least I'm my only enemy.