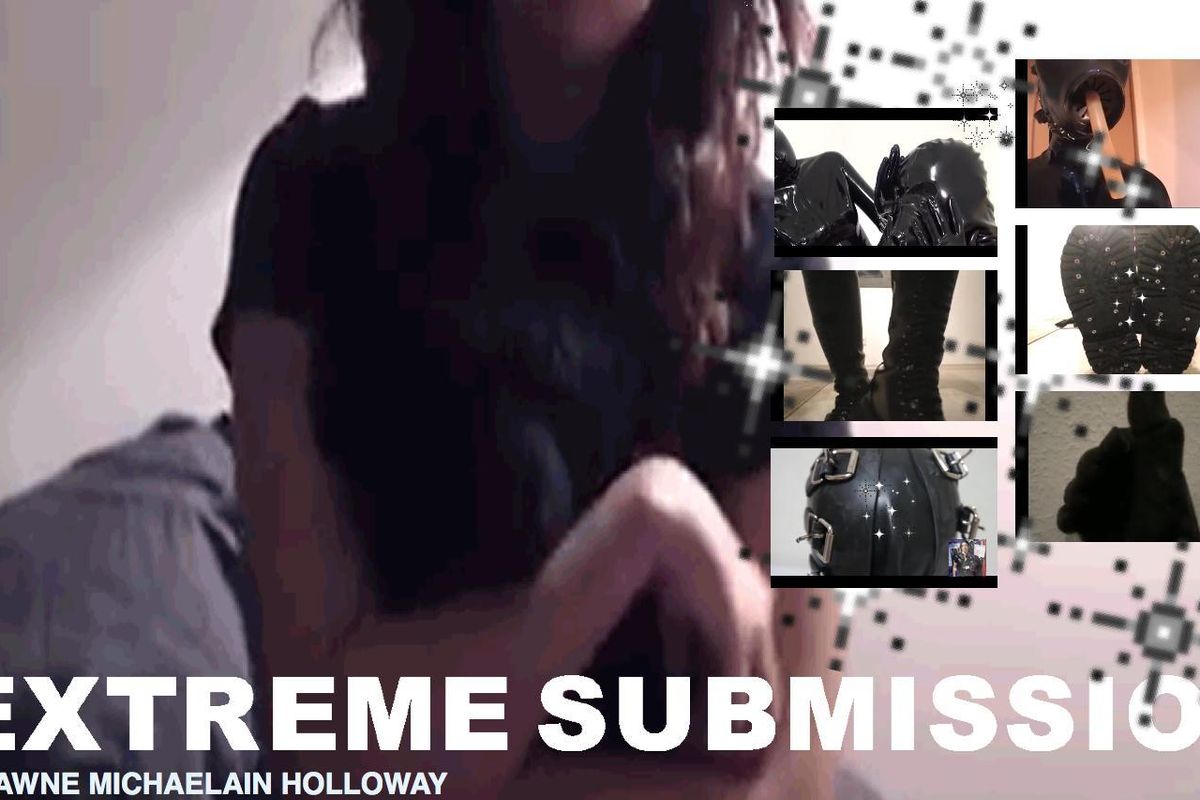 Composed of three separate works ("Extreme Submission Validated," "Preritual Status" and "Using Tools That Use You"), Extreme Submission addresses ideas surrounding power dynamics, sexuality and intimacy -- and how it all fits into the endless creative possibilities of the Internet. However, it's also a series inspired and best contextualized via a viewing of Jean Genet's controversial 1950 film Un Chant d'Amour, which also spurred Holloway's exploration of her own identity as a queer black individual involved in the BDSM community. As such, we spoke with Holloway herself via Skype about everything from the project itself to intimacy in the contemporary online realm.

So, I was watching the Jean Genet film in the office earlier and someone walked by and was like what are you watching?

You're like relax, it's art. That piece actually I think really sums up the kind of vibe that I'm going for in every single one of my pieces -- like regardless if that's video or sound, I want a kind of romantic hardness. I'm trying to get some messages across, whether that's visually or contextually -- but I want to do it in a way that's more alluring than "fuck you."

Yeah, I'm pretty punk rock when it comes to like it comes to talking about stuff. Like I'm not afraid to say things. But because I'm trying to live in the hearts and minds of my viewers more or less -- who can be anyone, I'm not looking for a specific viewership with any of my work -- I really try to be as relatable as possible, because I do realize that a lot of my work comes off as very inaccessible. I'm not trying to be evasive in any sort of way, it just comes with [a viewer's] lack of participation in the sort of [fringe communities] that I'm talking about with my work -- which in the Extreme Submission series would be being a woman of color [in BDSM].

Right, but let's talk about how in between Extreme Submission and Un Chant d'Amour, and how there are a lot of interesting comparisons of setting and medium at play.

I haven't been engaging much with these cultures anymore, so I'm commenting, and that's been a point of contention for me because what I used to talk about was what it meant for me to find a voice through my participation in these cultures. And now that I've been able to kind of find a voice and be heard and seen through art outlets, I'm finding a new way to approach the topic. I don't want to perpetuate any images of weakness, like I'm very conscious of the power that I have and I'm going to exercise it in a way I want -- because I was given it. Like why not? I'm not going to marginalize myself for any reason.

So Extreme Submission is the act of remaining aware and kind of following the rules that are present within these power structures that come from the sort of binary relationship of being on and offline, of playtime and not playtime, of being outside and inside -- the different kinds of relationships that provide us with a certain kind of intimacy. And the way that I see that Un Chant d'Amour connecting is that we are all kind of prisoners inside and outside of these spaces. When we are not in one of those spaces, we're thinking about those spaces. For example, the phone. When we're not on our phone, we're like, maybe I should check my phone. Or, when we're not having sex we're like, oh damn, I would really like to have sex. You know?

It's interesting you mentioned cam culture. How does voyeurism play into Extreme Submission? Obviously Genet's film has a huge element of voyeurism built into its narrative structure.

You know it's crazy because that "Closing the Loop" article by Aria Dean just came out. Did you read that, by any chance?


On The New Inquiry?

It's really eerie to think about it that way.

It's weird. But in the same way, [Un Chant d'Amour] is that exactly, because you're looking at [the guard, who is basically a prisoner of himself] looking at his desires...looking into these fantasy spaces, [but it's] actually just reflecting back on himself. So he's looking at looking, looking at looking. It's just this really weird refraction thing that's happening.

Right, and so how does this idea play into the power dynamics of Extreme Submission?

This particular series is going to address that a whole ton, particularly my relationship with white men. I think it's hard for me because it's literally [addressing] my personal relationship with the white guys that I am sexually active with -- but I think you could go forward and replace this particular white man [I'm speaking about] with a larger kind of white, patriarchal grasp.

I think it's just interesting though, as a fellow woman of color involved with white men, to talk about fetishism and the stereotypical role submission and dominance play within that concept.

Every time I talk about it I think I find new things that I'm feeling at that moment, because it really is about feelings. Extreme Submission to me is the act of just feeling like a submissive to literally everything. [Not by nature], but by structural oppression and the identity that I embody. I find that I feel submissive to it and that I gain satisfaction by [ruffling with it] -- but it's also very isolating.

"Using Tools That Use You"

Speaking of gear, in "Extreme Submission Validated" I was intrigued by the particular equipment that you decided to utilize -- like what made you choose those particular videos with the suction masks and long boots and whatnot?


They're mostly just identity-hiding tactics and I thought it was really interesting, because it's on Youtube. Youtube is something that you don't see fetish on and I found it really exciting. Like the boot guy is gayleatherboy49 or whatever, and I was fascinated because to get on there [was submission] -- to hide his identity and highlight something that's actually not about him, [because he feels] this dedication and love toward his boots -- this is extreme submission. This is the kind of obsession and dedication and feeling and intimacy that we feel with our computers. You know? He feels that towards his leather.

Out of curiosity, why choose NewHive as a platform? Was it because it has a very open sort of DIY nature?

Because it's a sketchbook...it actually ended up being a really awesome way to prototype video. I find that I wouldn't have made the same video decisions in the last week that I have [today] if I didn't have NewHive beforehand. Because I spent quite a bit of time on those, but the fact that NewHive is a sketchbook of sorts for internet artists is important because I think it helps get material across for people, like me, who don't produce that much...in a way that's relatable and fun and easy to access. It's kind of like the haiku of internet art. It's cute.

For sure. So to wrap up, can we also talk a little about how sound functions in these works?

Yeah, totally. I was really excited about how I could take the sound from the videos and actually use them as samples or whatever in the piece itself...But I always try to carry a buzzing through everything I do [like in the first two pieces].

Actually, I think in [this talk I'm doing], I will have a buzzing like a low drone, or something. I just find that it dissolves and softens a lot of attention. Like it brings the experience out from the computer screen and into a more vibrational sort of thing. Especially on big, proper speakers -- I think it has an impact on the work. This goes back to being really conscious of having everything not be sharp-edged. But then on ["Preritual Status"], I was just trying to kind of mimic a computer on-screen, just because it was a browser.

The compromising one was [for "Using Tools That Use You"] -- the Eartha Kitt interview sample...I was really interested in how she was talking -- her face when she's being interviewed was almost like she was saying, "Well, fuck men." Like I would never submit to somebody else's will, but also why would anybody expect me to like surrender? [That's what that] NewHive was trying to say...like questioning the nature of the circularity of surrendering and submission. She was like, "Why would I ever surrender my identity -- literally give it to you?" because submission is almost squashing, and surrendering is like giving up something intentionally in exchange for something else -- which is usually freedom or some other mobility.