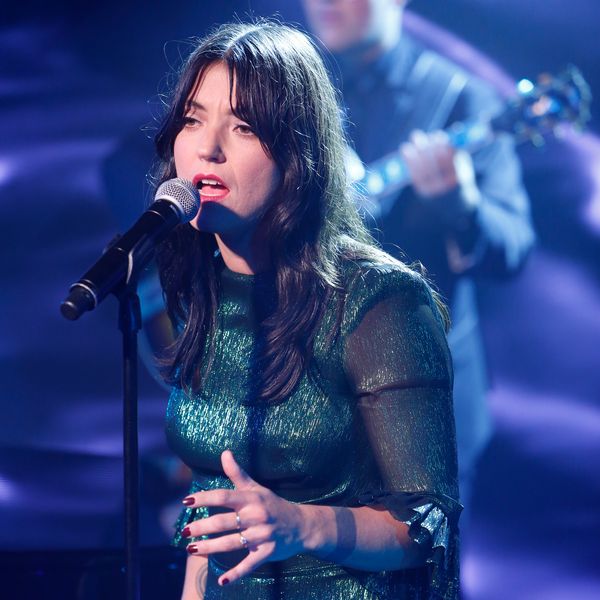 Supported by her signature electric Fender Jaguar, Sharon Van Etten takes on "Hurt," the 1994 Nine Inch Nails classic as part of the cover series, 'Songs That Found Me at the Right Time,' presented by Sounds of Saving in a partnership with the National Suicide Prevention Lifeline.

In honor of Suicide Prevention Month, the indie rocker delivers a poignant rendition of the Trent Reznor-penned song, capturing the sentiment of battling depression with breathy, raspy and withering vocals. "I hurt myself today/ To see if I still feel," she sings, visibly feeling the weight of each line. "I focus on the pain/ The only thing that's real."

As the video opens, Van Etten details her own mental health journey: finding strength in vulnerability, bonding with others through opening up and learning how to "ask for help when needed." "One thing I'm still trying to hone as an adult is not shying away from acknowledging my emotions, but letting myself go there," Van Etten says to the camera, before describing her experience with the track in her youth.

When Van Etten was learning guitar as a child, she explains, her older brother gave her a box of cassettes. Ultimately, he introduced her to Nine Inch Nails' industrial rock classic, The Downward Spiral, with "Hurt" as its concluding song. Through hearing the record and final track, Van Etten connected with her brother on a deeper emotional level. She also credits her sister as someone who "checked in" with her when she was struggling, without ever judging her but instead simply asking how she was doing.

"Sometimes it does take an outside perspective for you to understand yourself better," Van Etten continues, letting viewers know that they aren't weak for opening up about their "darker times," but "stronger."

After Trent Reznor's searing lyrics on "Hurt" caught airwaves in the late 90s, they famously moved Johnny Cash, who also covered the track in 2003, just before his death. With her own 2020 rendition, Van Etten proves its vulnerable and raw sentiment is as real as ever, and can be comforting to anyone struggling in the most uncertain and turbulent times. In the hours following its release, Reznor himself has since retweeted a link to Van Etten's performance.

If you are experiencing suicidal thoughts or know someone who is, the National Suicide Prevention Lifeline and related resources can be found here, or reached by phone at 1-800-273-TALK (8255).