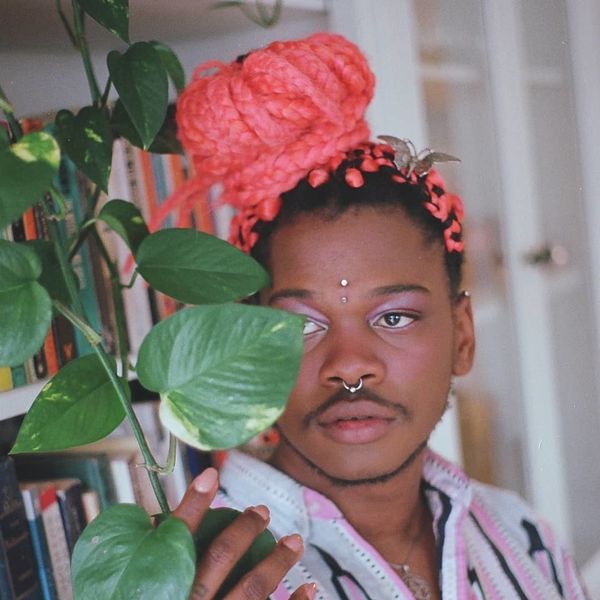 "I've always said, at the very beginning of my career, that all of my songs start out as country songs. Most of my songs are just me on my porch with my guitar," Shamir tells me. It makes sense that, to Shamir, along with many other country fans, country music is synonymous with a minimalist aesthetic, structure and sound. The modern resurgence of country-pop has confounded this vision with elements found in a wide span of genres; this is not to say that these elements are not valid, just that they swoop in and begin shifting perspectives. "It's really funny to me because when I first came out, when I was really young, way back when, it was weird for me to do country music. Now, everyone's embracing it," Shamir says, humored by the imposition.

Shamir's new record, Be the Yee, Here Comes the Haw, is the antithesis of any suggestion of singularity. Despite being recorded minimally, the lyrics power past a four-track to paint a grand image of loss, love, defiance and acceptance. Strings are synthesized to hug and twang at the multi-talented artist's vocal chords, while percussive elements are paired-down to back echoes.

"I really wanted to make a minimal-maximal record."

The lines, "Your eyes say we don't have too long/ And we start to speak and you sit languidly," open up the first few chords of the album's second track, "Strong." This picture of longing is contrasted by the next movement of the piece, where these lines are repeated. Backing vocals enter to lift each note Shamir sings to some higher space, before the track ends in a gust of woah's and oh's, and a finale: "Yee haw!" For being only the second track on the record, "Strong," is unironically strong — and it's a vivid indication of the type of poeticism to come.

"I guess there's two parts to the record," Shamir explains. "The first part is that I really wanted to make a minimal-maximal record. Each instrumental track is no more than four tracks and so I just really wanted to see how much I could get out of very little. The second half of that is the whole resurgence in popularity within country music and kind of join that, and loving that as a lover of country."

Talk of jeans, humanism, and hollowed-yet-full chords follow on the next track, "Ultra," perhaps the most anthemic of Be the Yee, Here Comes the Haw. Each verse escalates the romanticism of the melodics, upping the stakes of the winding story with each riff. "I can't help that I'm dissociating!" Shamir belts out, nearly clipping a register that would seem to contain a song of its structure and genre. "Synchronize in real time," each syllable hits beautifully in the next verse, reflecting the aftermath of a chorus grand in both emotion and instrumentation.

Despite feeling so large, so elevating, "Ultra" is a highlight of the record because of its instrumental ease. "Just the guitar in 'Ultra,' that song, like I said as far as the track composition, is just three tracks. All those sounds that you hear are just from my guitar," Shamir says of the ballad.

It's hard to find the words to describe most songs on the album. Some harmonies, like those of the most classic country and folk records, are indescribable. The melodies soothe and sing their own praises, striking a balance between highs and lows, pairing oppositely at times to the lyrics. Shamir has created a level of intimacy beyond analysis.

In addition to the record itself, I was curious about the process behind-the-scenes. A triumphant proclamation followed the April 19 drop of the new record in the form of a tweet from Shamir.

Curious about the relation between creative output and community input, I wondered about the tweet and what starting a label was really like. "Well, I think it's only natural, right? I think for me, creating is such second nature that I don't get tired and fatigued. The more I create, the more I just want to create more and get inspired all over again. I think me working with all my artists on my label has only inspired me to create, myself, for my own stuff," Shamir states plainly. "I think that's how art should be, and I think that's how inspiration should be."

This approach to plurality, despite the intimacy of Be the Yee, Here Comes the Haw, is certainly what allows Shamir to fly above and beyond on any individual sound. By viewing creating as a symbiotic process, genres are symbiotic, instrumentation and vocals are unopposed, and lyricism and theming go hand-in-hand, all in one collection of stories.