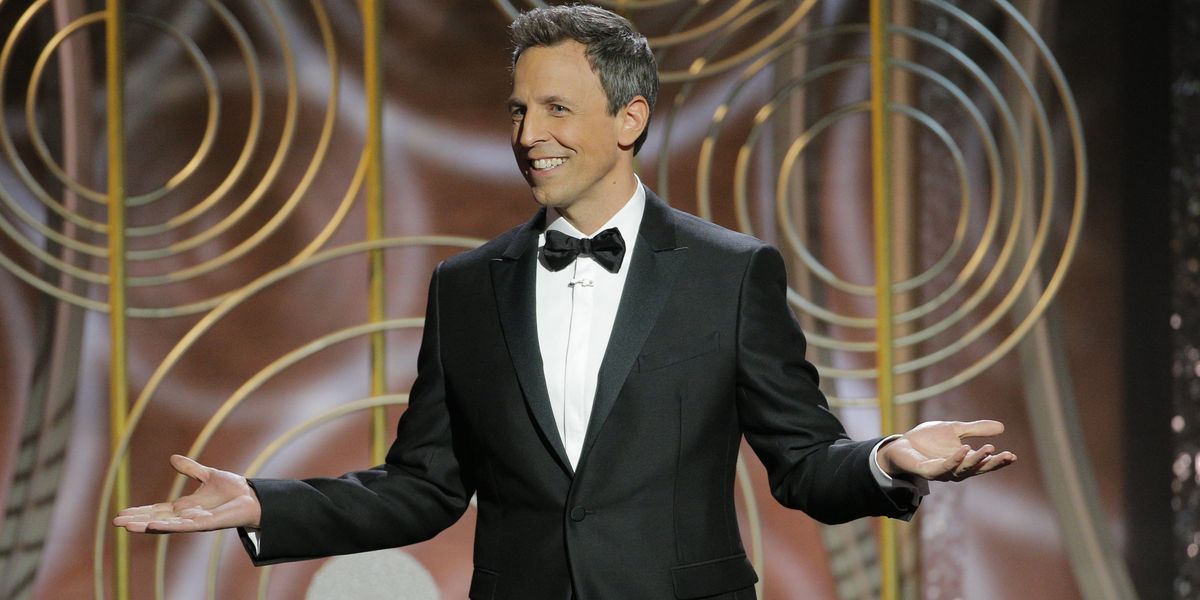 At the 2018 Golden Globes awards ceremony on Sunday, Seth Meyers was given the unenviable task of hosting the first major Hollywood event since the #MeToo movement bust the lid off decades of silence over sexual assault and abuse within the industry. The veteran comedian was, overall, cool as a cucumber, addressing the "elephant not in the room," aka Harvey Weinstein, right off the bat and making what seemed a sincere gesture toward all women and especially those who have spoken out against harassment.

"Well, I think it's time to address the elephant not in the room. Harvey Weinstein isn't here tonight because, well, I've heard rumors that he's crazy and difficult to work with," Meyers began. "But don't worry, because he'll be back in 20 years when he'll be the first person booed during the In Memoriam." The audience lightly booed, to which Meyers responded, "It will sound like that."

He also took a dig at Kevin Spacey, saying, "I was happy to hear they're going to do another season of House of Cards," he said. "Is Christopher Plummer available for that, too? I hope he can do a Southern accent because Kevin Spacey sure couldn't." When the audience, mostly dressed in black, gasped again, he quipped, "Oh, is that too mean? To Kevin Spacey?"


On criticism that the show should've been hosted by a woman, Meyers joked, "They tried to get a woman to host the show. They really did.They said, 'How'd you like to come and be judged by some of the most most powerful people in Hollywood?' And women were, like 'Hmmm. Well, where is it?' And they said, 'this hotel.' And, long story short: I'm your host tonight." (Though that self-effacing joke still didn't explain why a woman wasn't in fact chosen).

Meyers mostly stuck to his promise that he would stay away from Donald Trump jokes, except when he noted that the only string of words that could piss off Trump more than 'Hollywood Foreign Press Association' would be the 'Hillary Mexico Salad Association.'" The man does love a good cheeseburger.

The late night host ended on a serious note, telling viewers at home that though he knows the Globes looks like a room full of privileged, out-of-touch elites, everyone there appreciates how hard everyone on set works (and not just the big stars). Not everyone in Hollywood is there thanks to their rich dad, Meyers explained. "Except for that one PA. Every film set has at least one super-connected PA: 'Oh, that's Jeremy Paramount!'"

In the end, reactions to the speech were mixed, though many ended up praising Meyers for doing a "good job, considering." However, he spent so much of his speech addressing bad white dudes that it left little room to center the women and men who sacrificed their personal and professional well-being to expose those men in the first place. Meyers felt like a placating entry point for viewers into a painful discussion that needs to keep happening, and yet women, and particularly women of color (hello, Oprah!) were tasked again and again with forcing the conversation. When will a white man's 'good enough' finally be replaced with excellence by anyone else? Not this year, at least.

Watch the full speech below: