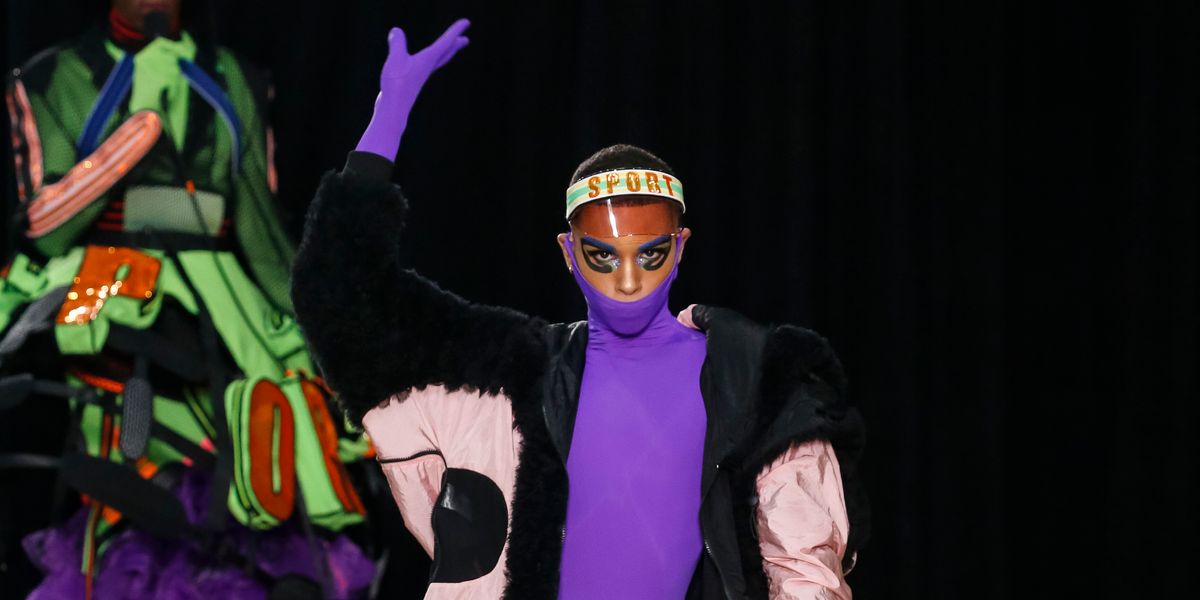 Laurence & Chico, the Canadian based womenswear and accessories brand with a distinctively queer sensibility and a high-street-meets-couture point of view, debuted their new spring collection last night for NYFW.

The collection was a sports-themed fantasy ride, complete with larger than life headpieces and wigs, and multi-tiered dresses, exaggerated silhouettes, and as always, a bold wash of vibrant color. Inspired by ballroom culture, the design duo tapped runway coach and style legend Miss J. Alexander to emcee the show, and opened it in a stunning masked look alongside professional performance artists and friends.

PAPER caught up with one of the performers, rising New York-based drag star, model, and artist Serena Tea, who has previously done background work on Ryan Murphy's hit series Pose, to spill the tea (pun intended) on what it was like to walk the ball for his very first runway show. Read on to see some of the eye-popping looks and catch the action, below.

How did you get involved?

Laurence & Chico casted me for the show and wanted a vogue performance, but they told me the people who came before me didn't seem to know what they were doing. So once I was casted, I sent them five dancers [including Chauncey Dominique and Donte "DD" Smith] I performed with; three of my picks were chosen. But what none of us knew was that we were going to open the show with our performance. When they told me, I was shook, really nervous, but Miss J. [Alexander] gave me a pep talk...

Shut up! What did she tell you?

She was like, "They picked you for a reason, you look sickening. I see you performing all the time, so just go off."

As far as the performance itself, how did you arrange it?

After the casting, they asked if I knew other performers who were voguers or models, and so I sent them several of my friends' profiles. They all showed up at the casting and got in, and none of it was really rehearsed. It was very loose, they told us we could do whatever we wanted. They were people we met on the set of Pose. Chauncey and Dante, we met there. Chauncey does some great stuff with VFILES, and Dante is an amazing upcoming model who walked for Chromat last year.

It was so busy. It was hard to move around because the outfits were so big, but just lots of big hair, lots of color.

I'm gagging. What does it feel like to have these major co-signs? This is your first runway show, you did background work on Pose, and you're performing all the time, and getting the thumbs up from Miss. J and in your community of drag and performance.

It feels great, but it's honestly not about me, but I've always been focused on representation. If there is an opportunity and I'm not able to be involved in it but I can give it to someone else, it's going to them. There's so much talent in New York, and they're not always the face, it's not always white people, and it's definitely not boring. There's so much talent: there's rhythm; there's looks; there's beautiful skin, and it needs to be seen, so to be front-facing on these amazing projects is really a privilege. I always look at it as a privilege.