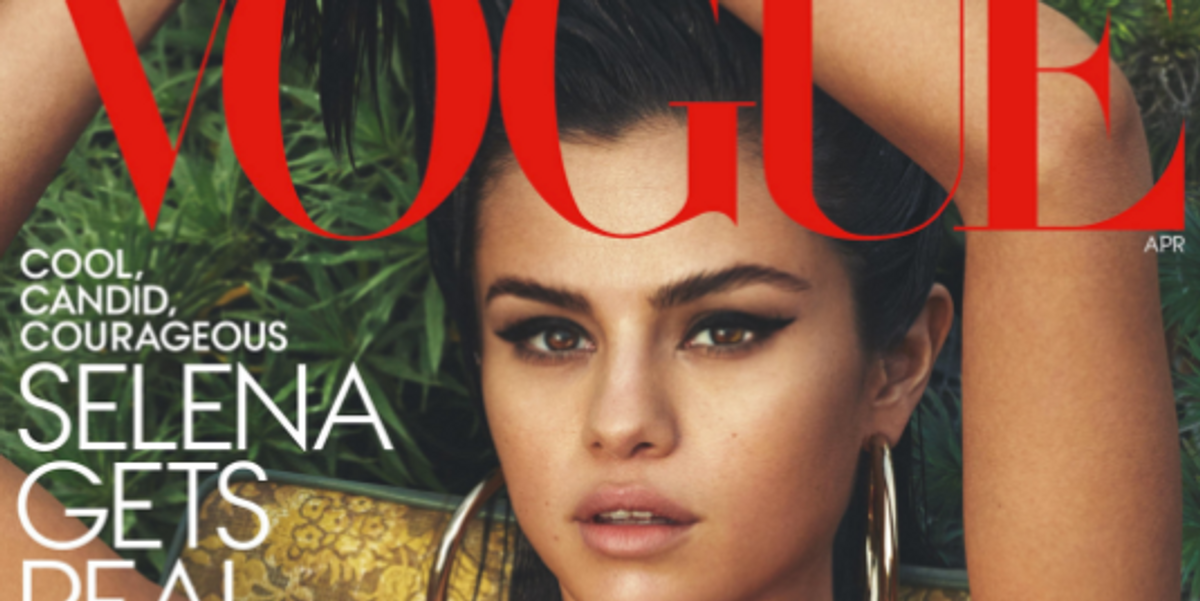 Vogue are back again with another soul-baring celebrity feature, this time probing pop idol Selena Gomez as she reveals the mental health issues that have plagued her for the last several years.

Despite the mild obsequiousness we have come to expect from male journalists profiling starlets (read: As I slip an apron over her mane of chocolate-brown hair, for which Pantene has paid her millions, and tie it around her tiny waist...), writer Rob Haskell does seem to almost get to the crux of Selena. Not only is she, like us all, constantly trying to overcome feelings of inadequacy, but she has also worked out that social media is pretty fucking toxic. In fact she doesn't even run or have the password to her Instagram, which is the most followed account on Instagram.

"As soon as I became the most followed person on Instagram, I sort of freaked out," she said. "It had become so consuming to me. It's what I woke up to and went to sleep to. I was an addict, and it felt like I was seeing things I didn't want to see, like it was putting things in my head that I didn't want to care about. I always end up feeling like shit when I look at Instagram. Which is why I'm kind of under the radar, ghosting it a bit."

This, coupled with a rigorous travel schedule, led to Selena canceling her schedule and submitting herself to a rehab facility for three months. The singer adds that has her fan base grew up and generally became more cognizant/critical, she also began to feel like more a fraud.

"Tours are a really lonely place for me," Selena explains. "My self-esteem was shot. I was depressed, anxious. I started to have panic attacks right before getting onstage, or right after leaving the stage. Basically I felt I wasn't good enough, wasn't capable. I felt I wasn't giving my fans anything, and they could see it—which, I think, was a complete distortion. I was so used to performing for kids."

#SelenaGomez looks STUNNING in her very first @voguemagazine cover shoot. 🔥 Tap the link in bio for more. 👀📸: @mertalas + @marcuspiggot
A post shared by Teen Vogue (@teenvogue) on Mar 16, 2017 at 7:54am PDT

"At concerts I used to make the entire crowd raise up their pinkies and make a pinky promise never to allow anybody to make them feel that they weren't good enough," she continues. "Suddenly I have kids smoking and drinking at my shows, people in their 20s, 30s, and I'm looking into their eyes, and I don't know what to say...What I wanted to say is that life is so stressful, and I get the desire to just escape it. But I wasn't figuring my own stuff out, so I felt I had no wisdom to share. And so maybe I thought everybody out there was thinking, This is a waste of time."

@SelenaGomez wears the #CoachSpring2017 Customized Jacket With Buckle and Rose Print Shorts in @VogueMagazine April 2017. Photographed by @MertAlas and @MacPiggott and styled by Camilla Nickerson.
A post shared by Coach (@coach) on Mar 16, 2017 at 7:17am PDT

Selena also alludes to ex-boyfriend of three years, Justin Bieber, throughout the piece. She won't say his name, but Haskell encourages us to read between the lines.

"Somebody I used to hang out with would always get very frustrated with me," she says, speaking as to why she always stops to take photos with young fans. "But I have a hard time saying no to children."

When asked about her current relationship with The Weeknd, Selena says talking about boyfriends publicly has always backfired for her in the past and she will "never do it again."

There you have it folks. Selena Gomez, in all her chocolate-mane glory.