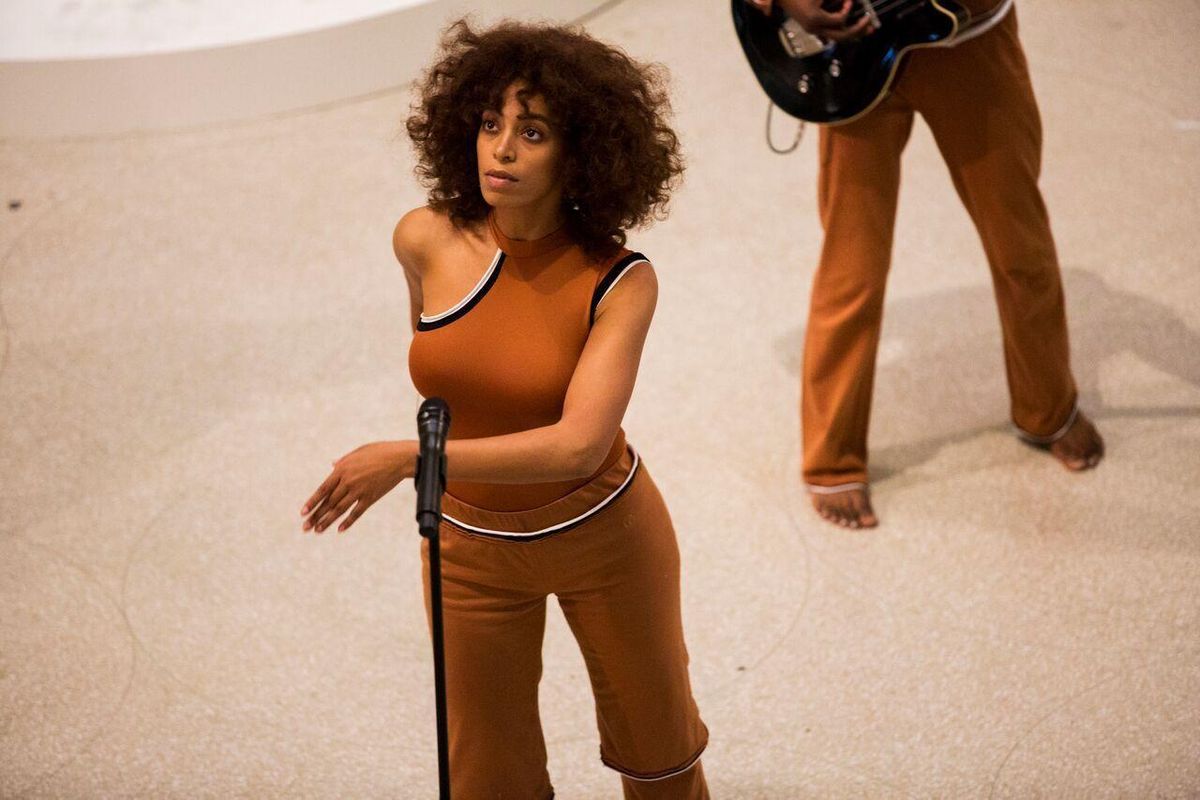 On May 18th, the Solomon R. Guggenheim Museum in New York City partnered with the Red Bull Music Academy Fesitval to host An Ode To, Solange Knowles' "interdisciplinary performance piece and meditation examining themes from A Seat At The Table through movement, installation, and experimentation with reconstructed musical arrangements."

Attendees, (all dressed in white, as requested by the artist), were seated on the floor, with media members and friends of Solange (including Janelle Monae, Bjork, Questlove, Zoe Kravitz, DeRay McKesson and Kelela) standing along the Guggenheim's spiraling walkways, peering over the edges down at the scene below.

Marching in a line with dozens of black performers all dressed in white, Solange and her band entered, barefooted and outfitted in earth tones, silent and stone-faced. The Frank Lloyd Wright-designed space - bright, airy, and intimate - lent itself to a performance that felt the same.

Solange serenaded the rapt crowd gathered in the gallery with a medley of songs from Seat, effortlessly hitting soaring, glass-shattering high notes and moving the audience with choreography inspired by West African dance, yoga, and the unique artistic sensibility that only Solange could imbue her moves with.

During "F.U.B.U." (For Us By Us), the singer approached various black members of the audience, singing both to and with them to their obvious delight, and danced with a black security guard posted up along the wall before twerking joyously later on to raucous cheers. Flanked always by two dancers and accompanied by her band on percussions and horns, Solange performed six songs off the album, reaching one of several apexes during the show when she and her crew shrieked at the tops of their lungs while performing fan-favorite "Mad." The experience overall was akin to attending church, with Solange directing the crowd to stand during "Rise" as a pastor or a reverend would. More cathartic than purely entertaining, the show was an act of disruption and a call to order from an artist who has always defied convention. A white arts writer remarked to his friend that amazing as the show was, "Maybe it wasn't really made for me." Something had finally clicked.

At the end of the show, the artist came out alone, thanking the crowd and expressing her ambivalence toward the history behind the space. "I've never cared much about institutions," she said to applause, before declaring she had been planning all along to not only perform in the historically (and literally) white space but to "[tear] down the fucking walls."

By the end of the show, even the jaded journalists had tears in their eyes, and concertgoers filed out onto 5th Avenue next to Central Park, serene and lifted in the fading evening light and heavy humid air.

See photos from the event below: