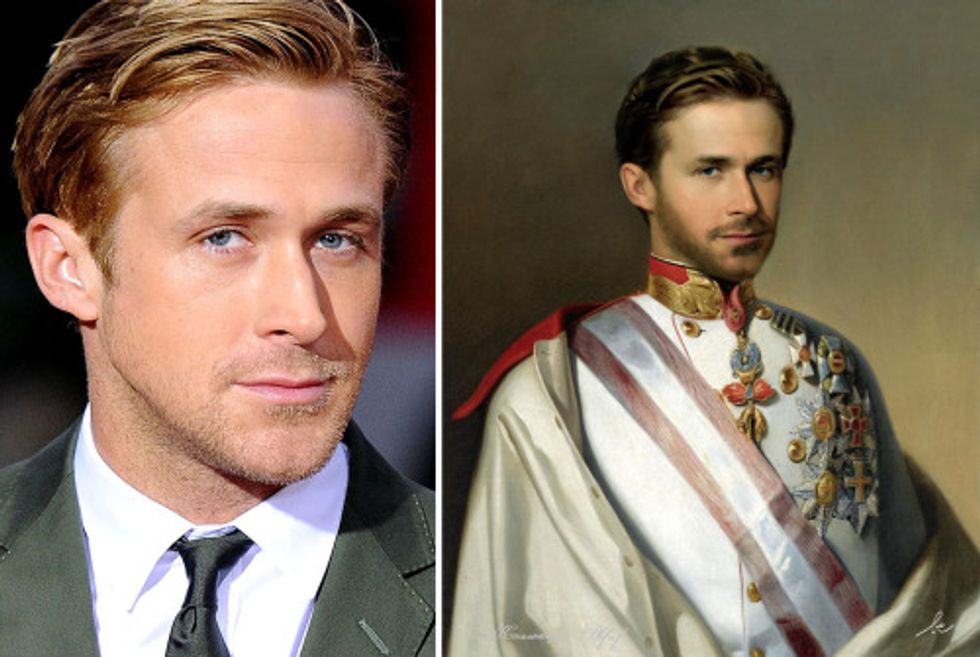 by Abby Schreiber
PAPERMAG
Ryan Gosling in a portrait of Emperor Franz Joseph I by an unknown artist
Taking a page from Kehinde Wiley, the web has been obsessed lately with mashing up modern celebs and historical paintings. Previously, we introduced you to a Tumblr that points out the *eerie* similarities between contemporary rappers and classical art subjects along with a project that inserts magazine covers into the same sorts of historical artworks. Today we found a French artist whose work riffs on a similar theme, replacing the figures in art masterpieces with the faces of celebrities. Voyages dans les temps is the brainchild of Rennes-based graphic artist BÃ©nÃ©dicte Lacroix and includes stars like Miley, Ryan Gosling, Jack Nicholson, Madonna, BeyoncÃ© and more transformed into military heroes, Dutch maidens or in Leonardo DiCaprio's case, Vincent Van Gogh himself. We hear that Lacroix works as a retoucher and it shows -- her precision when it comes to inserting Miley's scowl into a Henri-Guillaume Schlesinger painting or Madonna's gaze into a piece by Vittorio Corcos is impressive. Take a look at some of our favorites and head to Lacroix's Tumblr to see the rest.


Miley Cyrus in A Spanish Beauty by Henri-Guillaume Schlesinger