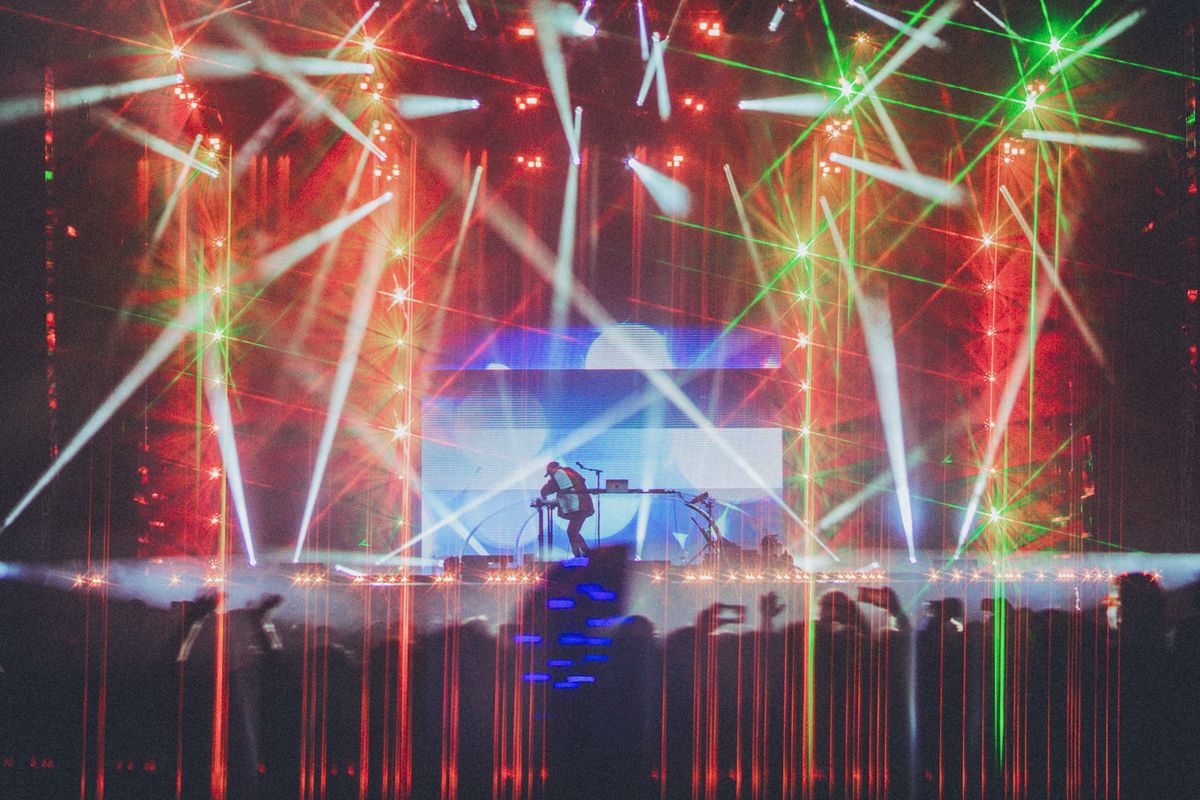 Porter Robinson Invites Us Into His World

"I want to be surrounded when I'm on stage by acts that I really love and respect," North Carolina-born electronic producer Porter Robinson, explains to me in his trailer. We're backstage at his new festival, Second Sky, created to provide music lovers a new space to catch a specially curated, yet diverse group of acts that fit into the electronic mold. "You don't get to choose who you are associated with now, especially with how much of your associations have become algorithm driven." His frustration is understandable, as a quick perusal of Spotify's recommended artists will turn up what essentially amounts to a "best of" list for popular EDM acts such as Dillon Francis, Nero, and Knife Party, which at one point may have accurately represented his dubstep-influenced electro beginnings but now feels horribly out of touch with the more melodic indie-electronica direction he's taken his work since.

Out of this sonic dissonance, Second Sky was born. A new festival personally curated by Robinson, it features a lineup that exclusively consists of his favorite artists all performing on one stage. Put on with the help of the logistical minds behind Coachella, Goldenvoice, the boutique festival took over the Oakland shoreline for a sold out weekend that promised an immersive experience inspired by the rich visual world Robinson had crafted behind his music.

As we chat the night before the festival opens its doors, it's clear that Robinson has a lot on his mind. He's headlined plenty of festivals before, but this will be the first time he's putting one on. On top of all of the new practical things he needs to now worry about, like food, security and production, he also has to figure out how to convince his fans who may have discovered him through more mainstream EDM channels to be open to smaller acts outside of that genre. "I want to see artists who I love, succeed. I want them to have a platform," Robinson emphasizes.

"Anamanaguchi are an example of an act that if I had to create my own related artists on Spotify, I would put them right at the top," Robinson says. "I wanted to take back a bit of control in that sense too and help out artists who I think are most deserving."

Related | Meesh Wants To Be 'More Than Friends'

Robinson is candid about his struggles with his perfectionism, "I think especially after my album, Worlds, I took a step back. I wanted to be, in a certain way, inaccessible to folks because I'm was so concerned with control that I didn't really want to make myself that available." He goes on to talk about retreating from social media and feeling like he wasn't delivering on what his fans wanted from him, saying, "I think I eventually came to find that approach really debilitating."

Things began to change in 2017. Robinson debuted a new project, Virtual Self, that tapped into a more rave-inspired sound folding in elements of speedcore, happy hardcore, garage, and any other genre one might find on a vintage DDR soundtrack. It was an artistic indulgence that paid off; Robinson was rewarded with his first-ever Grammy nomination for the song "Ghost Voices" off the EP and fans were happy to just see him back in action. Like Worlds, Virtual Self was a project heavily grounded in aesthetics with fully fleshed out characters and Matrix-like visuals, providing a rich alternate reality for the music to inhabit. Second Sky was no exception. In fact, it was the perfect chance for Robinson to bring Worlds to life.

"We've always had this [idea] kicking around in the back of our minds, of creating Porterland," he says of the festival. "There are so many different characters in my music videos and in my show visuals. I always thought it'd be cool to create a physical space that paid homage to some of those things." The moment you entered the festival grounds, attendees were treated to an immersive canopy of hanging purple and white flowers being spit out in front of giant cloud-covered letters spelling out "Second Sky" underneath the San Francisco skyline.

Elsewhere festival-goers were invited to write a postcard to themselves from the festival that could either be delivered immediately after the festival ended or a year later. It was a small touch that you might've missed it you weren't brave enough to make it past the massive merch lines, but was there nonetheless. The day actually started out with a 30-minute set from Robinson as Virtual Self, a choice intentionally made to ensure more people made it out early and would then stick around to watch the bands they might not have been already familiar with.

Related | Perfume Is the Global Future of J-Pop

The star of first day was easily Japanese synth-pop darling, Wednesday Campanella. Perhaps the least known act on the lineup, there was something immediately captivating about the group's charismatic frontwoman KOM_I. Falling in and out of a giant silk curtain suspended behind her, the moment that made everyone's jaw drop and fish out their phones from their pockets was when KOM_I descended into the audience with a giant inflated silk ball in tow before letting the wind carry it away over Oakland. Everyone watched on in awe as KOM_I then climbed atop a ladder in the middle of the audience to deliver her closing number, as festival organizers ran around panicked about the runaway ball.

"I don't want to sound egotistical but G Jones is very open about the fact that his live shows are directly inspired by Worlds and the live shows that I've put together," Robinson says. "I think that American electronic music gets such a hard rep sometimes — sometimes rightly. But part of the legacy of electronic music is really aesthetically controlled, tightly put together, beautiful live shows, like what G Jones has done. If I have some part in that, that makes me feel really proud."

It was not uncommon to run into the other performers on the lineup catching another act's set. Sarah Bonito of Kero Kero Bonito popped out for a quick cameo in Anamanguchi's "Miku," Nina Las Vegas could be seen popping into Cashmere Cat's trailer backstage, and practically everyone with an artist wristband piled into the sound booth to watch Robinson close out each night. (Many of the band's parents even made it out for the fest.) Throughout the weekend, you could often find members of the Robinson family stationed outside of the booth for the Robinson Malawi Fund, a charity founded by Porter after his brother, Mark's, battle with Burkitt lymphoma. (By the end of the weekend they had raised $77,000 which Porter and Goldenvoice then matched to bring the total up to a staggering $154,000.) The crowd was an even mix of EDM bros and people that looked like they just walked out of an anime convention. I remember at one point looking to my left to see a person performing light-up glove tricks and then looking to my right to find a game of Magic: The Gathering being played at my feet.

The second day of the festival was clearly leading to the big reveal of who the "Special Guest" was. When the time came you could feel the anticipation build as the festival mascot, Potaro, a blue winged ball-like creature based off of the Worlds album art, waddled on stage only to reveal that it was none other than Skrillex inside. The sound that erupted from the crowd was positively seismic.

As the weekend draws to a close there hangs a palpable magic in the air. Madeon joined Robinson on stage to sing one last time their collaborative single, "Shelter," but it almost doesn't even matter if the mic is on, since the crowd already is singing along to every word. The feeling that something much bigger has been at work the whole weekend finally reaches a tipping point. As all of the artists gathered backstage for an impromptu after party, each taking turns on the decks to play songs they might otherwise not get the chance to play out, there was an air of giddy euphoria.

As everyone went their separate ways at the end of the night, hungover and exhausted from two days baking under the Bay Area sun, I remembered what Robinson ultimately said about what he wanted to accomplish with Second Sky. "If you have the ability to make something good and it's meaningful to you and it helps other people then that's worthwhile. I'm just trying to do that to the greatest extent that I can."