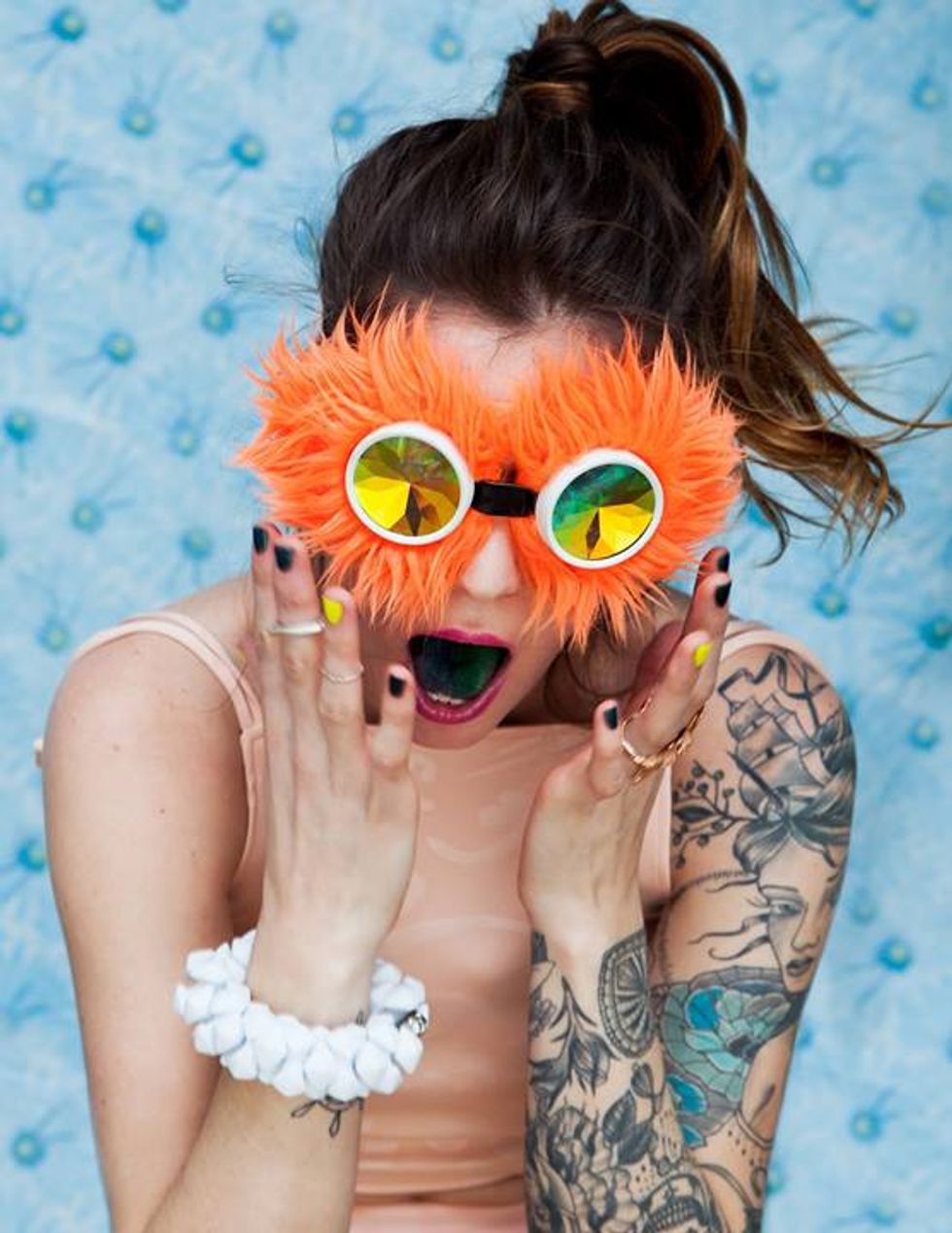 There's a lot to envy about Seasick Mama (a.k.a Marial Maher), the buzzy, Brooklyn-based indie pop singer who balances her music with a budding modeling career. But any jealousy quickly dissipates when you realize she's pretty damn good at both. The singer worked with producers David Sitek (TV on the Radio), Sam Farrar (Phantom Planet), and Peter Wade (MNDR), on her recent EP, Tip Top Shape, out now, and nabbed campaigns for NYC makeup line Ardency Inn and denim brand Cult of Individuality. We chatted with Marial about where she got the name, her new video "Gimme Something More To Work With" (which we're psyched to exclusively premiere, below), and artist communes in Germany. Read on.

When did you start playing music?

My dad has always been very musical and always used music as some sort of therapy for his children. The earliest [music] memory I have is of my dad using his guitar and his sense of humor to calm us down or keep us distracted or entertain us. But the earliest memory that I have of being like "Wow, I really want to learn how to play the guitar or sing" was after I graduated college. I was so confused.

What inspires your music?

I have a very creative family -- well, a really bizarre family. My sister lived in New York for a while and then moved to Germany and started this huge, weird artist commune. It's in the middle of nowhere outside of Berlin. It's like these huge pig farms that she turned into really cool, trendy lofts and artists just come from all around the world and collaborate on music. It's mostly dance and performance art and video -- all this weird, bizarre shit.  When I saw my sister being able to make a living creatively I was like, "I need to do that, too."

Where did the name Seasick Mama come from?

In college, I broke up with my boyfriend and he wrote me this really beautiful song. One of the lines in it was "you're nothing but a seasick mama." That just resonated with me. I looked it up and I found that it was a lyric to a Neil Young song called "For the Turnstiles." The way I [think of it] is that it's about a sailor's wife, someone who is loyal to her husband, even though they are away for a very long time. Like a very loyal, strong woman. I really liked that imagery a lot so I kept it because I kind of want to be that person. I want to be loyal and strong, even if I'm by myself. So I made it my artist name.

You've described your sound as "intellectual pop music." What does that mean?

Taylor Swift, Miley, Rihanna -- I feel like those women are all fronts for small old men who write music for them that become hits. But there are artists out there that are writing all their own stuff like Lorde, Little Dragon, Grimes. All those girls are super smart and are also trying to market themselves in the pop world. There are so many talented songwriters that I don't think get enough credibility. I had this conversation with someone and I was like "I feel like there should be a new genre called 'intellectual pop music.'" Fucking smart ass women writing all their own stuff with no help from anybody. I write all my own lyrics and melodies. I've had help from producers, but I just want people to know that all these words are coming from me. They're all honest.

What's "Gimme Something More To Work With" about?

Tell me about the video. Where did you shoot it?

We originally wanted to shoot inside a place called Grossinger's. It's this old, broken down former resort in upstate New York. We drove two and a half hours and realized that we couldn't get in. There was a huge sign that said, "Do not trespass. If you do, you'll go to jail." I was like "I don't want to go to jail!" The closest that we could get to that was to shoot in the director's basement. He was like "I have this basement. I've never been down there." It looked like someone was living down there. It was extremely terrifying. But it worked out for the better. We wanted this grungy setting, since the song's tone is very dark and I think we did a pretty good job for what we had.

Well, I keep bothering my label to release even more music. I've written probably 30 songs in the past year. I was just like, "Let's just keep releasing more music every single day." But that's not going to happen. In the summer I want to release another EP that will definitely have a summer vibe. I want to have a song of the summer. I feel like I have a few songs that definitely fit for, like, cocktail hour at the beach.