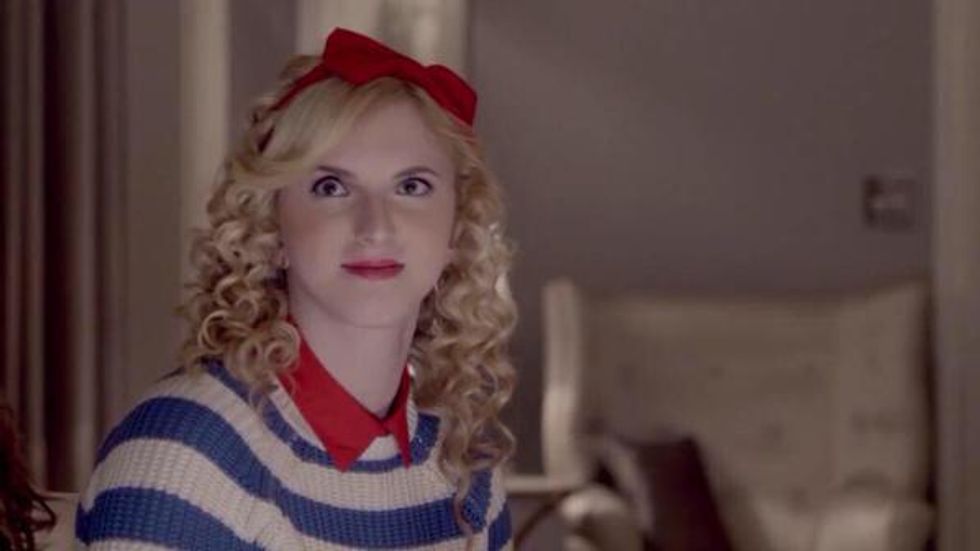 The pilot quickly introduced us to the members of the sorority Kappa Kappa Tau, a group of girls so vile-acting they deserve their own Bravo spin-off. This year, they're required to take any girl on campus who wishes to be a pledge, which means the seniors are stuck with a less-than-stellar bunch to carry on their legacy. Oh, did I mention that someone on campus in a Red Devil costume is going around mowing girl's heads off? Well, yeah, there is that too.

Although Whitney Meyer may not be a name you've seen before, get used to it. She plays Tiffany, a sweet freshman who is given the moniker "Deaf Taylor Swift" by Emma Roberts. Meyer began acting as a way to overcome bullying in her past and reinsert some confidence into her life. Through non-traditional casting she was plucked from obscurity and put on one of the most widely publicized new shows this fall season. Although she got her head mowed off early on in the season opener, Meyer is not a girl to forget.

She may only be 20, but already she understands the importance of diversity in Hollywood and how she's bringing visibility to the deaf community with her role. I sat down with her over FaceTime to discuss her feminist icons and what it was like getting her face mowed while being buried up to her neck.

Tell me how you got started with acting.
My mom took me to classes and workshops at a theater in Boston that we frequented when I was around 11 or 12 and I also had the opportunity to work with some really great acting coaches.. Later on I did more student/independent/short films and decided that's what I wanted to do because working on film sets are so much fun.

So Scream Queens was your first role?
Scream Queens was my first TV gig, and it was fun and campy and massively different from anything I've ever done, but I do want people to know that I want to be taken seriously as an actor, both on film and television. Being deaf can be tough sometimes when you're in the real world, but it isn't stopping me from reaching for the stars. Or the top shelf in my kitchen attempting to grab my favorite coffee mug.

When you first got the script was there any trepidation playing the character who is referred to as 'Deaf Taylor Swift?'
Well actually I knew I would be playing a deaf girl who loved Taylor Swift, but I didn't know that she would be called that. That was Chanel's character's whole thing.

Where you offended when you got to set and they started calling you that?
I wasn't, but when there was line where I was referred to as "hearing impaired" I told the writers that it should be "deaf," because I didn't want the deaf community to be offended and I care about their feelings. "Hearing impaired," isn't a term most deaf people like, or even use. "Impaired" often means broken or not normal, and that isn't the case.

Did Ryan Murphy ever explain to the cast his thoughts on taking aim at every minority group?
He didn't explain to me, but if you notice he is a big fan of non-traditional casting. He loves casting people with different body types, disabilities and skills. So he'll have deaf people, people in wheel chairs. From Glee to Nip Tuck he is out there and he's done all of it. He's very inclusive in his casting.

Do you think if a non-deaf actor was playing your character you would be offended?
I don't think I'd love it. it's hard to say, because you have Kevin McHale in Glee playing someone in a wheelchair even though he isn't in one in real life. He did a great job and is a great actor, but I feel like if someone was not deaf and trying to play deaf I wouldn't love it. The lead actress in the show Switched at Birth, Katie Leclerc isn't deaf, and sometimes that is hard for me to watch but, again, she's a great actor. I think it really varies from role to role.

Which shows inspired you to become an actress?
I was about 12 when I started acting. I started because I wanted to work past some of my self-esteem issues. But you know what? I was a big fan of Mary Kate and Ashley shows growing up! I loved Hilary Duff and Lizzie McGuire. Basically anything Disney and early 2000s: That's So Raven, Phil of the Future, all those shows really helped me learn about social relationships and how people interact with each other.

Would you say you were a misfit growing up?
You know, growing up I was very shy and I still am shy at times. I think most people are not completely outgoing. When I was younger I was a misfit because I was bullied for being deaf. You look back on that and it sucked, but you have to learn from what you've experienced and grow from. You shouldn't let it affect who you are as a person in a negative way.

Did bullying change your life in a positive way?
It made me a lot more aware of right and wrong. It opened my eyes to how you should treat people and really aware of people's feelings. It hurts me to see people hurting on the outside and inside. If anything it made me want to make others happy more.

Was it difficult being bullied growing up then coming to set and playing a character who is essentially bullied?
I didn't think a lot about my own bullying why playing Tiffany aka Deaf Taylor Swift. My character was very sweet and naive but didn't really understand what was going on. She didn't understand that Chanel was being a little bitch of a bitch to her. It was easy though because everyone on set treated me with such kindness and respect. There was an interpreter on set for me and no one treated me any differently. The entire cast and crew was so incredible sweet it made it really easy.
What was it like getting your head mowed off -- can you describe how shooting that scene worked?

Oh man, that scene was long. It was a night shoot and they had us in barrels in the ground that we would sit in and they would cover our necks with dirt. It was awesome but it really felt like we were buried at times because of all the bugs that would be crawling through our hair.

Who were you closest to on set?
Well everyone was super nice but I would say Abigail Breslin. Together we grabbed lunch with our moms and shared a lot of coffee moments.

Would you consider Scream Queens a feminist show?
I wouldn't call it a feminist show necessarily, but the characters definitely know who they are and who they want to be. You have characters like Zayday who is all about girl power. Everyone has their own identity and is really stepping up and realizing it. Last week they had a very feminist scene this season where they beat up frat boys for sexualizing them. For me that was a key moment showing these girls are getting in tune with their inner strut. 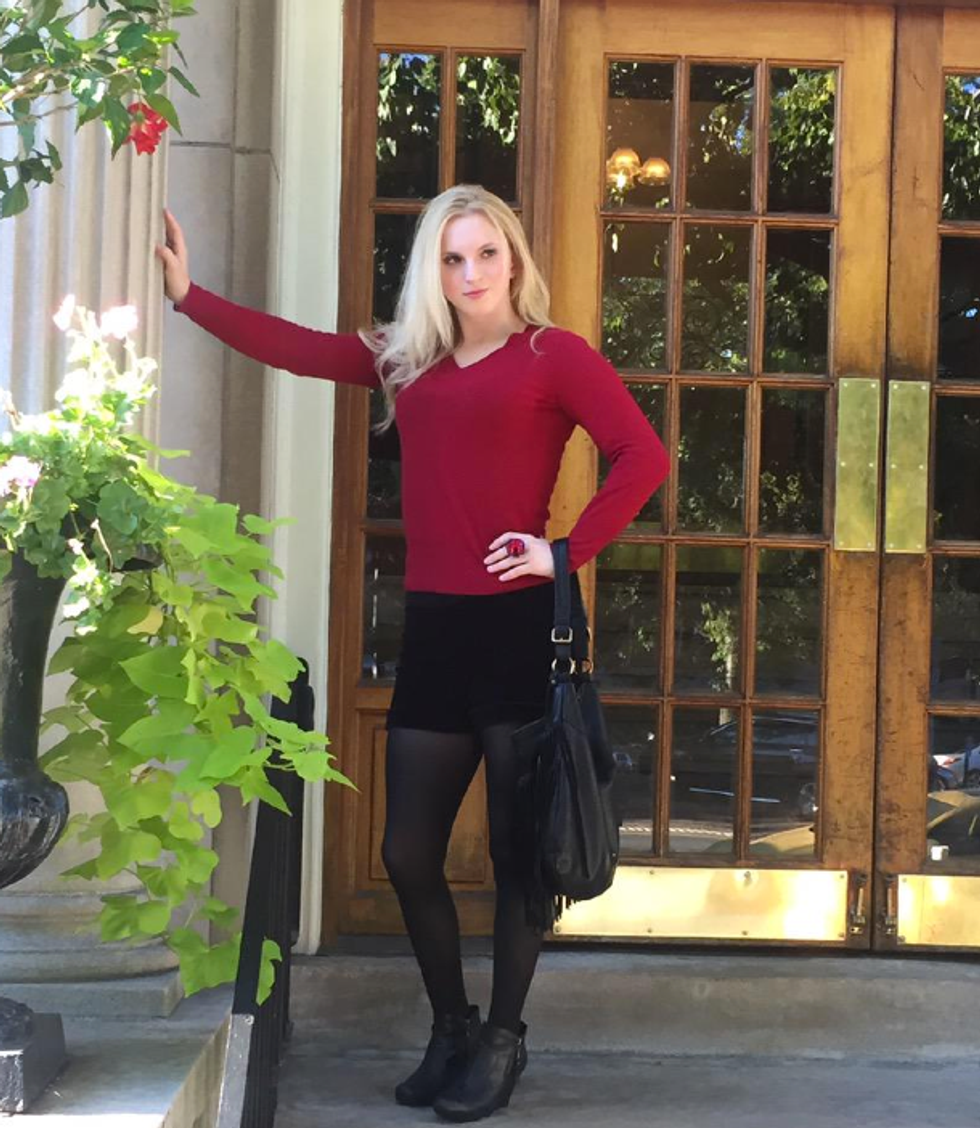 Do you have an inner-strut?
Today I do! I think when I have four shots of espresso I channel my inner strut.

Has Taylor Swift reached out to you since?
No, but that would be incredible! I know Ryan Murphy has made a few homages to her in the show but she's also been on tour.

Who do you think is the red devil?
I think it's possible right now it's the Dean, but I don't know for sure. The dean was there and so was Gigi so I think we have a lot to see between them about what happened all the way back in 1995.

Would you consider Hollywood a place where deaf actresses like yourself are given a shot?
I really wish there were more roles out there because too often casting directors will look at my picture and resume and like what they see but once they find out I'm deaf, "I don't fit the role." I hate using the term discrimination, but if people can think of other actors who have non-visible disabilities (and physical too), as inspirational... I think deaf actors should also be in the mix more. Hollywood would be even more eclectic and fun if it were one big melting pot of non-traditional casting.... Also it would be nice if you didn't have to have a size zero waist. But until that happens, I just have to prove that I'm worth the shot!!