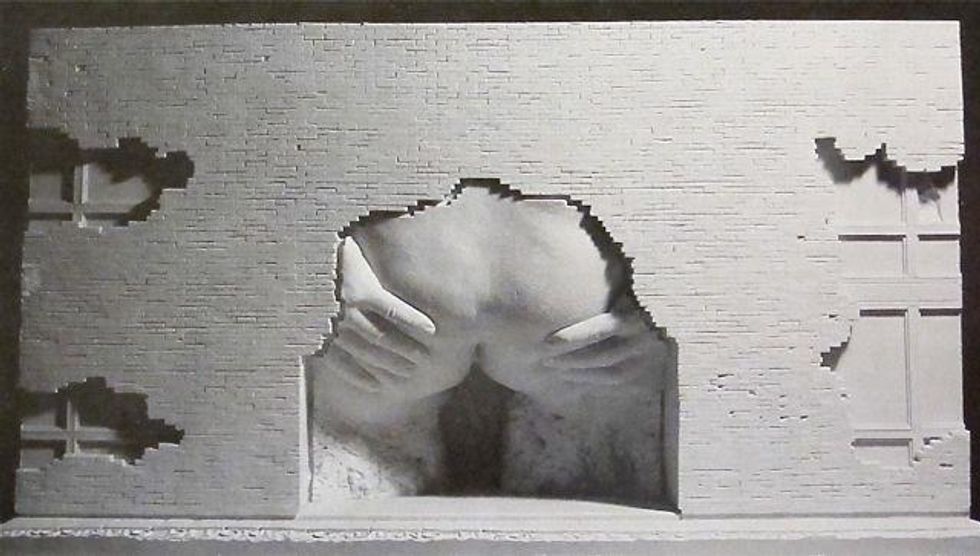 by Kate Messinger
PAPERMAG
A sneak peek at Anthea Hamilton's new sculpture
Kim K might have broken the Internet with her unapologetic display of derriÃ¨re, but Anthea Hamilton's new super-sized sculpture of a man's hindquarters, on view starting this Saturday at SculptureCenter (44-19 Purves St., Long Island City, Queens), is actually breaking walls. From the dabbled details of the life-like flesh to the highly accurate indentations of the large hands gripping cheeks, the 18-foot-tall ass is modeled after a 3D scan of a real man, carved from a large piece of foam and then painted to resemble a big behind breaking through a faux brick wall. Hamilton was inspired by a model that Italian designer Gaetano Pesce made in 1972 as a proposal for an entryway to a Manhattan skyscraper where patrons would pass through a naked mans open legs. Pesce's project, unsurprisingly, never came to fruition, but Hamilton's version brings this experimentation of size, space and obscenity into a new context and a new era.

"Whenever I have conversations with people I might work with, I show them this image," Hamilton says referring to the image of Pesce's original butt door model. "If you can understand this image, we can work together. [The model] was a proposal, but it also represents a proposal for how to react, and how I want the audience to react to the show as a whole."

Gaetano Pesce's original model from 1972
Theatrical in construction, the sculpture is  a perfect backdrop for Instagram selfies that will likely live on longer than the piece itself, but it's also a gateway to the rest of the show, Lichen! Libido! Chastity!, which is the artist's first U.S. solo show and one that draws from '70s pop culture, fashion and cultural appropriation. Printed textiles, unwearable disco-inspired platforms, PVC pipes made to look like giant cigarettes -- the butt is just the beginning.

We got the privilege of visiting the big booty while it was still in production, before it opens to the public this Saturday night. Get a sneak peak of the next butt everyone will be talking about but make sure you get to see the beauty in its full, rightful form in person.

A technician puts a finishing touch on the butt
Anthea Hamilton: Lichen! Libido! Chastity! will be on view at SculptureCenter in Long Island City September 20- January 4, 2016.
You May Also Like
Famous People