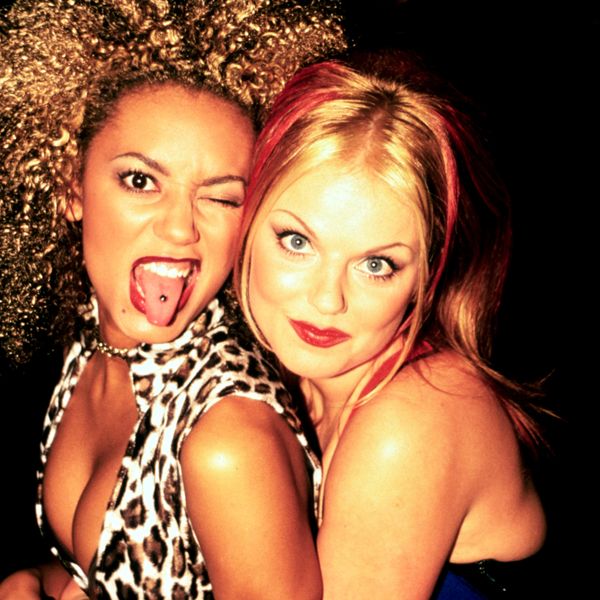 Were Scary Spice and Ginger Spice a Thing?

For the longest time, one of the rumors circulating the Spice World was that Mel B (Scary Spice) and Geri Halliwell-Horner (Ginger Spice) had a fling. And on Sunday, Mel B decided to settle things once and for all: it happened.

Mail on Sunday posted the transcript of the interview with Piers Morgan, who is a columnist for the paper. He asked Mel B, "Did you or didn't you with Geri Halliwell... did you sleep with her?" The singer replied, "Yeah, we all slept in a bed together but not 'like that' — all of us."

But that answer didn't satisfy Morgan, so he pressed on and asked, "Did you sleep with Geri 'like that'?" And according to the transcript, Scary Spice nodded and smiled. "She's going to hate me for this because she's all posh in her country house and her husband. But it's a fact. It just happened and we just giggled at it and that was it."

"It was just that once," she continued. "And hopefully when Geri gets asked that, which hopefully she will after this, she won't deny it. Because it was just a fun thing." According to The Sun on Sunday, the alleged hookup happened sometime in the mid '90s after the Spice Girls moved into a shared house in Maidenhead, Berks.

Mel C (Sporty Spice) was also apparently in the audience when the interview took place. When Mel B gave her a look after claiming she and Geri had slept together, she said, "I don't know anything." To which Mel B said, "Oh, whatever, Mel." Sporty Spice continued, "This is all new to me."

Morgan then proceeded to ask if anything of the sort had happened between Mel B and C. "Well, when I got my tongue pierced we all kissed," Mel B replied. "But that was just a kiss because I wanted to know what it felt like. It was just a silly kiss. Nothing sexual like that."

According to reports, right after the interview — which was taped two months before they started their reunion tour — Mel B panicked, and called Geri to apologize. A source told The Sun that they didn't want to jeopardize anything, and that "there were real fears this would upset Geri's husband and cause serious issues." The source continued, "Since marrying Christian, Geri has worked hard to shake off her old playgirl image and sort of reinvent herself as this perfect Stepford Wife. Mel immediately rang Geri to try to repair the damage."

Ginger Spice hasn't confirmed or commented on Scary Spice's claims that the two became one.