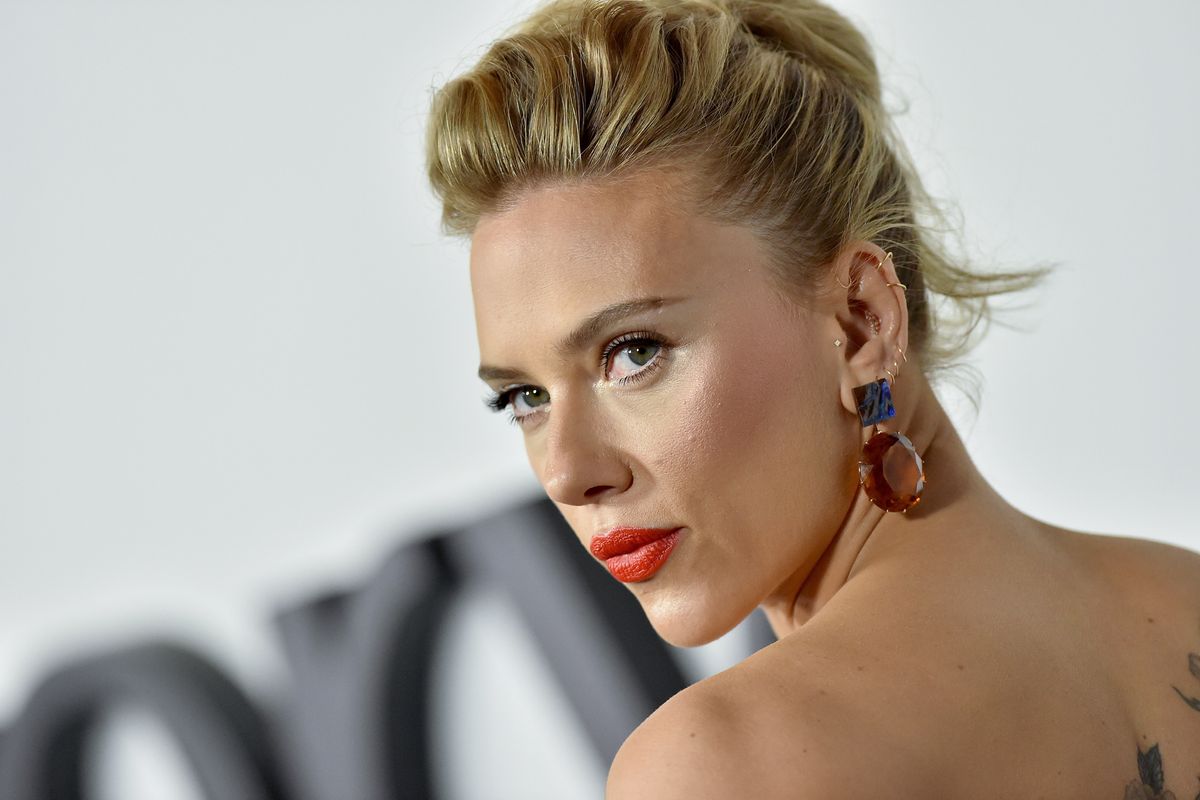 Fresh off Jojo Rabbit, Avengers: Endgame, and Marriage Story — films in which she appropriately played white cis women — Scarlett Johansson has addressed her latest casting controversy. In a new Vanity Fair cover story, the 35-year-old elaborated on accepting and then backing out the role of a trans man in the movie Rub & Tug.

Last summer, Johansson was cast as Dante "Tex" Gill, a trans man who helped run a Pittsburgh prostitution ring under the guise of a massage parlor. The actress had already become synonymous with tone-deaf casting after portraying a Japanese woman in A Ghost In The Shell, so it didn't take long for the backlash to mount. The loudest cries echoed those around the casting of Transparent and Dallas Buyers Club — saying the role should go to a trans actor. Others, like Them's Samantha Riedel, took further issue with how the filmmakers planned to (inaccurately) portray Gill not as a trans man, but as a butch lesbian who merely adopted a male identity to help her succeed in the mob world.

Related | Scarlett Johansson on Woody Allen: 'I Would Work With Him Anytime'

The new interview sees Johansson apologize for the ordeal wholesale. Not just for agreeing to the role, but for her initial response, which was to double down. Right after the announcement, her reps gave this remarkable direct quote to outlets like Bustle: "Tell them that they can be directed to Jeffrey Tambor, Jared Leto, and Felicity Huffman's reps for comment."

"In hindsight, I mishandled that situation," she tells Vanity Fair now. "I was not sensitive, my initial reaction to it. I wasn't totally aware of how the trans community felt about those three actors playing—and how they felt in general about cis actors playing—transgender people. I wasn't aware of that conversation—I was uneducated. So I learned a lot through that process. I misjudged that…. It was a hard time. It was like a whirlwind. I felt terribly about it. To feel like you're kind of tone-deaf to something is not a good feeling."

Related | Scarlett Johansson: My Quote Was Edited For 'Clickbait'

This is a new approach to controversy for Johansson. After she was challenged for telling As If magazine that, she should be "allowed to play any person, or any tree, or any animal," her reps came back saying her quote was taken out of context.

Meanwhile, Johansson was very clear that she hadn't been misquoted when when she said that she considers Woody Allen a friend, and would work with him any time. She may regret being "tone-deaf" in regards to Rub & Tug and understands why her stance on Allen "is triggering for some people," but remains convinced of the director, accused of molesting his daughter Dylan Farrow, is innocent.

"I'm not a politician, and I can't lie about the way I feel about things," she says. "I don't have that. It's just not a part of my personality. I don't want to have to edit myself, or temper what I think or say. I can't live that way. It's just not me. And also I think that when you have that kind of integrity, it's going to probably rub people, some people, the wrong way. And that's kind of par for the course, I guess."