How can a person elevate their drag beyond what's expected? We seem to be saturated with drag queens at the moment — all shapes, all sizes, all backgrounds. That's fantastic, but it has also lead to a certain amount of similarity between queens and their acts. The question remains: how does a performer go beyond a sickening lip synch or a fierce lewk, and reach for something deeper?

Luckily for Sasha Velour — crowned winner of RuPaul's Drag Race Season 9 — depth is not an issue.

Velour's (first ever) one-queen show, Smoke & Mirrors, which debuted this past Thursday at New York Live Arts, presents a new way to couple drag with true conceptual performance art. The intensely personal production shows what a top-of-her-game queen Velour really is, both as an artist and as a storyteller. She takes her rapt audience through her experiences as a creative young person in New York City, determined to find peace, equilibrium, and freedom.

Playing out over two hours, two acts, and 13 distinct musical numbers, Smoke & Mirrors features enough technical wizardry and visual art to satisfy even the most invested diehards. Velour's roster of artists on her playlist are as eclectic and endearing as the queen herself: Le Tigre, Judy Garland, Céline Dion, Nina Simone, and more make sonic appearances. Each number, coupled with the excellent production value from the House of Velour (the Brooklyn-based queer artist collective Sasha and her partner Johnny Velour lead) feels like a journey through a piece of Velour's psyche — a glimpse into her dreams, into her memories. 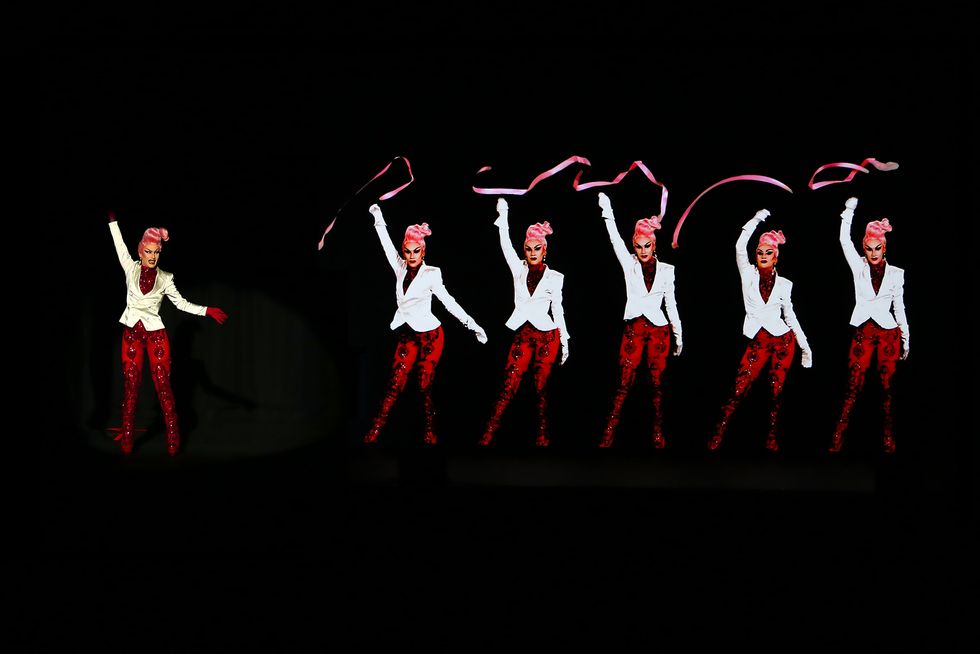 At times, Smoke & Mirrors is lively and irreverent, like when Velour tells her haters to get lost with an '80s music video-themed rendition of Le Tigre's "Deceptacon," complete with digital Sasha Velour backup dancers. Yet instances of poignancy abound, as when Velour lip syncs "If You Go Away" by Shirley Bassey, while an illustrated apple decays before the audience's eyes, only to be reanimated back to health with the help of some stage magic; Velour originally performed the piece for her ailing mother in 2015 before she passed away.

Smoke & Mirrors will make you laugh, make you jump out of your seat, and, certainly, it will make you cry. But ultimately it leaves you loving Sasha Velour, somehow, more than when you entered the theater.

PAPER spoke with Velour about Smoke & Mirrors, her inspirations, and her hopes for the future. Tickets for upcoming show dates can be purchased here. 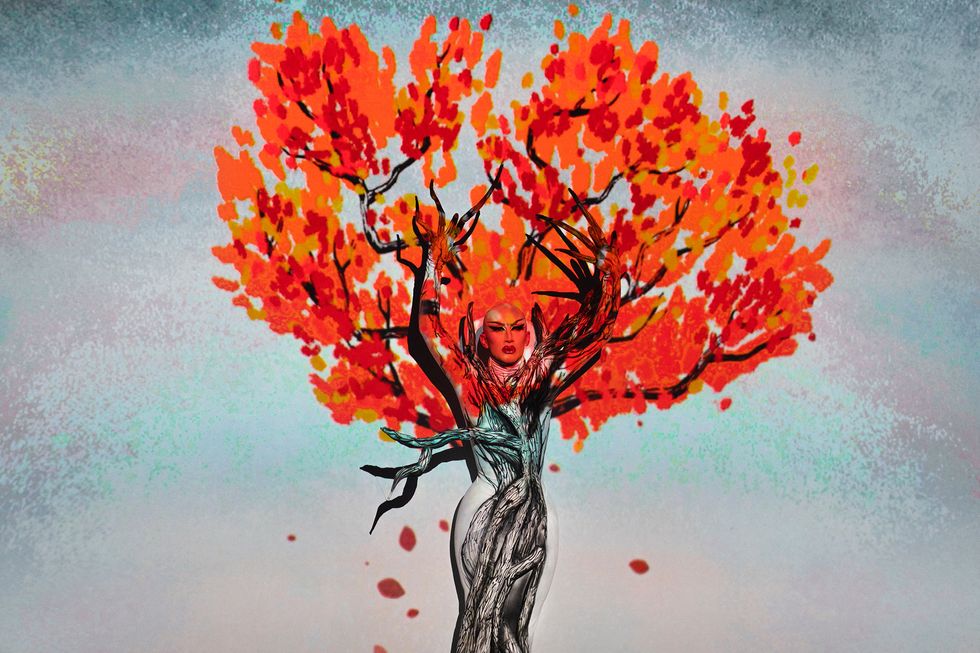 What's behind the name Smoke & Mirrors?

I have lots of reasons! My favorite being that smoke and mirrors refers to the earliest forms of theatrical trickery... magicians and early cinematic projection utilized literal mirrors to make their audiences see things that weren't really there. That's similar to drag but the difference is that queens pull back the curtain, so to speak, on the tricks. While we're making the audience's sense of reality unstable, we're showing them how it's done and giving them the tools to do it themselves.

This show is a very emotional endeavor for you. What's it like putting this much of yourself into your own show?

It feels natural, really. I consider drag to be very personal. There's always an element of deep confession in drag, and it's why I feel so comfortable telling my story via Smoke & Mirrors. I get to confess my truth through artifice, fantasy, and out of this world surrealism. The show retains layers of ambiguity and construction, just like real life.

You've been on quite a trip since the debut of 2015's Nightgowns, the acclaimed drag show produced by Velour, which ran in New York, London, and Los Angeles. How does it feel seeing your art evolve into something bigger?

It's humbling. I didn't necessarily plan all of this, I'm just really passionate about putting on shows and performing. I have moments when I'm like, I can't believe we've arrived at this place so quickly and at such a huge scale. Johnny (Velour), my partner, has been helping me make costumes and design sets since the Nightgowns days, and I'm proud of us because we learned how to do all that with the purpose of achieving a project like this some day. We pulled this off with our own hands and the help of our loving friends. 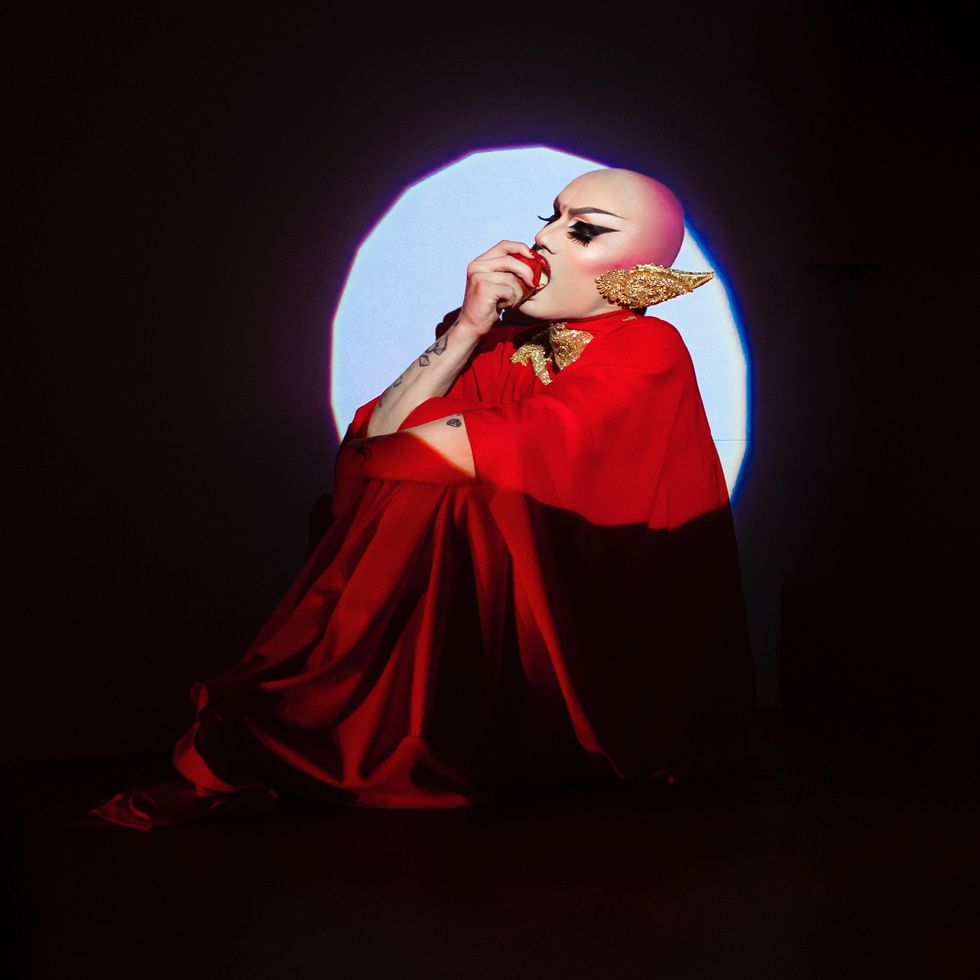 So this one-queen show is really a community effort?

Absolutely! There's no way that this could truly have been done by one person. It's the result of collaboration amongst a group of passionate people.

Music is the cornerstone of Smoke & Mirrors. How did you go about choosing your setlist?

I feel like a good drag number uses familiar songs so that people can connect to the performance with their own experiences. I love music that queer people have historically listened to, so for me that means Shirley Bassey, Celine Dion, Annie Lennox, Judy Garland. I look [for] emotional songs, songs that are happy, ecstatic, sexual, thoughtful. As long as there's real emotion in the voice, it makes a dynamic lip sync. And then I tried to change the meaning of every song, of course... that's my special project. Make every song less heterosexual!

Smoke & Mirrors is dedicated to your parents, and you give a touching monologue about losing your mother to cancer a few short years ago. You also perform "If You Go Away" by Shirley Bassey, which you originally performed for your mother before she passed. What's it like reliving that moment every night?

I hadn't really given any thought to that when I signed myself up for this! I'm used to doing a number just once, so getting to workshop these sets again and again has actually been one of the biggest unexpected elements of this show for me. I now have a deeper relationship with all of these numbers, and that's exciting because it gives me the opportunity to shift them a bit each time I perform them. My relationship with my mom inspired that piece ("If You Go Away"), and then informed the reason why I never wanted to perform it ever again... and she's now the inspiration for bringing it back to life for Smoke & Mirrors. Putting this show together is as much therapeutic as it is entertaining. My ultimate goal is always to put on a good show, and I never lose sight of that. That's what allows me to go to these places when I perform. 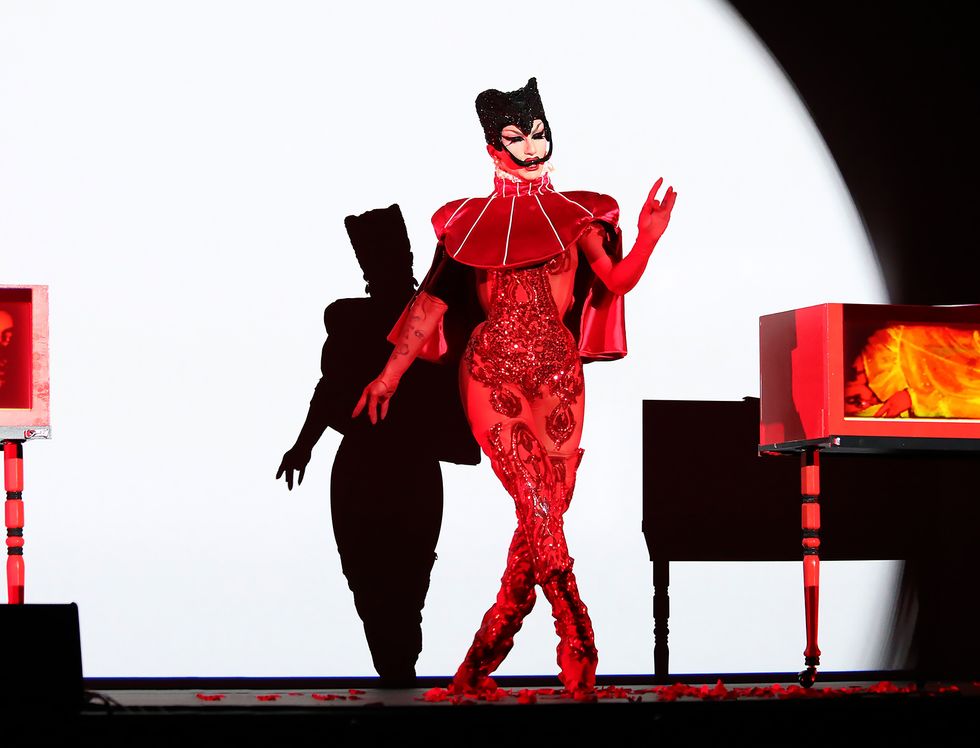 You mention in the show that life is more like a mandhala, or the wheel of Samsara, than linear. How do you think linear thought patterns in contemporary culture is hurting us?

I have been thinking a great deal about this recently. I think linearity goes hand in hand with fixed identities for gender. Like, the idea that you have to be all in for one specific state is unsustainable. The notion that you need to conform to an idea of masculinity or femininity which is so limited and binary... it's really an impossible burden for most people.

And in terms of linear thinking, the idea that we should be able to completely leave behind our hurt for success, or completely rid ourselves of bitterness for happiness... I don't know if that's useful. We all flow in and out of many different ways of dealing with things.

"Finding new ways of celebrating growth without being linear has been the real journey of my life."

Humans are more complicated than that.

Smoke & Mirrors was also inspired by the experiences I've had with success over the last two years. I am part of an enormous phenomenon, Drag Race, but I also recognize that it's not completely free of its problems. I've had opportunities handed to me that I've dreamt of my whole life, but I'm also dealing with mental illness and anxiety in ways that I never have before. So my story is far from a clean cut linear one, you know, going from a 'bad place' to a 'good place.' I don't think that's how it works. Finding new ways of celebrating growth without being linear has been the real journey of my life.

And what are your hopes for the future of Smoke & Mirrors?

I'm hoping to take it out on tour in the rest of the US and in Europe. Creating a successful drag tour is a massive challenge, but one I'm excited to face head on. 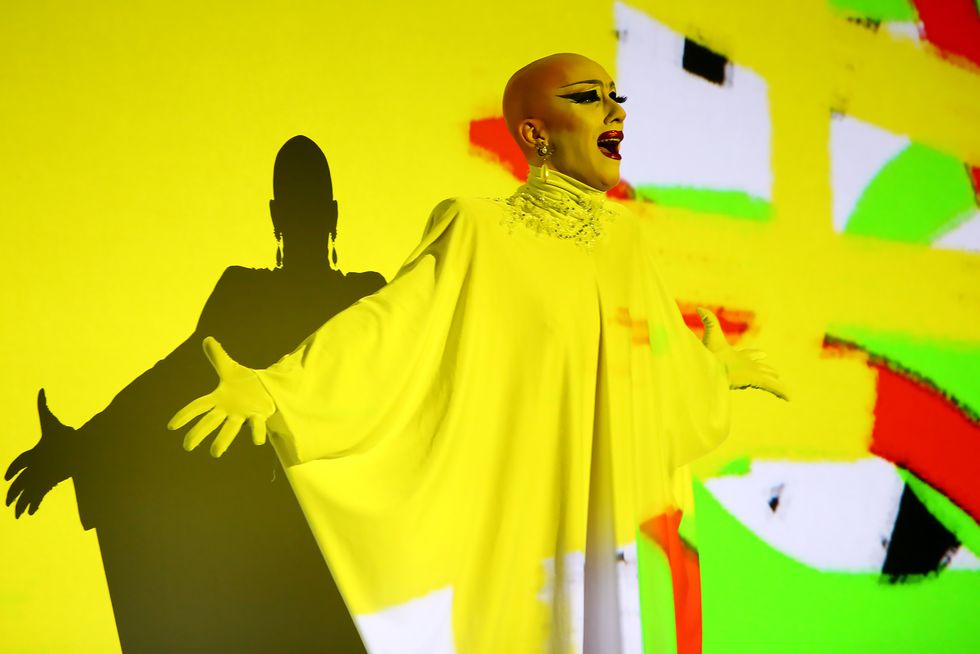 Sasha Velour will also be performing at Frankie Sharp's soiree Godmother at 3 Dollar Bill in Brooklyn on April 5. Get your tickets to that here.