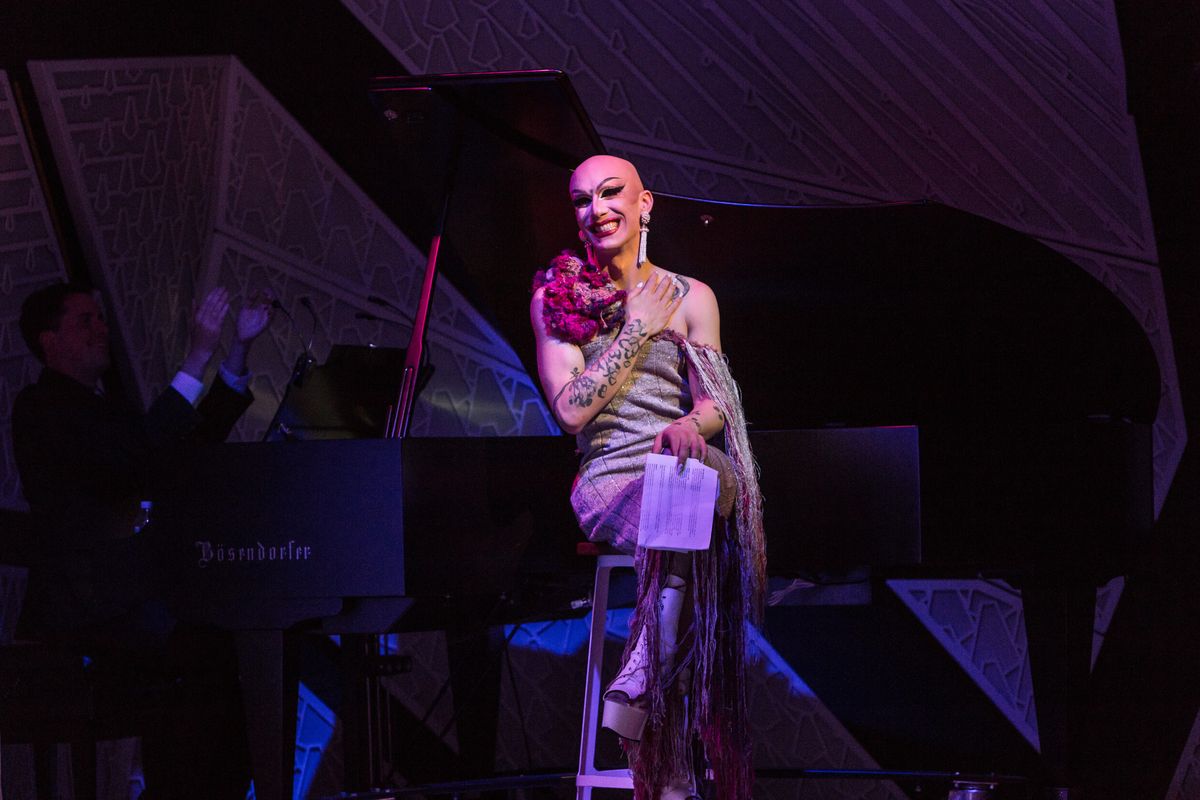 A Night of Drag Activism with Sasha Velour

It's been a whirlwind week since Brooklyn's Sasha Velour was crowned the winner of RuPaul's Drag Race Season 9. Since then, she was in the NYC Pride Parade atop the Logo network float wearing a Diego Montoya graphic gown; she hosted her 30th birthday with a party that raised $2,000 for charity, touched down in Orlando for a performance at Parliament House and even reunited with Shea Coulee in Ohio for a gig. On Wednesday night, though, the bad queen was back in her home borough, hosting her drag show Nightgowns.

"I ruined a vintage dress [over her win]," co-host, Olive d'Nightlife said on stage of Velour's victory. "Ripped the sleeves right off, sequins everywhere! And then there was all of this press but there was this one little line that stuck out to me. It said 'A superstar shares her spotlight,' and Sasha definitely does that."

While the night doubled as the official launch of Velour: The Drag Magazine issue 3, on stage, Velour shared her spotlight with the likes of Vander Von Nodd, Tyler Ashley, Merrie Cherry and more. But as a drag focused event exploring all varieties of drag, there was a strong showing of support for trans-identified and non binary talent.

"The picture of drag just isn't complete without trans people," Velour told PAPER. "Trans and non-binary folks alike have always been central [to drag], and Nightgowns and Velour: The Drag Magazine tries to honor that." Of those performers a definite highlight was a number by Daphne Sumtimez who rewrote "Impossible" from Cinderella, the musical, to "She's Passable," a missive about performative gender and the binary tropes trans people encounter.

The conversation of what is drag and who is a part of that community, particularly as it comes to trans people, is an interesting one. Online, Trinity Taylor, who was also a finalist on this season of Drag Race, voiced her thoughts as it related to the show. "I feel like RuPaul's Drag Race, the way the show has built itself, is transformation. Initially it was built off transformation from boy to girl," she said. "I think there should be another show like Drag Race that is an all inclusive show that's for all types of entertainers that do drag." And maybe Nightgowns is that venue as Velour has plans to expand outside of Brooklyn.

"Originally Nightgowns was created as a celebration of Brooklyn drag, but now that I have an international audience, I think the scope of the show should expand as well," Velour said. "We plan to pack up our traveling circus and take the show on the road, connecting with drag talents and audiences all over the country." Along the way, like with Wednesday's event that benefitted Princess Jenae Place, which is a nonprofit benefiting trans people, Velour plans to raise funds for queer people in need of support.

"That's the true spirit of drag," she said. "Not just fierce shows, but an activist spirit."