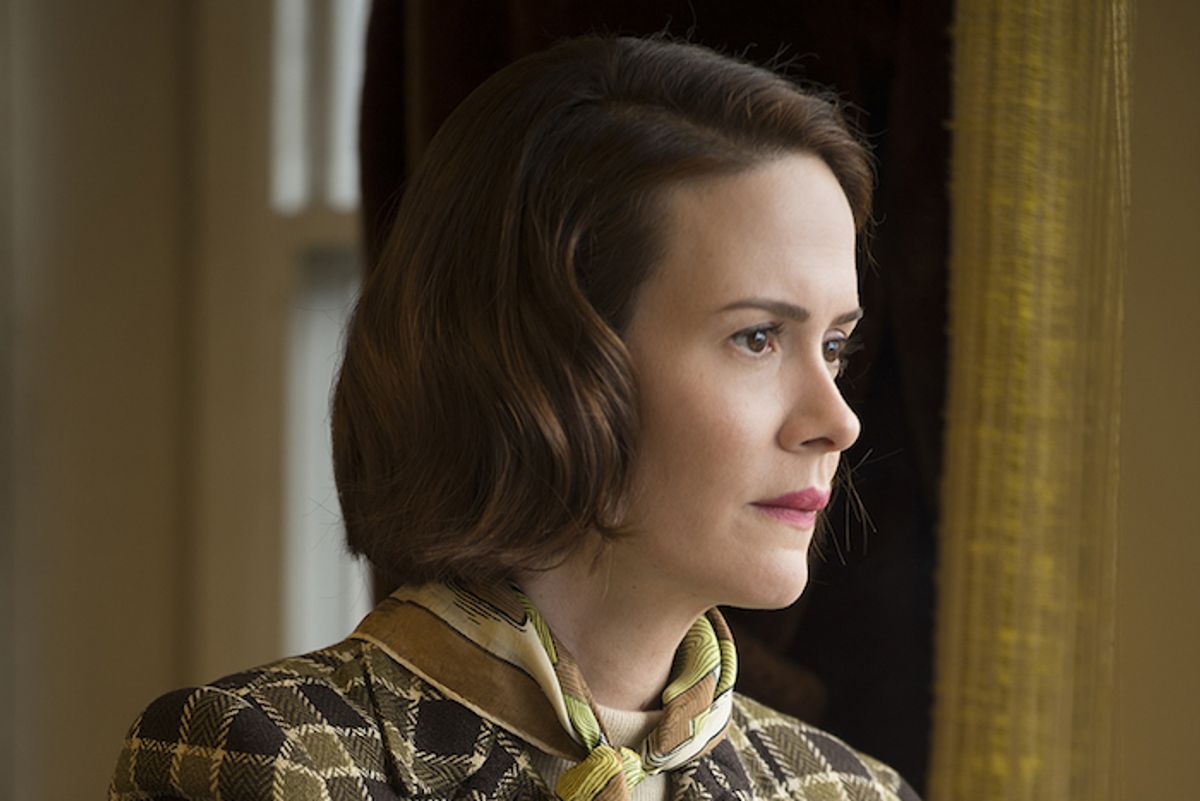 Most of the award chatter concerning Todd Haynes' new film Carol has focused on the glamorous and highly stylized performances by the leads, Cate Blanchett and Rooney Mara. But it's Sarah Paulson's wry turn as Blanchett's ex Abby Gerhard that helps ground the film, and keeps things on just the right side of the "too abstract/just abstract enough axis," always a concern with Haynes' work.

From Deadwood to 12 Years a Slave to Game Change, Paulson has a knack for adding just the right spice to a project, be it daffy slapstick or blood-curdling villainy. Such is her versatility that producer Ryan Murphy has had her on every season of his ever-rebooting anthology series American Horror Story, and next year she'll star in American Crime Story, Murphy's new true crime series for FX; the first season focuses on the O.J. Simpson trial.

PAPER talked with Paulson at New York's Marriott Essex House a few days before the wide release of Carol. Here's her thoughts on why she didn't mind auditioning for her part, working with Haynes and what to expect from American Crime Story.

You had never worked with Todd before. Had you always wanted to?

I was a huge fan of that movie, Safe. It was the first time I had ever seen anything of his, and it was the first time I had really seen Julianne Moore, also. I remember thinking what an achingly real performance she gave in that movie, and how terrifying and completely fully-realized that world was to me. And I just thought if I had a chance to work with him, I really would kill to do it. So, when this presented itself, which was me making an audition take with a casting director for 45 minutes in a room...

I did audition. I fought like a dog to get it. A lot of girls wanted this part. You know, you have a movie with three women in it, and two of them are being played by very talented, very famous women, and you have one role where you go, "Okay, this one I could maybe get." And so that brings out every person in that would who could maybe get that part, because everyone wants to work with Todd and everyone wanted to work with Cate and Rooney.

Did you mind auditioning?

I don't mind it, because I sort of feel like I would almost rather arrive on a set knowing that they saw what I had in mind to do, or what my take or my instincts were, rather than be hired based on other work I had done, only to get there and my take on it was really not right or not what they're wanting. And so that sort of adds an element... it's really nerve racking anyways, because you show up on set, it's Todd Haynes, you've just seen Cate Blanchett and she just won the Academy Award the week before and you need a diaper anyway.

Had that happened? Had she just won the award?

Did you do a lot of research to get into the character for this?

I did research, in the sense that I read the book and I wanted to learn as much about Abby — there's a lot more Abby in the book ( the film is an adaptation of Phyllis Nagy's novel The Price of Salt), which I think was helpful for me in terms of approaching the character, in terms of keeping in mind all of her jealousies and feeling threatened by this young woman who's coming in to take over not only her friend, but her ex-love.

There's a theory in art criticism that whenever anyone's creating something about the past, they're really commenting on the time period they live in. What do you think Carol says about today's climate?

Interesting. This is either just my limitations as a human being, but I never really think of things in that way. I think this movie is a story about two people in love and what that looks like to those two people and to the people in their orbit and the consequences of all of that. I think love is often — obviously I think it makes the artistic world go round musically and cinematically and stage and art and dance and it's a lot of these sort of governing themes — but it's painful, man. And I think this movie has all that: unrequited love on both her side and my side for Carol — you know that Carol doesn't really reciprocate it — and also friendship love and loyalty. I don't know, I don't really know what it's saying about our climate or our world today. I don't really know because, I don't really think that way. I understand it in theory, but I don't think that way, so it's hard for me to address it.

10 years ago, with Brokeback Mountain or Todd's own Far From Heaven, the chatter was always about "this gay love story." It seems that at this point, people are just focusing on the story itself. What's the reception been like on your end?

Yeah, well that shows you how far we've come. And also, some people still want to call it a "gay movie" and that's maybe how not far we've come. To me, it's really a story about... I don't really know the difference between homosexual love and heterosexual love. I don't think there is one. Love is love. I know it sounds sort of pat, but things are pat because they're true. A cliché is a cliché because it was true first. So I do really think it's just a love story.

What's it like going from working on American Horror Story which is very gothic and over-the-top, to Todd's method, which is a very restrained, semiotic-based approach to performing?

To me, it's the great good fortune that I've had to be able to play in that sandbox, even though I live in this other house, which is this horror story madhouse. And those kinds of extremes just give a kind of texture to the things I get to do, which makes me appreciate both in a wonderful way. If I was only on Horror Story and not getting to go into this other world, I wonder if I would go crazy. But because I get to do so many different things every year on the show, and do completely different characters and start from scratch every time, I don't feel that sense of like, "get me out of here, I gotta do something different," because every year, I'm doing something different, even if the characters have some parallel things going on internally. I think it's really exciting and thrilling for me! I get to do both. I do think it's rare.

What's it like getting ready for a scene when you know you're not doing it a whole lot, but this one little gesture or look you make has to tell a huge story? You don't get to use much. How do you nail that?

It's interesting, because I don't think of it that way, I'm just trying to be alive in the moment, and it's very easy to do with Cate and it's very easy to do with Rooney. So, it was just trying to be present, and if you're present, you're liable to get those looks coming out of you anyway. You're actually not trying to get them or convey them. And actually, there's plenty of dialogue or things that we shot that did not make the film and what was more important and what was opted for was the silent communication. So some of those silent communications were fueled by conversations that had been had that was just not been seen on film.

So he made it even more minimalist in editing.

Yes, exactly. He absolutely did. There's a whole part in the scene with Cate in the bar where I say, "you tell me you know what you're doing," and in that scene, I had said, "let's get back together, let's open a furniture store." And she had says, "no, I'm not going to do that, Abby." And that's when I say, "Oh, I've met a redhead, I've got my eye on a redhead." Well, in the movie, it just looks like I'm talking about some sassy redhead I want to go out with. And I could see that my eyes were kind of red and it's shot from above and it's because in the previous moment, I had said, "do you want to do this?" So I had made a sort of vulnerable ask and she says, "no," and I just pretend there's something else going on.

So what are you allowed to say about American Crime Story?

What do you want to know?

Who are you playing?

Wow. Has it been filmed?

Yeah, we just finished about two weeks ago.

So is it like American Horror Story and completely crazy or is it a little more...

No it's absolutely more — I mean it's certainly rife with its own drama, I mean, my god, nothing could be a more dramatic circumstance to find oneself in. But it's much more about the lawyers and O.J. too, in terms of what everyone's lives were like when the trials were going on. You learn about Marcia's personal life and the really hideous realities that were going on with her. She's going through a terrible divorce; she's got custody issues with a three and a five-year-old child. She's a civil servant thrust on the national stage and completely ill-equipped for all of that. She didn't really have the razzle-dazzle to muscle through in the Cochran-esque way or the Shapiro-esque way. She just wasn't always successful in the hair department (laughs). I know Ryan Murphy's at the helm of Crime Story as well, but there are facts that we have to follow, so it doesn't have that same sort of extreme sense of...

Literally anything could happen.

Literally anything could happen. There are confines, there are boundaries to what can be done, but when you're actually getting our behind-the-scene things, you know you could watch every moment of the trial and not know personally what was going on with the lawyers and how many things were hitting the wall, literally, in the DA's office and what it was costing them all emotionally to do. It was quite full of drama.