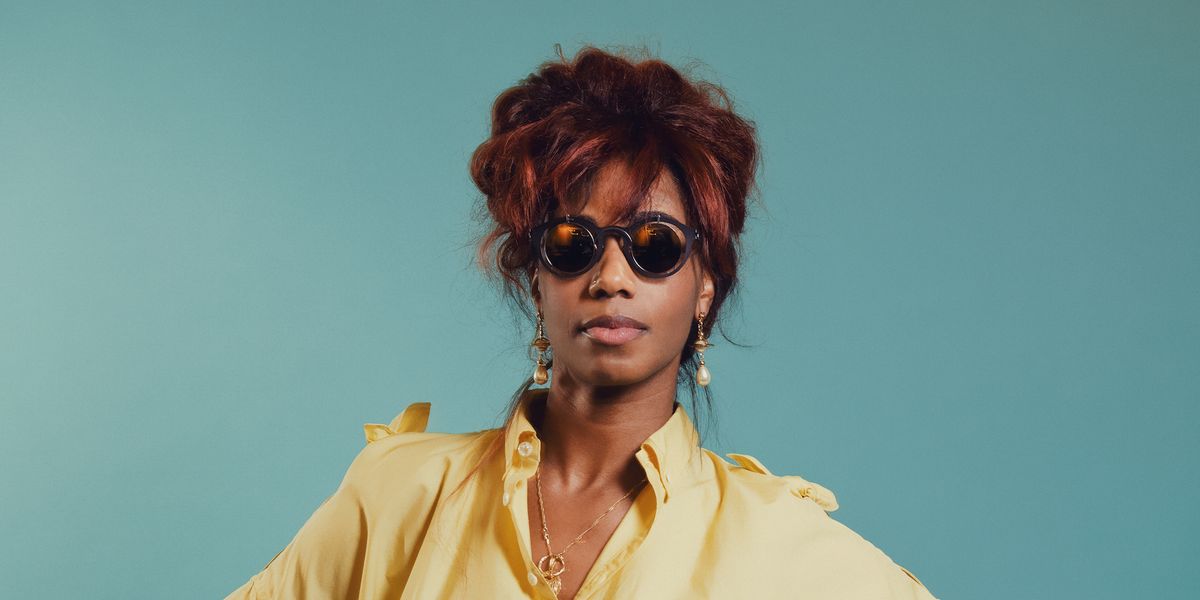 Santigold On Her New Album, Motherhood, and Making a Living as an Artist

We talk to the singer ahead of the release of her new album, "99¢"

CIt's been four years since the release of Santigold's sophomore album, 2012's Master of My Make-Believe. An insatiably curious multi-disciplinary artist, Santi has remained busy since then with touring, writing, collaborating on a makeup line with Smashbox Cosmetics, appearing on The Office, and even giving birth to her son Radek in 2014. Ahead of the release of her new album, 99¢, the singer sat down with Paper to discuss the commercialization of art, the challenges of being a musician and a mom, and how she stays true to her voice.

Were there any specific sources of inspiration -- even things in different mediums like film or visual arts -- that informed this album?

There wasn't one thing that informed this record. I put my other record out in 2012, toured it until 2013, and then did a couple of other things. I like to give my mind a fallow period, a break from music where I just get to revitalize. I can't imagine if I just went straight into the next record; there's no time for growth or perspective.

During the time when I was pregnant, I was working on music really slowly. I recorded a couple of songs, and then I had my son. About two months after that, I started working on music again. I was listening to the lyrics and it seemed like I was writing a lot about what it felt like to be an artist in this cultural climate where everyone is so focused on marketing themselves all the time. It's not a way that I'd like to be as an artist, interacting with that type of self-promotion all the time, especially since it probably takes as much -- or more -- time as doing the art! So, I was like, "Oh, this is what my record's about."

Also, because I had just had my son and it's my third record, I started to get an idea of how to direct the process better. I was like, "If I'm going to keep making music, it's going to be fun for me." A lot of the things I talk about are so absurd that it's funny, and I decided to approach it from that angle, where it was this playful, fun way to get into this subject.

What do you think is behind this commercialization of music?

I think there are several causes. I think one of the causes is the fact that technology is moving at such an insane pace that we are not really developing our perspective as quickly as the technology is developing. As far as the music with all these streaming services goes, there are a couple of things at work. First of all, everybody has access to everything at once. And they're not paying for it, really. I think that changes the way that people interact with music, for sure.

Also, as an artist, you end up spending so much time making content and hardly any time making music. There's no way you can put out good music that quickly. First of all, if you're doing that, most likely you're not writing your music. Which is totally fine, but it's a different type of music. It's kind of like factory line music. The songs are great –- people love those types of pop songs. But it's just a totally different type of music than the type of music I make and that a lot of artists make. So, it kind of puts us out of this equation, which I think is sad for the landscape of what pop music is. Because we end up getting the same types of songs over and over again. You just can't put out quality that quickly, especially when you've got to tour and hustle to make money -- because you're not making money from selling your records. It's a strange time. And these are some of the things I deal with in my record. I guess that's what inspired me: my experience as an artist.

How do you find that balance of making a living, but also being true to your voice as an artist?

The main thing for me is just making sure the music is uncompromised. I make sure that I carry out my exact vision in my music. I talk about what I want to talk about, it sounds exactly like I want it to sound. And then, as a working musician, I play the game to get my music out there. So, I make the music that I want to make and then I get it out there how I can. By incorporating the topics that I want to talk about, it's like holding up a mirror to society and saying, "This is what we look like right now. Does it look as absurd to you as it does to me?" I think art is traditionally always a catalyst for propelling culture forward by basically holding a mirror up to it and then helping direct it. And I feel like that's one thing that I can do in my art that's really important to me.

Santigold wears a coat by Gucci

You mentioned before that having your son in your life has brought a new energy to your music. Outside of that, has becoming a mother changed the way you think about art or the role that art has in your life?

There's the practical answer -- which is probably not the one you're thinking about -- but, as an artist and as a mother, it's even more important to figure out how to make a living at your art. So, the issues that I'm talking about are really, really important to me right now because I do want to keep making music and I do want to be able to continue doing this as my main career, and there are a lot of things that make it really hard. Like, I've got to take my son on tour, you know? And I was like, "How do people do this?" I haven't even talked about how insanely crazy it is to be rolling out a record and doing photos and press and endless content with a less than two year old.

I was looking online and I was like, "How do you people bring cribs in a tour bus?" First of all, you can imagine that there's hardly anything on that online! And then the only things I could find were people who are like, "I customized my tour bus and had it specially built so it could incorporate the crib." So, you know, these are the real life challenges that I face every day. I'm an artist at this level and I'm trying to do some stuff, but there are not many guidebooks for the things I have to figure out.

Beyond the logistics of it, has it also shifted things on a philosophical or intellectual level?

There are certain things -- like, obviously, I care about his future, which means I care about the future of everything. I care about the earth more than ever. I know this sounds crazy, but I know I'm not the only mom who's looked at her son sleeping and thought, "Oh my god, I hope he doesn't have to live through a Terminator end of the world." I cared beforehand about all these things and I feel like my music has always been music with a message about the world and about humanity and about fear and about power.

There is one song on my record called "Big Boss Big Time Business," in which I call myself "mama" through the whole song. And it's really about how badass I have to be to handle my life as an artist and be a mommy at the same time. That's about as close a step as I get to it topically. Because, really, it's my one chance to be back in my own world. It's my space, you know? I get to be all the way for me and just in my own headspace. As a new mother, that's probably the only place I get to do that. So, I feel like I go into that place and it's a little bit separate from everything else.

Sometimes it can be hard to reconcile making art for oneself and also wanting to save the world. How do you personally reconcile pursuing your own artistic vision and also caring so much about these broader issues?

I've actually thought about it a lot because I have done other stuff for various causes –- like in 2010 I climbed Mt. Kilimanjaro for clean water awareness and I did a Save the Music thing in New Orleans. I love doing stuff like that; I really love doing more hands-on stuff. And, one day, as I was driving to the studio, this woman came up to my car and asked for money. And I was like, "Man, I'm so full of shit." I'd just been in my own world working on music. There are so many things going on in the world and I'd just kind of tuned out. But everybody has their own purpose in the world and it's really important for you to know what yours is. I do other things, but I think one of my greatest gifts is my ability to reach people through my music.

The more people come back to me to tell me that my music has inspired them for different reasons, that's what lets me know that I'm doing what I'm supposed to be doing to help make change. Even if I can help a little girl feel comfortable in her own skin or know that you're worth more than just your appearance -- that's huge. Music is so powerful, and it's not just on a lyrical level where the message lies. Sometimes you can just feel a way when listening to something and, off that feeling, you can go and do something great.