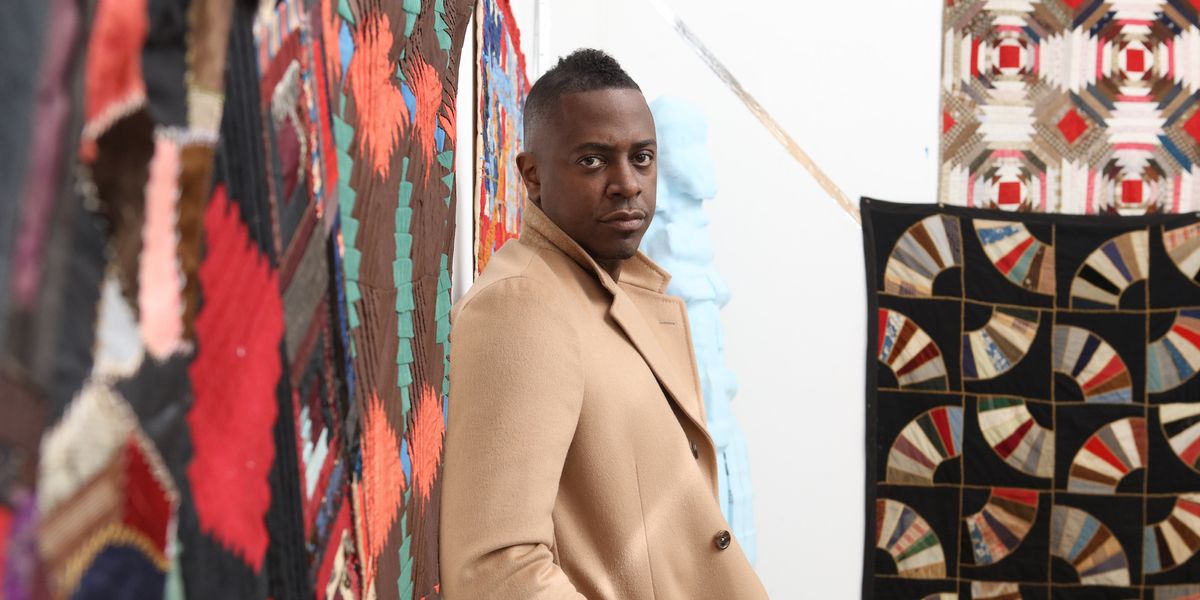 Artist Sanford Biggers' Work Needs to Be Talked About

"Art is the potential for dialogue."

Interdisciplinary artist Sanford Biggers' work is as powerful as it is timely. From quilts inspired by those used along the Underground Railroad to an etching made from drawings of an 18th century slave vessel, Biggers' work stuns even as it provokes discomfort at the thought that something whose origins are so dark could also be so beautiful. A professor at Columbia University, his work has been shown in the Tate Modern, the Whitney Museum, the Brooklyn Museum, and elsewhere.

Biggers is also a TED2016 Fellow and showed his most recent work, BAM, to a full theater of technologists, celebrities, and innovators at the TED Conference in Vancouver last week. BAM addresses police brutality through objects -- African statues dipped in wax -- "re-sculpted" by actual bullets. The project aims to start a dialogue on issues that have been brushed off for far too long. We spoke to Biggers about this and other projects and heard his thoughts about the power of art for social change.

BAM is among the most powerful works of art I've seen and the story is incredible. So let's start with the story.

I was away in Berlin for eight months, and while I was there police abuse against African-Americans [back home] started to feel like it was in the news every week. And, of course, I know that it's been happening every week forever but now people are capturing it on video so it's an issue people can't deny. For decades -- my whole life -- blacks were seen as crying wolf. And I woke up one morning and knew what I needed to do.

I've been collecting wooden African figures from thrift shops and tourist shops -- some of them are authentic and some are knock-offs made in China or Mexico.

I took those figures, and I dipped them in wax to eradicate their facial features and make them these amorphous brown masses. Then I took them to a shooting range and I re-sculpted them by shooting them with different types of firearms.

I shot seven or eight figures and once I shot them, I took the fragments and cast them in bronze. So far I've cast two -- one is a male and it's called "For Michael" and another is now on view in Chicago called "For Sandra".

As I cast more, they'll be named after victims. Theoretically I could do this forever because there's no shortage of victims.

Why was it important to make the figures anonymous?

On a very personal level, I'm a professor at Columbia University, and I can leave a restaurant or a function in a suit or tux, walk out onto the street, and if something were to go down, I know I'm as vulnerable as any other black man on the street.

I know that it's the luck of the draw that I haven't been a victim. It's ridiculous how much people don't know the struggle is real for black men on the street. This is psychological warfare. We think about this all the time because we have to.

So these anonymous figures go with you to the shooting range. What was it like pulling the trigger?

I didn't pull the trigger. I started to have misgivings about perpetuating the violence in some way. Also, I'm dealing with African figures thought to be power objects. I didn't want to put that kind of bad juju back into the work. My videographer shot the figures.

The video is gutting. What was it like to be there, to watch?

I underestimated how visceral it was. In the video, when you see the close-up angle and hear the gunshots, it's almost as if you feel each hit on your body, the sharp, sharp snap.

And then you cast the figures in bronze.

Yeah, I'm memorializing the acts, the victims. The reaction to these sculptures has been very positive. And I don't mean it's comfortable or beautiful. But everyone feels something.

I see some of my friends cringe at the video but they say they can't take their eyes off it. It fucks them up. Just one minute is long enough to be this really emotional moment that stays with you. And it reminds me that when these things happen, they happen just like that. Think about Tamar Rice. They shot him before they even got out of the car.

So my hope is that the conversation happens, that it becomes more nuanced and that there isn't finger pointing.

It's an interesting time from Black Lives Matter to the refugee crisis and a presidential election that could change everything. What role do you think art can play in the political process?

Art is a potential for dialogue – art doesn't necessarily provide the answers but should provoke people to ask better questions. I have several colleagues who think there is no such thing political art and art has no political agency. But I know different, because I've done murals in Compton and I've seen the effect work like that has.

I've written about super political issues – the refugee crisis, gay marriage – and sometimes people aren't having smart, rational conversations [on either side] because they genuinely don't know better. Young people seem especially open to some education. Which artists should people know and pay attention to?

Dread Scott has been a dedicated political artist his entire career. Hank Willis Thomas is addressing these issues.

There's a young woman Cheryl Pope in Chicago doing really interesting stuff including a recent performance at White House where she had youth write down their feelings and then someone read them off like Congress would. So unsettling and powerful.

Kendrick Lamar – I'm not limiting myself to visual artists – some of what he's doing is fantastic. That Grammy performance? That was blood on the stage. I think Beyoncé – not that I find her work particularly political or revolutionary – has an audience, and if you can polarize your audience, you can do something.