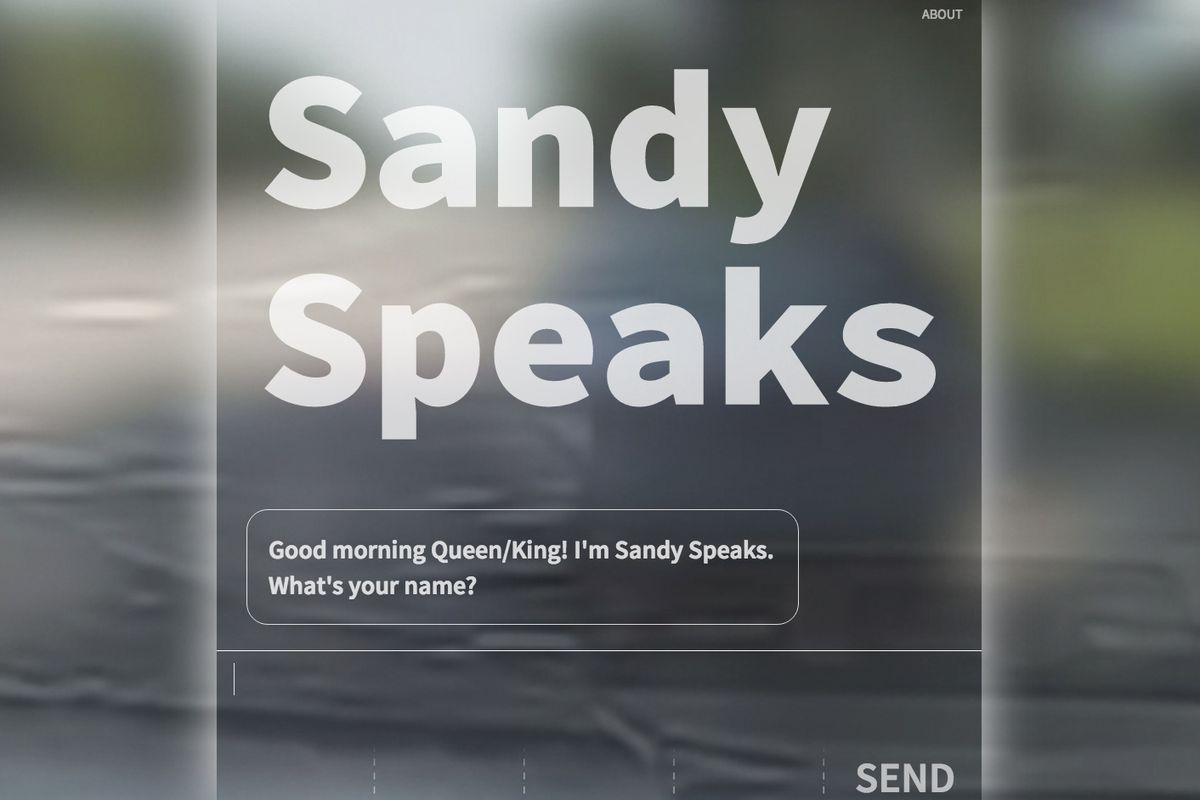 Sandy Speaks: a Chatbot That Talks Prison Statistics & the Failure of Surveillance

Our friends at NewHive are currently in the midst of a two-week-long series of commissioned artworks exploring privacy, surveillance and prison reform, and in conjunction, we'll be running a series of accompanying interviews, features and essays by the featured artists. The first installment of this series comes in the form of an essay from American Artist, who's created "Sandy Speaks," a chatbot that responds to queries about surveillance strategies, prison stats and the failure of surveillance in regards to cases like Sandra Bland.

The conflictual relationship between United States law enforcement and the public is mediated through surveillance. In lieu of strategies such as dashcams, body cams, and pedestrian cell phone footage—sold as strategies to keep police officers under control—police brutality and lethal use of force has escalated. Increased surveillance only serves to protect the interests of those in power, a principle epitomized by the case of Sandra Bland.

Sandra Bland's arrest was watched online and on television by millions of individuals, yet the moment she entered the Waller County jail was the moment surveillance failed. Discrepancies in reports by police and fragmented footage released after Bland's death allowed for conspiracies and skepticism to accumulate. The absence of surveillance footage in the 90 minutes prior to the discovery of Sandra's body highlights the contradiction of the state's interest in heightened surveillance measures. Sophisticated technologies may be implemented in an effort to proliferate documentation of police behavior, but ultimately this footage is within the control of those who seek to protect their own interests.

The 90-minute period in which Sandra Bland was not surveyed is prone to speculation. According to police she was not on suicide watch and was confined to regular surveillance increments of one officer patrolling her cell every 60 minutes, an interval which they failed to uphold. The camera that monitors the corridor Bland was held in is motion-sensitive and was not active for 90 minutes prior to when her body was found.

The only footage of Sandra after her arrest is security footage from the jail that police offered as evidence that her mug shot was not staged. Like anyone that was horrified by the way Sandra Bland was treated, I tried to piece together what actually happened, who Sandra was and what role law enforcement played in her death.

Thinking about how to frame a work around her transition from hypervisibility during her arrest to tragic invisibility at her time of death I imagined what Sandra would have said during her time in jail had she been granted a level of exposure similar to that which was applied to her encounter with the police. Had Sandra been able to live tweet her time in jail, or to make a cell phone video from inside the jail, what insight would she offer to the facts of her case, and how would she advise people of color in order to survive in a police state after her experience?

The project is named after Sandra's eponymous video series "Sandy Speaks", which was a politically-engaged series of cell phone videos that Sandra filmed and released periodically over social media in the months prior to her arrest. In "Sandy Speaks" Sandra expressed her views on police brutality, the Black Lives Matter campaign, and offered insight on how Black people of color should feel towards antagonism created by law enforcement. In the series she repeatedly acknowledges that she has a calling to educate the next generation on racial politics and that the relationship between police and Black people of color is something that can be healed through the education of youth.

Encountering Sandy Speaks, one is greeted with Sandra's effervescent phrase with which she began many of her videos, "Good Morning Kings and Queens!" extending the same warm-heartedness of Sandra's video presence that made the implications of her case ever more precarious. Creating a piece that simulates conversation with a living individual recontextualizes the legacy of Sandra Bland. It aims to continue her impetus of education through dynamic conversation. Sandy Speaks is a monument that is not stagnant, but rather an active and learning system that maintains what Sandra set out to perform.

Questions that might be asked of Sandy Speaks include: Who are you?, What can you tell me about prison?, Why do people get arrested?, What is a felony?, What is a misdemeanor?, What is prison?, What is jail? How many prisons are there?, Who is in jail?, How many people die in prison?, What do they die from?, What should I do if I get arrested?, How do I know if I'm arrested?, How do I know if I'm detained?, What does convicted mean?, What does arrested mean?, What does charged mean?, Can I film police?, What is the racial demographic breakdown of cops?, What is Black Lives Matter?, Who started Black Lives Matter? What can you tell me about surveillance?, What kind of surveillance do police use?, What kind of surveillance do they use in prison? What do you know about Sandra Bland?, Who is Sandra?, What happened to Sandra?, Am I required to put out my cigarette if I get pulled over?, Why was Sandra arrested? What happened to Sandra in jail?, What's your relationship to Sandra? Why were you made?

Sandy Speaks is a built around a script written in AIML (Artificial Intelligence Markup Language), which can be programmed to simulate conversation with a human individual. Chat bots like Sandy have been heavily incorporated into bureaucratic systems as an entry point that a person must consult before connecting with a human counterpart. In state departments and similarly nebulous corporate networks, devices such as chat bots and phone message systems are meticulous patterns within which one gets bogged down and demoralized towards obtaining the information they are interested in. The design of a chatbot mirrors this format on a micro level, composed by thousands of individual AIML tags, each tag serves to capture a specific input and output a relevant response. Each tag functions similar to a bureaucrat within a bureaucracy, working together to create an opaque and impenetrable administration.

Contrary to this, Sandy Speaks takes after the calling of Sandra Bland. As she states her purpose "I want to educate people on how to survive in our country in it's current state." Sandy aims to open conversation and extend knowledge to users. The same motivation that prefaced the videos created by Sandra is mimicked by the bot which seeks to answer and make transparent issues on prison surveillance, police brutality, and the case of Sandra Bland.

The initiation of Sandy Speaks is the beginning of an ongoing conversation between the bot and those that engage with it. The nature of a bot is that it learns by receiving questions, and over time it increases its artificial intelligence. In this fashion Sandy Speaks seeks to find out what people want to know about these topics. As she receives those questions, she will acquire new answers. As such it represents the beginning of a larger conversation between the public and law enforcement. The beginning of the conversation won't be smooth, but rather awkward, because society is still learning the kinds of questions it should be asking and what level of transparency it is entitled to demand. And Sandy Speaks is still learning how to respond.


American Artist is a New York-based artist who makes work in the form of texts, videos and performances about culture and technology in America. This began with the change of their legal name to American Artist. The name is both a declaration and an erasure. As an African-American it is an assertion of what an American Artist looks like. As a user and avatar in the Internet it is an anonymous name, unable to be googled or validated by a computer as a person's name. Artist uses this ambivalent position to make work that critiques systemic antagonisms within the United States. They recently completed an MFA in Fine Art from Parsons, The New School for Design and are currently a resident of the Whitney Museum Independent Study Program. They have exhibited art internationally at UNPAINTED Lab 3.0 Munich and have published writing in The New Inquiry and New Criticals.