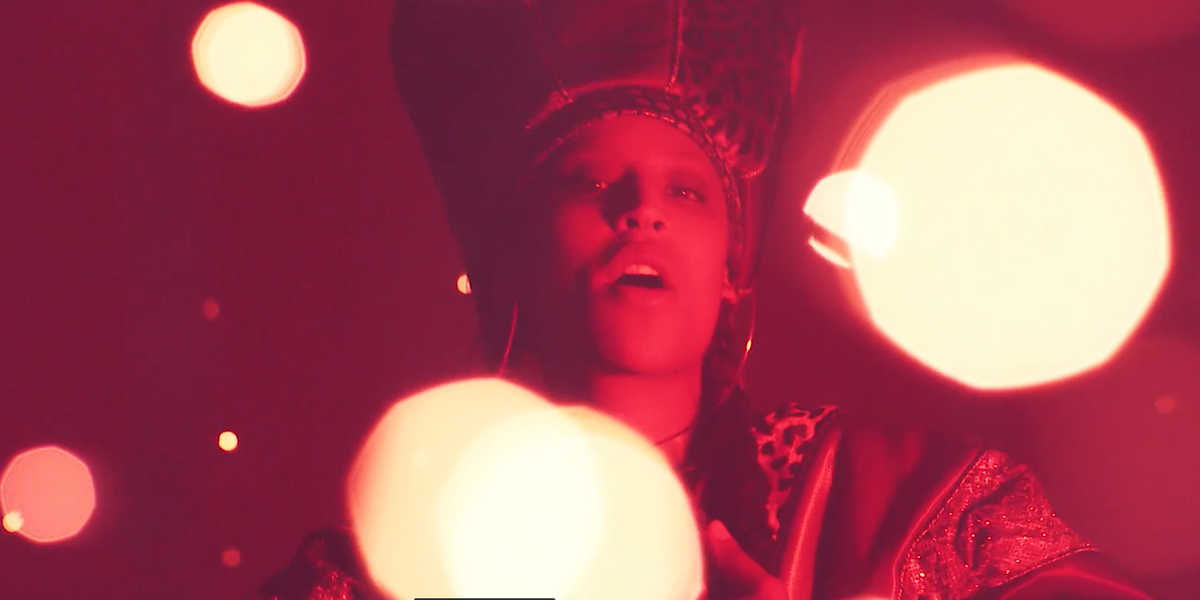 Brooklyn Singer Sandflower Wants You to Sit at Her Lunch Table

Sandflower is Brooklyn's best kept secret. Her slick, catchy rap-infused pop songs are always paired with gorgeous visuals teeming with effortless confidence. She recently performed on SNL with rising pop star Dua Lipa. She is also working with Sprayground's founder and designer, DBD, on his upcoming music project "Money on the Plane", and has a project coming out soon called Goddess Culture that centers on and celebrates femininity.

Included on the project is a track called "No Regulas," which Sandflower says "is the real song of a New Yorker. It's a little autobiographical. It's about what it's like being a kid growing up in the city. You can thrive and put on your crown and shine. The song is from Goddess Culture, where each song is representative of a goddess and empowering women. You can sit at my lunch table, whoever you are."

PAPER sat down to talk about "No Regulas," the way New York City serves as the perfect backdrop for her work, and the significance fashion plays in her music and daily life.

What was the process of filming "No Regulas" like?

The director Zach Meyer and I had a bunch of meetings where we talked to each other about what it means to not be regular. I told Zack the story of how I was inspired to write this song. I went to private school as a kid, and I was really bullied because I was the only kid of color. Since then for me, it's all about owning your non-regular-ness, and instead of being the bully telling kids they can't sit next to you at the lunch table, being like, "You wanna sit at this table! This table is lit! This is the place you want to be."

We're all multicultural people, and we both wanted to represent people from different ethnicities. It was really great to not only have beautiful people in the music video and have cool video, but also have every person including the crew that worked on the video really resonate with the idea of not being regular.

Do you think of your work as political?

You know, I used to be scared of [the question] "Is my music political?" Cause when I was growing up, it felt like political music wasn't really cool, people didn't listen to it. but I feel like every single artist who is about who they are, whether it's Jimi Hendrix, or Janelle Monáe or Björk, they are political. And I hope to be the type of artist who makes people say, "Ok they made amazing music, they made amazing visuals - it touched people. And the fact that they were representing who they were, yes they are political."

What you said about wanting to make really cool work that is inclusive, that brings people in — that's a political act in and of itself. I feel that making space for people whose stories aren't told enough and showing the beauty in them is a political act. I also wanted to ask, how did you decide on the styling of the video?

Brad Callahan [of BCALLA] , the designer, is one of the most amazing people that I know. He's styled Violet Chachki of RuPaul's Drag Race. [He represents] the fashion that just is New York, that can get you attention when you walk in a room because you don't got time to blend in, you know what I mean? So Brad had a shoot and had me and all these other amazing artists come together. He was like, "I really want you to be a part of this, I've got this look that I think you're going to love," and I did because I love Nefertiti realness, Cleopatra, Ancient Egypt, yes yes yes, all day long. And he gave me that look actually. Almost every video that I've done, I've worn something by Brad.

All of your videos are so highly stylized and beautiful. Do you feel like fashion and styling elevates your music?

Yes, absolutely. My mom's a musician too, and she used to get all these fashion magazines like Vogue, Vanity Fair, everything. When I was little I remember sitting in the tub, and reaching over around the side, turning the pages of these magazines, and looking at the fashion, and sort of imagining what it would be like to wear these clothes.

I would see her getting dressed and ready. She had a designer who she worked with, or we would like go to Patricia Field's and look at these spiked heels and gigantic wigs, and I would just love it. I aspired to be able to have [the kind of] impact where the second somebody sees something I create, or sees a photo, they know that I have a point of view and they want to talk to me about it.

I can be a little hyper aware of visuals because how you dress can protect you from standing out and being noticed, or it can help you put a shield up. Especially in New York, since there's so much walking and interacting with people on a daily basis, I feel like having that awareness is helpful.

I grew up in a Pennsylvania suburb, and I felt like I never interacted with people. I would just get in a car, and go the grocery store, and go home. But in New York, just going anywhere I'll see dozens and dozens of people, so it feels like it's worth it to dress up when I get groceries. It's still an event, still a way to express my personality.

It's an event, and it's a fun moment. There's not a right or wrong choice. I also don't wanna be one of those people that's like, "You gotta wear Prada or you can't say hello." That's not where I'm coming from. Especially in New York, when you see street style, it can be a mix. It can be like my grandmother's favorite gloves mixed with something that I got from a friend mixed with something I found at a vintage store. Or something that a friend made, that's even better.

You can wear whatever you want to the bodega, but sometimes if I've been in the house for a few days and it's been snowing, yes, I might wear an evening gown to get my bagel.

You mentioned that your mom is a singer. Are both of your parents musicians?

My mom is a musician, and my dad is a painter. So like album covers, and large-scale visual arts.

How did your parents influence your work?

I think my parents influenced my work in a way that was all about the art first. Even before it becomes something that's popular, or something that people will like, [they emphasized] art as in, "How are you telling your story?" And, "How are you telling it in a way that's unique to you?" Ultimately seeing their process of shutting the world out and then creating what is in their hearts influenced me.

I also grew up literally doing homework in a music studio, seeing shows, and going to meetings. So, I mean yes, I could have done other things, maybe I will do other things in life, but seeing that and being named Sandflower, it kind of set me up to be an artist.

This is going back to your political question earlier — when you're breaking down what you have been taught to believe on any level, whether it's "I should stand here when I'm waiting for the train," or it's, "Women are supposed to do this." or, "People of color do this." you realize not only is it not true, but it's wrong. When you start taking these steps, I guess you're inherently political. Just being happy in a society that tells you you need all these extra things to even be considered a person, I feel like that's an act of activism.

Making space for joy in a world that doesn't necessarily encourage it is a political act.

You also talk about growing up in New York, and seems like it influences your work.

I love New York City. I love it. I love Brooklyn. I'm so happy to be from here.

New York has been an amazing backdrop for my work, because I've been able to see so much beauty, and so much strength and not just in the people that have raised me, but the resilience of the New Yorker. Getting up, walking out of your house, getting on the train, getting to work, battling through the sea of people, keeping your mind straight, keeping your head clear, coming home, there's like a rhythm and a system in New York. If you get into the grove of it, it can really carry you forward, but if you don't, it can also really knock you down. So having grown up here, I've seen all the different musical movements and art movements, and fashion. I could just sit on any given street corner and watch people and get inspired by whatever it is I'm going to see. I can hear music at any moment, whether it's just somebody humming to themselves walking down the street, or a poem on the side of a building that somebody felt the need to write on somebody's door. It's kind of distilled me as a human being. being in the city makes me focus because it's so easy to get distracted here.