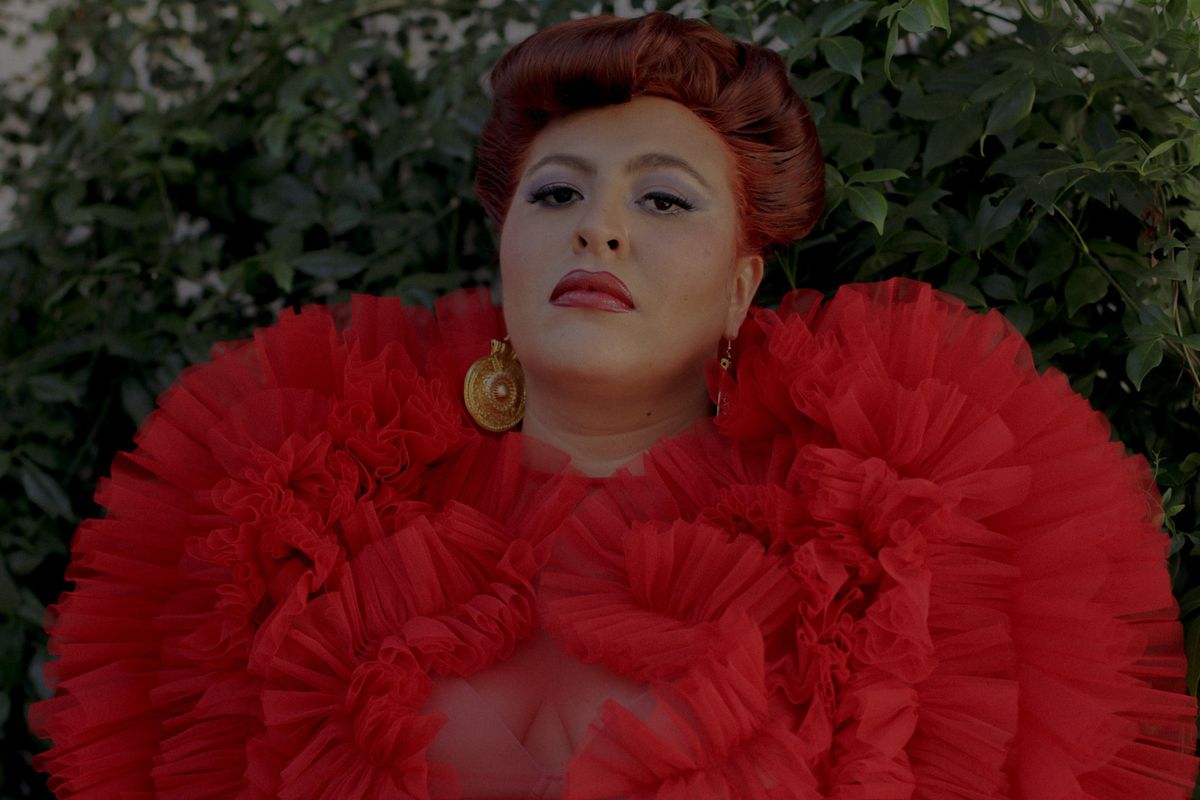 When San Cha was six years old, she knew she would become a performer. Her earliest musical memories begin with watching school band performances, where she realized she would take the stage herself one day. She started with the flute, always keeping it on her and practicing whenever she had the chance. This world of sound made sense to her; as the child of Mexican immigrants, performance became a way to bypass her surroundings.

The Bay Area native now resides in Los Angeles, where she joins a legacy of queer Mexican artists who have been fusing Punk, Cumbia, and Latin Rhythms for decades. San Cha relies visually on the drama and glamour of telenovelas, speaking directly to a first-generation latinx crowd whose disenchantment with the American dream has left them wanting more. Her music has a sense of urgency — a feeling she hopes to incite in her audience.

PAPER caught up with her three days before her headlining show with Red Bull Music Festival, as she prepared all the original music and costumes for the performance. This moment had been years in the making, and San Cha is very clear about one thing: fantasy is reality.

You just had a photoshoot that took place in Hotel Figueroa, where you partnered with NAVI and Lady Soulfly to create truly beautiful images. Why were these important for you to create?

The performance I'm doing is a telenovela, so I wanted these photographs to make me look rich. That kind of extravagant rich that you see in telenovelas, that's how I imagine what it's like to be rich. Big dresses, like the '90s telenovela Marimar, when she finally gets rich and is always in big gowns, hair always on point. Those were the kind of visions I was having. The character we created was very rich, but also very sad and unfulfilled. There's an '80s Mexican duo called Pimpinela, and all their songs were like telenovela. They were theatrical, and the themes of their music were always about wanting more. That's what telenovelas are about.

Why are telenovelas such an important part of your performance?

This has been an idea I've had for years, and it's taken me a while to execute because I knew from the beginning that I wanted the fantasy to feel realistic. I wanted the big gowns, and I wanted to not be making things by myself. When you're broke and brown in a DIY scene, there are scarce resources. I knew I wanted it to look the way that the images from Hotel Figueroa did. I wanted it to be grand. Even in newer telenovelas, like Casa de las Flores, everything is about money. Having money, or trying to get money. Starting out poor and becoming rich is a common trope. I wanted to play around with that, because for some reason that theme sticks with a lot of people from latinx culture. Especially being Mexican, with parents from rural towns. Believing that the American dream is about owning homes and cars. If they didn't come to this country, it wouldn't have been possible. It goes beyond just a dream, it is an obsession to become rich.

What do you remember from watching telenovelas growing up?

There was one called Lasos de armor, and the drama was so heightened that I was scared! and weirdly turned on at certain points. I felt everything, all at once, and it was so much. At first it seems exaggerated, but I just remember all the feelings that I would get. I'd feel stressed out, or angry with people. I felt everything they were trying to communicate.

Is that how you want your audience to feel?

"All the things that you can't do in life, you can do on stage."

When did music enter your life, was it before the telenovelas?

When I was a kid, one of my earliest memories is watching the band perform at school. I might have been six, I remember looking at [them] thinking that was going to be me. When the school got instruments for the students to use, I was one of the first people to sign up. I started playing the flute, and I took it everywhere, and practiced everywhere, driving my mom crazy. I became so attached to it. I remember going to a friend's house and she had an organ, and it was easy for me to play what I was playing on the flute. Just transfer it over to the piano, and it all just made sense. This world just makes sense to me. That was my first discovery of loving music.

How does Los Angeles play a role in nurturing your love of music?

LA is a place filled with musicians, and it was easy when I got here to find the kind of musicians I was looking for. The collaboration was natural, because they were already doing what I had been envisioning. People here have always been incorporating elements of punk, cumbia, and latin rhythms. For years, even decades. The idea of mixing all the things that you are isn't new here. I had a band here before I even had a job.

What do you find most exciting about the latinx LA scene?

When I got here, it was Nacho who took me under his wing. Mustache Mondays was its own thing, and the crowd was so different from most parties in the bay area. It was mostly Brown and Black people, dancing to all kinds of music. It was everything, all at once, all the time. My other mentor Rudy, who used to do Maricon Collective, were two visual artists that would do paintings of cholos making out, and a bunch of parties where they sold shirts and hats. Recently he's started a party called Scum, which is a queer punk party in East LA. It's for kids that grew up in punk, but there are kids who just want to hang out. It's a huge mix of people who are Brown, and feel like outcasts.

That sounds incredible. How did you decide to pursue a life of music and creativity?

The decision was easy for me, because I never questioned it. Still, it's been hard to justify it to my parents and the rest of my family. It's gotten to the point where my mom doesn't come to see me perform. She's sort of afraid to enter that world. She thinks I'm just getting naked in front of people, which is true sometimes [Laughs]. It wasn't until I started singing rancheras that my family thought I might have a gift. I'm their broken crazy child, and one day I'll find my way [Laughs].

What does performance mean to you?

It's like a big release. All the things that you can't do in life, you can do on stage. I remember singing in the church choir, and there would be long moments of silence during service. I was on a stage in front of everyone, and I could barely breathe during those quiet moments. In my head, I wondered what would happen if I began rolling around on the ground, screaming. I imagined that a lot, and now that I'm a performer I realize that it's what I do all the time. All the things I imagined myself doing, I do it on stage. It's like it's not me sometimes. Sometimes things come through me, and they help me be free. Which is also how songwriting feels. These ideas aren't coming from myself, they're from somewhere else.

As a first-generation Mexican, how does it feel to be bringing all of that to your own headlining show at the Red Bull Music Festival?

I feel nervous all the time [Laughs]. I feel stunned, trying to get through all the work that it requires. I committed myself to writing 13 new songs in two months. I knew that it would happen, but at times I found myself frustrated. I never doubted it, and it was worth losing sleep. I have a new confidence in my skills, and songwriting. It is work. I'm confident in the people I'm working with, and our ability to make this show into what we've been dreaming of.

You'll also be performing in the halls of Vibiana, a 19th century cathedral in Downtown Los Angeles. That's so cool.

The cathedral is so perfect for me, because the show has a wedding scene! It's going to make it all more like a telenovela, just like I've always imagined it. I'm going to use every part of that cathedral.

This also gives you the chance to showcase the work of your friends and collaborators. How does that feel?

I've been working with my friend Olima since day one, he is the one who is creating the outfits for the show. He was one of the first people who believed in me, even before hearing me sing. I didn't have a job when I first moved to Los Angeles, so we would go to goodwill and he'd re-make outfits for me. It was nice to get this opportunity, so that we could make real garments that have his name on them. We got to really make this grand. It's sort of a fashion show for him, since we've made three outfits. I wanted projections, and my friend Luke Baldwin is a visual mastermind. He's doing all the visuals for the show, and they accompany the music perfectly. I would give him small ideas, and he would be able to make them huge. It's been reassuring to have them along with me. Sebastian Hernandez is working with me on movement, since I will also be dancing in the show.