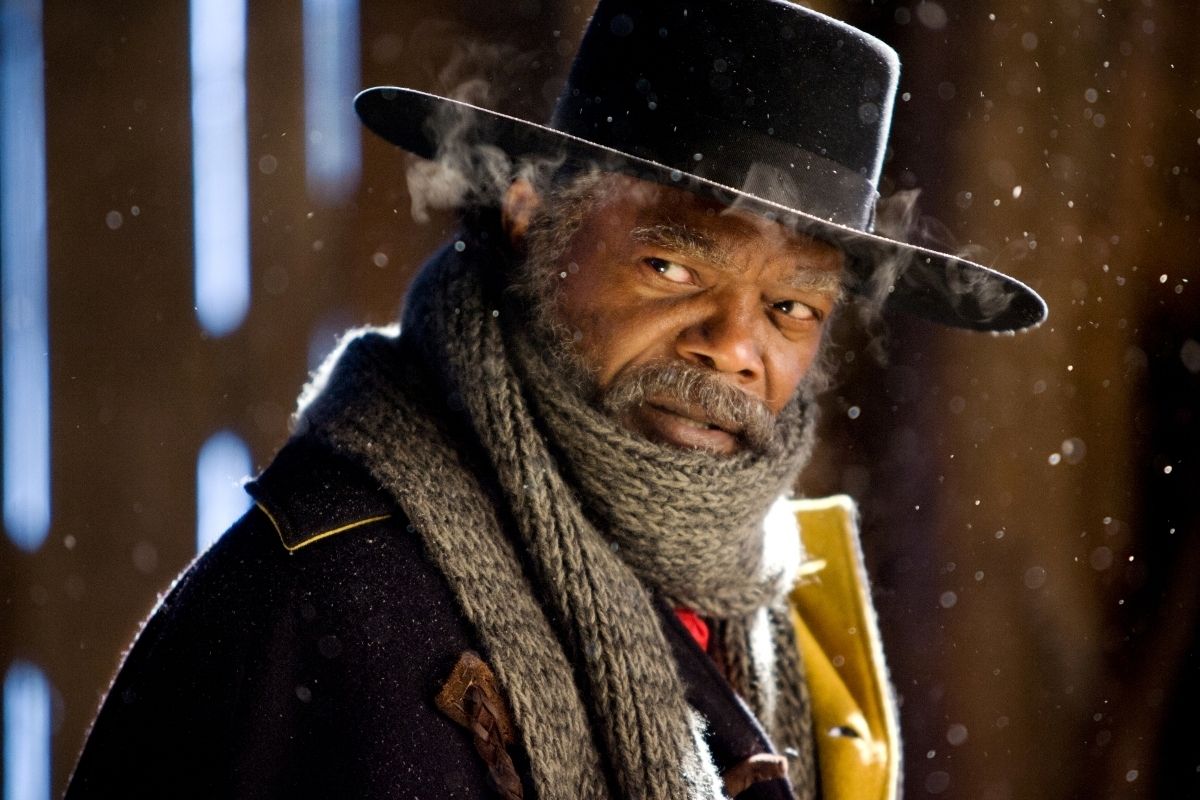 A Conversation With Motherfucking Samuel L. Jackson About What The Hateful Eight Says About Race Relations


We often talk about Leonardo DiCaprio or Tom Hanks as having worked with all of the biggest directors in the business, but Samuel L. Jackson is very much in that league alongside them.

After minor roles as an unfortunate thug in Martin Scorsese's classic Goodfellas and a DJ/Greek Chorus in Spike Lee's classic Do The Right Thing, the 67-year-old actor has breathed life into characters for Steven Spielberg, Tony Scott, Paul Thomas Anderson, George Lucas, Joss Whedon and William Friedkin, among many others.

But the filmmaker we associate him with more than any other is Quentin Tarantino. Since giving us hitman-in-midst-of-epiphany Jules in 1994's Pulp Fiction, Jackson has popped so many caps in motherfuckers at Tarantino's behest that the two seem made for each other. As he tells PAPER, his latest role for Tarantino, as Civil War hero Marquis Warren, speaks volumes of unspoken subtext about violence, race and America.

There's not a lot that you need to change. Quentin and I have conversations about what I say, and I don't just willy-nilly change things. If I want to say something else, I'll go to him and discuss it with him and we'll talk about it.

He'll say "Well, let me hear what I wrote." And I'll say what he wrote. "Well, let me hear what you want to say." And I'll say what I want to say, which is very close to what he wrote. I just want to say it in another way, because I think it comes out of that character's mouth a different way. He'll say "Okay" or he'll say "No, leave it the way I wrote it." And that's generally what happens. The rest of these motherfuckers need to say what he says.

After all this time, do you instinctively know what each other wants?

We're kind of on the same wavelength. Generally, when I get it, it's exactly what it needs to be. As characterization starts and as we're in rehearsal, there are times when I feel like I didn't say enough or I didn't have enough to say and I would say to him "could you add something here so that I can answer that or clarify this," and Quentin will do that.

But by the time the rehearsal period is over and we get there and we're ready to do it, nothing changes. The only big change we had from being around the studio table and being outdoors with the stagecoach was the cold. That was the one thing, that was the wildcard that we really didn't know about, and all of a sudden it changed the urgency of everything we wanted to do, especially outdoors. It was like "Okay, I want to get inside this stagecoach now. I don't like the snow right now."

What does The Hateful Eight say about race relations?

Well, it all comes out very genuinely. When we were having those conversations, the biggest one was about the Lincoln letter and with Kurt (Russell) and how he felt when his heart got broken. We had to go through this. We had a really interesting conversation that day.

He's trying to be a liberal in a time when there weren't any. All of sudden he's faced with "Oh, so it's true what they say about you people." Now, I could fix that, but there was no need for me to fix that because I had to go with "the only time I can safe is when I disarm you."

In the real world, that's a very real thing that happens right now. We have to be these very nice kinds of Negroes so we feel safe walking around, because if you present yourself as any other thing, then people call people on you. I feel sorry for everybody who looks Middle Eastern right now, because that's going to happen. For a minute, it was us.

How does the character in that time period relate to race relations now?

Major Warren is a lot of things, and one of the things that he is a survivor, and he's surviving in a very dangerous time. That speech was a lot longer about "you don't know what it means to be a black man in America right now." It was a longer speech. He cut it down to the right size. You don't need to say a lot more about it than that. We all understand race relations in that time.

Is it just an American conversation or is it global?

We all understand society in another kind of way, or as [costars] Tim Roth knows British society, Demián Bichir knows Mexican society. We all know that everybody has these different stratas of living, and everybody's got somebody that they particularly put their foot on or walk around on.

So when doing that, we're not just making a movie for Quentin's fans. Because people that hate Quentin and what his movies stand for are still going to go watch this movie, just because they like shoot-em-ups. There are going to be other people going "Oh, my God. I can't believe they talked like that." That's just what movies do, and that's why we make these things, so that we can start conversations or get people thinking. Hopefully, that will make a change.