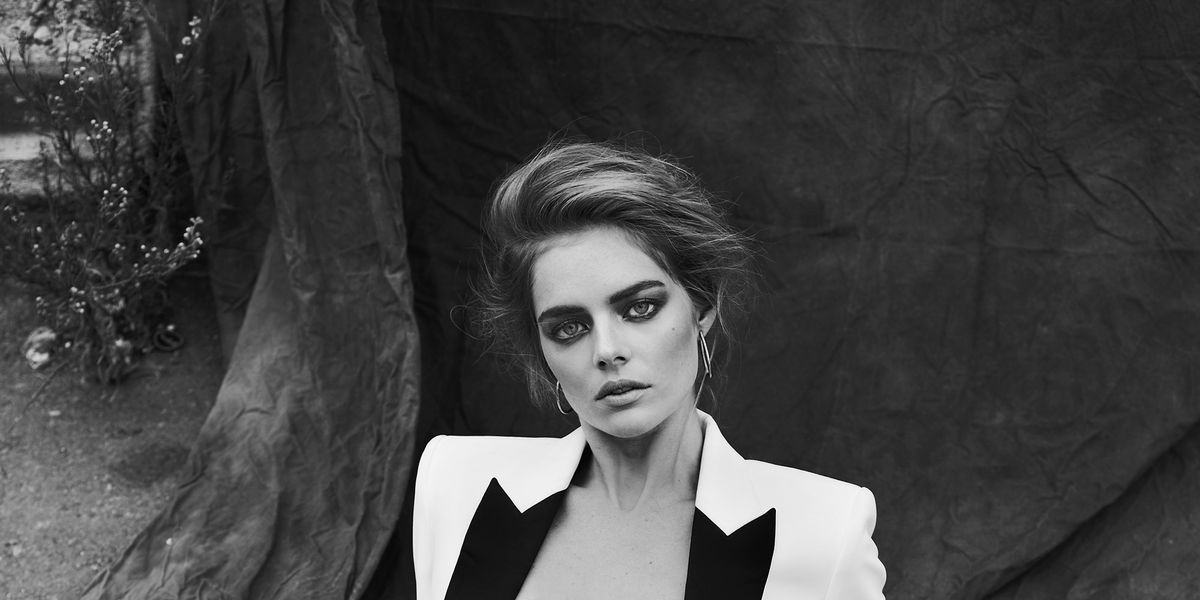 You're It: Samara Weaving

If you don't know Samara Weaving yet, she's about to be all over your TV -- or computer -- screen. The 25-year-old actress has the lead role in Netflix's upcoming teen horror film The Babysitter, as well as parts in Showtime's single-mom-com series SMILF and the darkly humorous drama Three Billboards Outside Ebbing, Missouri, alongside Frances McDormand and Woody Harrelson. After years of starring in films and a popular soap opera (think Days of Our Lives meets The OC) in her native Australia, Weaving is ready to take over Hollywood. Though, becoming an actress was never the original plan for the quiet starlet. "I started only because I moved schools a lot as a kid, and I was super shy, so my parents thought it'd be a good idea to put me into acting classes," says Weaving. Now living in LA, the blonde-haired, blue-eyed actress is determined to avoid Hollywood stereotypes by taking on as many different roles as possible. "Getting to know someone else's brain that may be completely different from yours, or quite similar, or terrifying -- it's like therapy."

You have two big releases coming up -- tell us about The Babysitter and SMILF?

The Babysitter is about a kid who has a crush on his babysitter. She's like, the cool kind of babysitter who makes him naughty drinks and lets him watch R-rated movies, and they debate Star Wars versus Star Trek -- she's basically the dream babysitter for a 12-year-old boy. Then, of course, he sees something he shouldn't. And I'll leave it at that.

And what about SMILF?

SMILF is great. Frankie Shaw, the creator and director and all around genius woman -- it's based on her life. When she was young, she started dating a guy and got pregnant. They split for a bunch of different reasons, and she had to raise the baby alone. Then her baby daddy started going out with someone else and it became this weird, awkward co-parenting trio. But I think it's a really pivotal story to tell, especially now, when there are a lot of single parents and young mothers out there. It gives a lot of insight into what that's like. And it's always fun working with a heavily female cast.

How do you prepare for a role?

It really depends on the role. I just finished this job, Picnic at Hanging Rock, which was set in the 1900s. So to get ready, I had to wear corsets and go to etiquette school. But the film was also a comedy, so I hung out with my improv friends and really exercised that muscle.

Do you have to prepare emotionally for a horror film like The Babysitter?

With The Babysitter, it was an interesting one because it does come from a place of heart and emotion -- but it's also just a hell of a lot of fun. So it was a mix between really nailing the pivotal heartfelt moments and also having a lot of fun with the evil side of my character.

How do you decide which projects you're going to do?

I really like interesting and diverse characters. The biggest fear for any actor is to be pigeonholed into one stereotype -- especially with the blonde hair and blue eyes and all of that. But I think I've been really lucky, and I've worked really hard on playing against those character stereotypes.

The power of 'no' is pretty amazing. But I'm also really lucky that my team is always looking outside the box for me. It's hard to find people in this industry that you can trust -- your life is in their hands and you can only hope that they have your best interest in mind.

Do people ever have a hard time separating you from the characters you play?

With [Australian soap opera] Home and Away it was. But I think that's because it's just such a large part of popular culture in Australia, so people think it's a documentary, and get really, really attached. People would come up to me and be like, 'How could you kill him?' or whatever, and it's like, 'No, I'm not a murderer. I just played one on TV.'

Has it been different coming from Australian films and TV to Hollywood?

Enormously -- it's a completely different ballgame. Australia makes beautiful films and television series [but] it just needs a bigger and wider platform. There's so much great stuff coming out of Australia and Europe, and especially the U.K., but people in the U.S. don't have access to it. With Picnic at Hanging Rock, it just got sold to Amazon, so hopefully that can break the glass ceiling on Aussie TV making it to the States.

There's something about every character you can relate to, and also not. But you always have to be on the character's side. Even if you're playing an evil character, you have to believe your character is doing the right thing for themselves. So no, there isn't really a particular niche role that I gravitate towards, or find easier or harder. I find everything very interesting.

I've read a lot of actors saying they bring themselves into every one of their characters.

You have to, otherwise it's not truthful -- otherwise you're just lying. There has to be a little bit of you in there, or else you're not going to tell the story properly.

So what's the best part about taking on a new role?

Oh gosh. It's the moment between having done all your homework -- learning every line backwards and forwards, you know where the arc is, you know where the pivots are, and you build your own little platform, then as soon as you step on that stage or set, you leap off that platform you've spent months or weeks building. It's this moment of utter freedom where you know exactly where you're going and where you've come from, and you're just living in the moment. When actors have that -- that's why we keep doing what we do.

What would be your dream job?

I really love Wes Anderson as a director -- I'd love to work with him. His style is just so special and genius. And a role that I've been wanting to play for a long time, but I'm bit too young for is Marilyn Monroe. She's such an interesting character and so heartbreaking -- I'd love to get inside her skin.