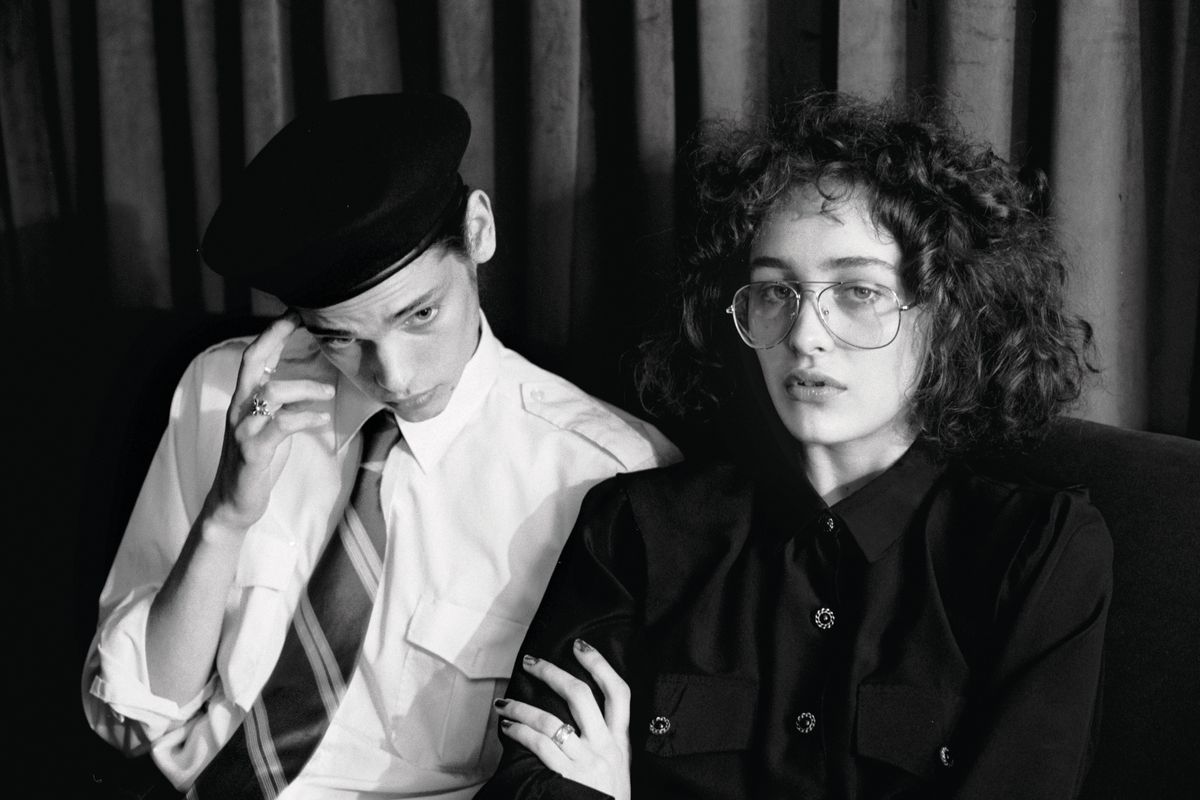 New York-based fashion photographer Sam Marie-Saint has long been enthralled by French New Wave cinema. He first discovered the genre through Jean-Luc Godard's My Life to Live, and his infatuation with the the film's style led him to the works of François Truffaut, Federico Fellini and Michelangelo Antonioni, each of whom played a pivotal role in defining his own aesthetic.

After graduating from UCLA with a degree in Directing & Cinematography, Marie-Saint lent his fashion lens to a slew of independent projects, where he experimented with colorful portraits inspired by the '60s French film aesthetic, before later working on commercial partnerships with brands including Coach. Having firmly established his sartorial vision in fashion, the creative's newest project — a monographic photography book, titled Sodapop, out today — strays from any intentional fashion styling and instead focuses on the candid nature of New York's iconoclasts.

Once again employing elements of French New Wave cinema and traditional Italian filmography, except this time infusing punches of '50s Americana and punk, Marie-Saint's bound series pays homage to the grit and glamour of Downtown Manhattan and Brooklyn's rebels and romantics. Between scenic rooftops and seedy hotels rooms, fishnet tights and lipstick-stained cigarettes, Sodapop — which gets its name from the protagonist of the highly-acclaimed novel The Outsiders, by S.E. Hinton — captures an unabridged perusal of the concrete jungle's many faces.

PAPER spoke with the movie-driven photographer about Sodapop's conception, his love for French New Wave cinema and his image-making process. Read what Sam Marie-Saint had to share, below.

Congratulations on the release of Sodapop! How did the idea behind the book come about?

The idea behind the book started in a watering hole in Downtown Manhattan one winter night when Vladislav Ginzburg of Ginzburg Fine Arts approached me about the idea over a drink. It took about two years from that first meeting to sign the contract with my publisher Damiani and to start work on the project.

Sodapop is an ode to French New Wave Cinema. When and why did your preference for this film style begin?

I got into French New Wave cinema at an early age. I saw a VHS tape of Jean-Luc Godard's My Life to Live at Tower Video on Sunset Boulevard and was instantly hypnotized by the contrasty black and white film stills of Anna Karina on the box. The shots were surrounded by red blocks, creating this sort of visual horror. I was immediately hooked and started devouring all the other films of that era. What struck me was the immediacy and improvisational aspects of the movement. The rejection of elaborate sets and production.

You're known for your work in fashion photography with brands like Coach. Did any of those previous experiences influence Sodapop?

Not as much. Aside from cinema, as mentioned, my work is influenced by punk, which I got into as a kid, like most people with an itch and a budding disdain for authority. That culture has greatly influenced my thinking and approach to photography, more in subtle ways than obvious ones. The music was still there on embers in the 1990s. There were still venues in LA that catered to punk in the middle of that global grunge infestation. There were still punks, goths, skinheads and metal heads walking around in full regalia.The goth girls with their black fingernails, black lipstick, torn fishnets and spider-web rings smoking clove cigarettes outside after the shows. I somehow always go back to that place in my head. You can never fully leave it. It's always there lurking.

Sodapop isn't a fashion photography book. Was this intentional?

It was intentional. Styling the models in the latest fashions took away from the improvisational spirit of the book. That approach just doesn't work as well in book format. The pictures were mostly improvised. I wanted it that way, nothing contrived, planned or forced. It had to be simple, direct, innocent in its approach. It's not all that different from a filmmaker's first film. That innocence can never be revived subsequently in a sophomore production. It was now or never.

Were there any favorite places of yours in the city that you included in Sodapop?

I moved to NY a decade ago, and I've lived in the East Village, Williamsburg, Harlem and Soho. I've included images from every stop. I've even included a landscape I took in Paris many moons ago. It all somehow works seamlessly. My favorite place to shoot in NY, though, is probably Dumbo. I love industrial landscapes, factory smokestacks, cobbled streets and old abandoned warehouses. Though much of that is now a memory in Dumbo and in most neighborhoods in NY.

Film is a large source of inspiration for you. Are there any movies in particular that inspired Sodapop?

The films that inspired me but not necessarily Sodapop directly are the early films of Jean-Luc Godard: Breathless, My Life to Live, Pierrot le fou, and Alphaville. The early films of Gus Van Sant: Drugstore Cowboy and My Own Private Idaho. And, of course, Federico Fellini's La Dolce Vita and Michelangelo Antonioni's L'eclisse and Blow Up.

What are you working on right now? What's next for you?

The book was kind of an ending to a style that has occupied me since high school. I now want to use the fashion editorial platform like one would narrative film. This year has obviously changed everything, including how we consume photography. Fashion photography has never had that moment, that energetic explosion of ideas that brings people together, like music once did eons ago. This medium has never had a Charlie Parker, David Bowie or Jimi Hendrix. Aside from that, I want to explore the fashion video. It has potential to become more, to tell stories and function more like narrative film. After that, hopefully I will go into cinema and live happily ever after.