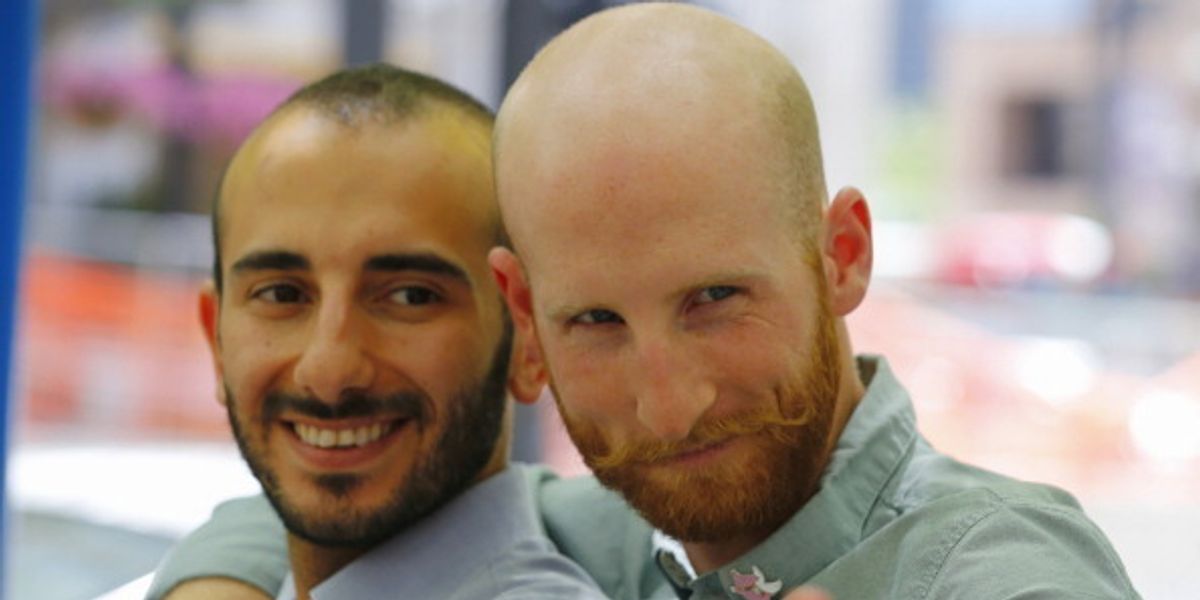 Derek Kitchen, 27, and Moudi Sbeity, 28, might not initially strike you as so different from any other couple. The duo met in 2009, with an approproiately modern and adorable meet-cute story. Kitchen followed a blog Sbeity wrote while he was living in a small town north of Salt Lake. "One day I drove up to meet him in-person, and it turned into a weekend date. It was so fun getting to know each other in this small agricultural town in northern Utah," Kitchen recalls. "We were fortunate because we knew immediately that if we put in the time and effort, that this is a relationship that could go the distance." The pair founded and run Laziz Foods, which brings Middle Eastern staples like hummus and toum to Salt Lake City, and plan to open their first restaurant, Laziz Kitchen, this fall.

"We always wanted to get married," Kitchen noted. "In Salt Lake City, we had a city-wide ordinance that allowed gay & lesbian couples to register as "partners" – it didn't give us the legal rights of marriage, but it did allow us to be on a joint apartment lease, pay the water bill together, or be liable for the parking tickets of each other. So on our anniversary in 2012, we got our 'Certificate of Mutual Commitment,' which was as close to marriage as we could get in Utah. That following year, in March 2013, we met some attorneys and began discussions about what it would take to sue the State of Utah." Along with two other couples, Kitchen and Sbeity were part of the suit that successfully challenged Utah's ban on same-sex marriages. For 17 days (until an appeal blocked marriages), LGBTQ Utahans could marry the partner of their choice--a commitment 1,300 made in the just-over-two-week span. Now, marriage equality is the law of the land for the entire country, but Kitchen and Sbeity struck an important blow for equality, openness, and change in a state that many from outside view as monolithically conservative. They showed that, truly, love is love is love, no matter where in the United States you are. "Utah was the first domino that led to marriage equality in the whole US. Our lawsuit ("Kitchen v. Herbert") is cited in dozens of other lawsuits and was considered precedent when the Supreme Court ruled in favor of marriage equality," Kitchen explains. "We're really proud of the lawsuit, and so honored to be part of such a historical moment for LGBTQ rights."

But though they were pressing and suing for the legal right to marry, neither Kitchen nor Sbeity were certain they would win--and neither had officially proposed. Shortly after they won their case against Utah and were waiting for the results of the appeal, Kitchen took the opportunity to pop the question. "We were at a Valentine's Day, celebrating our victory and the holiday, as well as Moudi's birthday on Febraury 15," Kitchen recalls. "I got down on one knee and proposed to him. He said 'Yes' of course, and we were engaged!"

The two were married in 2015, in a very public ceremony in downtown Utah. "We had so much community support and love. We really felt that this case was one for the community at large, and really a source of pride for all of Salt Lake. So when we planned our wedding, it only felt natural to invite everyone," Kitchen shares about the wedding. "We invited all the residents and community members, we invited local elected officials and the clergy from local churches. We wanted our wedding to be as inclusive as possible." They got their wish with, Kitchen estimates, 1,800 people participating in the ceremony. Kitchen and Sbeity also called on their community when sourcing food, drinks, and decorations--all of which came from local Salt Lake companies and people. Kitchen and Sbeity said their "I do"s in front of Salt Lake's Gallivan Center on May 24, 2015. "It was a long time coming and it feels like the best accomplishment I've ever made in my life," Moudi told Salt Lake's Fox 13 after the ceremony. The Sunday ceremony was carefully chosen by the couple, as Sunday is generally a quieter day in Salt Lake."We wanted to activate our city on a day that normally isn't very active," Kitchen explains. "The community in SLC is overwhelmingly supportive of LGBT people. We were supported and loved and celebrated by the whole city, which is why we made our wedding public. Did you know that SLC has the highest rate of LGBT parents, per capita? Salt Lake is GAY!"