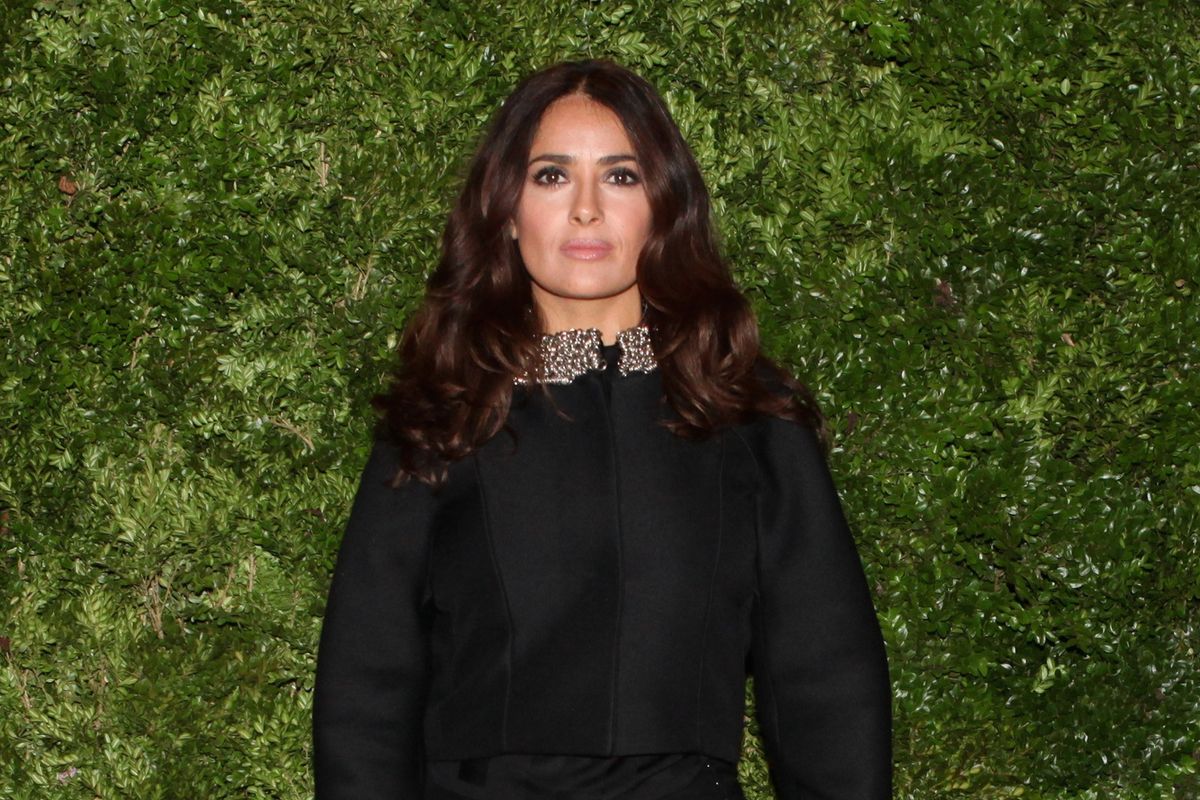 Salma Hayek On Her New Film "Tale of Tales"

The actress talks to us about the epic shoot, which included eating hearts, saving babies and wandering through a labyrinth.

It's been a rough week so if, like us, you could use some escapism, head to theaters starting tonight for some Renaissance-era fairy tales starring Salma Hayek. The actress appears in Tale of Tales, the Matteo Garrone-directed film inspired by three stories by 16th century Italian writer Giambattista Basile. In the movie, which made a splash at Cannes last year, Hayek plays the Queen of Longtrellis, a monarch longing for a child and willing to go to great lengths (like -- spoiler alert -- eat the heart of a sea monster) to have one. We spoke to the actress, who was at home in London where she lives with her husband, Kering CEO François-Henri Pinault, and their daughter, Valentina, about the epic shoot, why the movie's themes are more relevant now than ever, and her thoughts on the different ways men and women relate to love.

The setting of Tale of Tales looks so exotic -- where did you film it? Was it in a studio?

Nothing in studio. Nothing. We shot maybe one of the other stories [in] a studio but if there was a studio, it was a very small piece because most of it was [shot in] the most extraordinary locations. My part was shot in Sicily and Tuscany.

It was amazing. I mean the locations were so different and so special and so dangerous most of them. [ Laughs]

Oh yeah, yeah, yeah, yeah. There was a dangerous shoot every day...Every day something would happen, like when they were carrying me in a carriage, I had a real baby in my arms and the two guys carrying it in the front -- I don't know [what happened], I think just they got tired and they dropped the front. The door opened and I cannot put my hands [out] because I have this baby in my hands and my dresses weighed all 30 kilos. It would have killed the baby if I had not had such a long career doing stunts. I used to say, "Why did I do all my stunts, how stupid was I? My body is destroyed. Why did I have to be so macho and no I can do it? Now I'm old and I'm all broken." But this day I say, thank god I knew how to do all those stunts. Because I knew how to roll without dropping the baby and without crushing the baby. The poor parents of that kid, they ran and I said "I didn't drop him!" and they said, "We saw!" and they started kissing me, "Thank you, I don't know how you did it! You rolled!" And the baby was sleeping. I had done like a somersault, and the baby was still sleeping.

You're obviously good at what you do.

Well I don't know if that's what [it was] -- that's not what I do normally but we survived that one. But every day I had so many [stories like that] but the weird thing is that they're all fond memories.

They're great stories -- nothing bad happened, but there were so many things that could've gone wrong.

So after what happen the baby, did you pick back up and complete the scene or did you have to take a break and --

That's hardcore. Going back to the bigger themes from the film, did you find that the movie had any larger messages or statements that audiences should take away?

Yes. [Giambattista Basile, the Renaissance-era author of the fairy tales for which Tale of Tales is based] talks about things that concerned women back then that are so relevant today. Like marrying a monster and you don't know how to get out of it or one of your parents marries a monster and you have to escape to get out of it. The issues of being a mother or not being able to be a mother. And then, once you're a mother, the abandonment from the children. It's something that is still really poignant for women today. And the last one is how we long to be loved. I always say this: the biggest fear men have is to be loved. The biggest fear women have is not to be loved.

Hayek in Tale of Tales

Wow. Well there you go.

Think about that one.

You got it figured out.

And so for us, you know, the longing to be loved and then the realization that they can only love you when you're young [leads to] the obsession of being young and beautiful.

Tell me about the scene where you eat the monster's heart.

We did nine long takes but every take was so exciting because Matteo [Garrone] would say, "Ok, every bite you have to do with hope" and then the next take, he'd say, "You're desperate! You're devouring and you're desperate. There's anxiety. You're scared"...There was one time we had to cut because I was gagging. He needed the heart to be made, inside, biologically exact. So there were arteries, and they never wanted to tell me what was inside. But there were many different things, many different textures, flavors, all soaked in that horrible taste of the movie blood that is super sweet, to the point where your teeth hurt. I didn't know there were so many ways to eat the heart.

What was the most strenuous part of filming for you?

The labyrinth scene. It was a real labyrinth. So Matteo says, "I want you to start here!" I had to walk 45 minutes to start there and do the piece he wanted. Then he'd say, "Now I want you to move to this other part!" And I had to walk another 40 minutes to get to the other part. It was like eight hours in the heat. And I could not get out of there, you cannot go to the bathroom... and then, at the end he goes, "I want you to go back to where you were" and I said, "That's an hour of another walk. I am exhausted." "No, hurry up, it's because of the light." I said, "We were over there, why did we --" " It's the light! I need the light like this now!" And then I said, "I'm not going to --" They told him, "She's not going to make it now for the light." And he goes, "Climb over!" And I got stuck because the dress was so stiff and so heavy that I couldn't pass to the other side. It took five men to run in the labyrinth, jumping on things and he's screaming, "The light! Get the light!" I'm stuck and I cannot move! Terrified. And the wardrobe guy was screaming, "The dress! The dress!" And nobody cared about me.

Everyone's concerned about the light or the costumes.

But I love working with Matteo...I am very, very lucky I got to work with this director.

Tale of Tales comes out today - watch an exclusive clip: