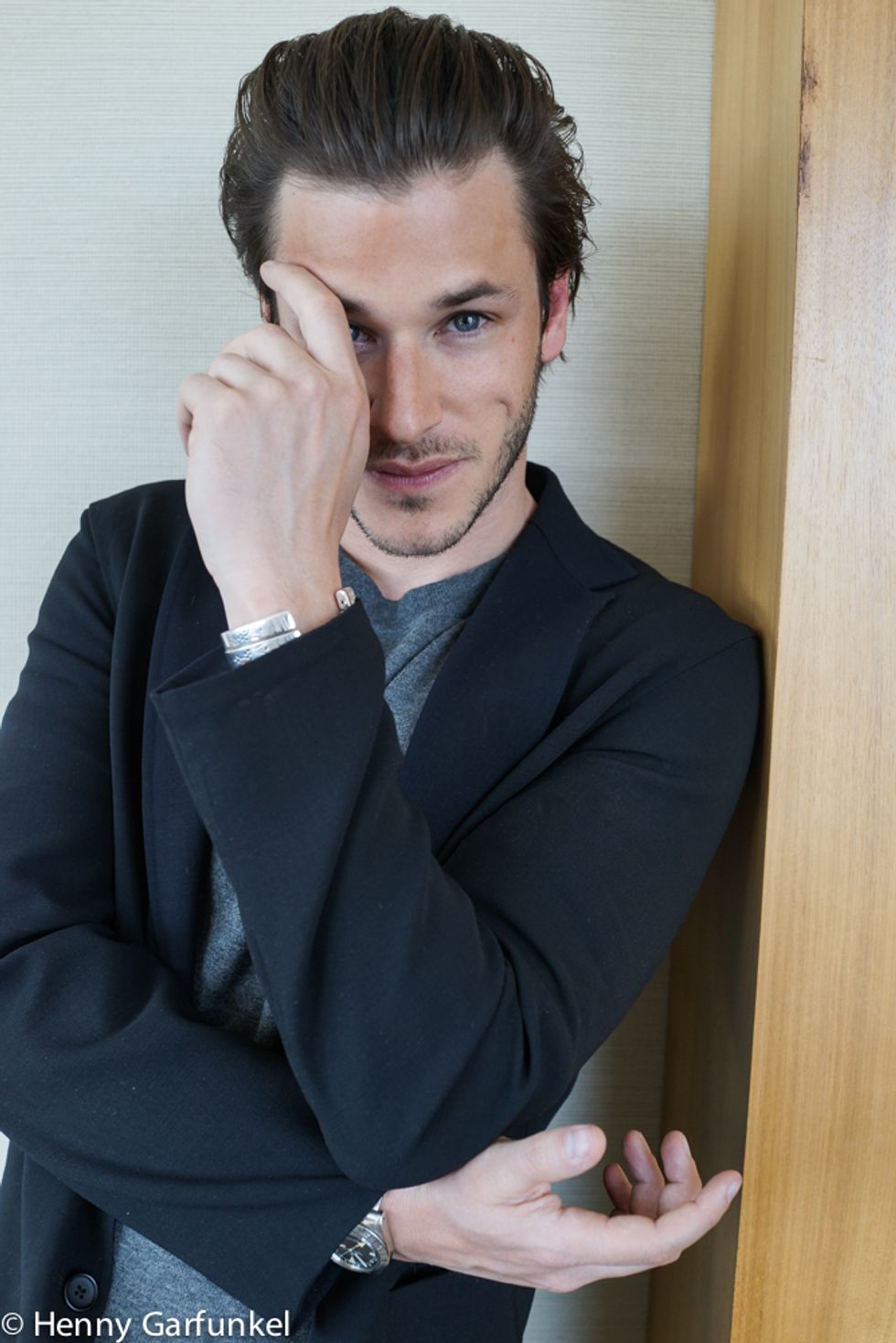 Gaspard Ulliel is one of those actors who can lose himself completely in a character, often becoming uncertain of where he ends and the other begins. So it makes sense that you might not immediately recognize him from role to role in such films like A Very Long Engagement, Paris, je t'aime, Hannibal Rising and, most recently, in the Yves Saint Laurent biopic in which he stars as the late designer. His preternatural good looks can also be found splashed across billboards for Chanel or covering some of the biggest fashion magazines in the industry. But don't let the pretty -- and malleable -- face fool you, Gaspard is a gifted talent on the cusp of breaking out stateside with this newest part. We had the chance to speak to the actor about his new movie and hear about what it was like to portray a fashion legend.

After shooting a film like Saint Laurent, do you ever feel like a character's personality or traits start to become your own?

After a shoot, you just want to move on and take a breath of fresh air. Especially when it's a part like [Yves Saint Laurent] that is very demanding and very intense. But I think some of the experiences of the character are still here inside of me in some small part of my mind, I'm just not conscious of it. During the entire shoot, I would come back home at night with this fear of actually losing some part of the character, so I would just try to stay as close as possible to it and really focused the entire time.

Pretty hard, yeah, but also great because it's such a complex and rich character to portray. It's not only an iconic figure, but also a very interesting and complex human being. Pierre BergÃ©, his lover, used to talk about him as someone who was born depressed, and it's true. It's a totally different way of experiencing things. I think it was important to show his dark side and to uncover his neuroses, insecurities, doubts, delusions. Because that's what made him what he is, and that's what made him great, in a way.

Part of being a genius is nothing's ever enough.

Yeah, it's perfection, but you can never really achieve it. And in the end, it's also about trying to find your own true self. That's what Yves Saint Laurent said in his famous speech when he decided to retire. He said that he understood that, in the end, life is about this one very important encounter -- when you actually meet with who you really are. What I liked in this film is it's not just a straightforward biopic in the way you would expect it to be. It's more like an odyssey into the mind of a tortured, creative artist. As the film progresses, we go deeper and deeper into his mind. So for me, it was very daunting and very exciting to portray. In the specific decade we focus on, it was both the peak of his career and the peak of his emotional journey. It's also this specific moment where he had this affair, or love story, with Jacques de Bascher. I think this man changed a lot of things in his life and also in his creations. It showed how emotions and art are inextricably linked.

That's what struck me most about the film -- it made this icon into a real person, and a deeply flawed one.

I think one of the aims was to try to get people moved by this man and his flaws. But also, we never wanted to go so far as to actually explain his neuroses, his insecurities. It's not about explaining how he became like this. When you talk about such an icon, you just want the mystery to remain, and I think Bertrand Bonello, the director, achieved that. When you watch the film, you spend two and a half hours in a very intimate relationship with this character and after you exit the screening room the mystery is even bigger. You have to fill in the gaps.

Did you know much about Saint Laurent before you took this role?

Well, I thought I knew a lot, but I ended up discovering a lot of things on his life and his work preparing for the role. One important step in my research was to try to understand what that period [1967-1976] was really about. So many things were changing, the way of living, the way of enjoying life differently and fully, it's just after [the student protests in] May '68. It implies a lot of things and it affected a lot of his creations, too. In the end, what I realized working on this movie is that Saint Laurent's greatest talent was to actually be able to seize the essence of an era and respond to it in his fashion.

Do you have a favorite design?

I really like the first collection we show in the film, the "Liberation" collection, which was a small scandal at that time. It was the first time someone really showed a woman in such a provocative way, very erotic. Today, you can see everything [on the runway] and here it's just suggested, but it's way more powerful. This freedom he gave to women in his clothes was also very provocative at that time, making women very strong and powerful. It's another take on feminism. He was the first one to think about clothes for women that they could wear to go to work, or to walk in the street, or to even go in a club at night. Just to have pockets for the first time!

Did you do anything different to prepare for this role from what you've done in the past?

It actually changed the way I now consider the entire process of preparing for a role. I tried to do a lot of research, learn everything about this man, but at some point, I felt I was buried under facts and details. That's when I decided to change direction and step back from reality to clear some space where I could fantasize about the character and reinvent my own version of this man. That's when I realized a big part of my work was to actually go dig inside my own memories, my own life, my own emotions and inject it in my performance so that it would feel more truthful and real. In the end, that's what cinema is about. It's about seeking the truth through artifice and lies. It's a big challenge to actually be portraying such an iconic figure that just passed away very recently. It's someone who's still very present in the collective memory and I knew there would be a lot of expectations.

Did you feel any anxiety about those expectations?

Yeah, of course! But part of my job was to actually go through this process, this journey that allowed me to free myself from that pressure and those expectations. To be able to make it mine.