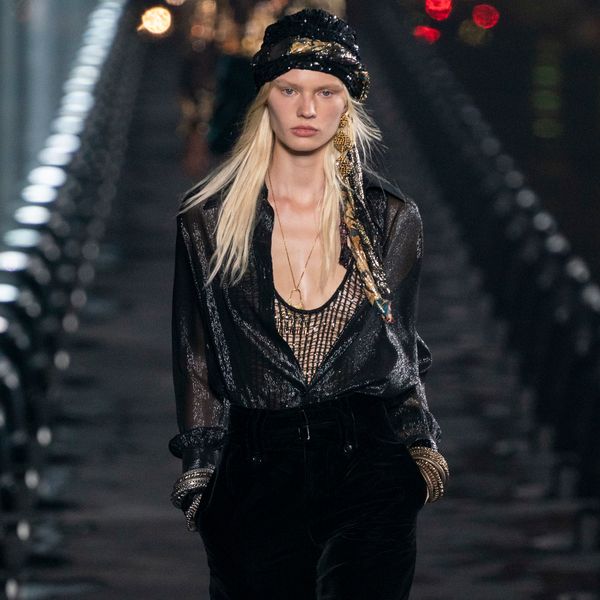 Yesterday, September 24th, Saint Laurent presented a massive spring show outside in the pouring rain, in the shadow of the Eiffel Tower. Naomi Campbell, a longtime favorite of the brand, closed the show in a sparkling le smoking suit. Who cares about a little rain when you get that kind of finale.

And while the collection drew on the label's signatures (like Campbell's suit), it also felt extremely 2000s-inspired. Half of the looks screamed Kate Moss at Glastonbury, or Lindsay Lohan at Bungalow 8. The short shorts with knee-high riding boots, the vests, the chiffon boho blouses, the embroidered dresses, the Jack Sparrow headscarves — surely Designer Anthony Vaccarello had 2004-era Sienna Miller on his moodboard (the Olsen twins off are hiding somewhere in immaculately tailored cashmere coats, praying no one remembers that they used to dress like this too). Someone needs to wear pieces from this collection to Les Deux.

One of Vaccarello's first big hits at Saint Laurent was a pair of slouchy, knee-high glitter boots from fall 2017, which Rihanna famously wore straight off the runway. And so it makes sense that for this season, the designer zeroed in on one of the boho era's signature trends: slouchy boots, generally styled with long, loudly patterned dresses. He showed them in a number of colors and fabrics — snakeskin, velvety suede, buttery leather. They seem to be a lasting trend; Vacarello showed a few pairs last season, as did Isabel Marant (who never gave up on boho chic) and Hedi Slimane at Celine (RIP the accent mark).

Slouchy boots were a 2000s essential, right up there with enormous Starbucks cups and DUIs. But boho chic burned fast and bright; the clothes were inescapable from about 2003 to 2005, and then they fell out of style faster than you could say "hobo bag" (which used to be a common term for giant purses! Ah, the Bush years). It was all maxi dresses and paisley and chunky belts with giant studs. The coolest thing was to pretend to be Anita Pallenberg. But nobody can be Anita Pallenberg!

"It was a strange social experiment, to be responsible for [the trend]," Miller said in 2008. "It made me self-conscious, which, inherently, I'm not. People would say, 'I'm sick of boho,' and now I stand up and say, 'But I liked those clothes – it's not my fault that they were copied, you wore them and now you're sick of them.'"

But apparently enough time has past, and we're not sick of them anymore. Let us all pair slouchy boots with short shorts and make ill-advised sexual choices with men in hideous Filson hats. Fashion: it's cyclical!