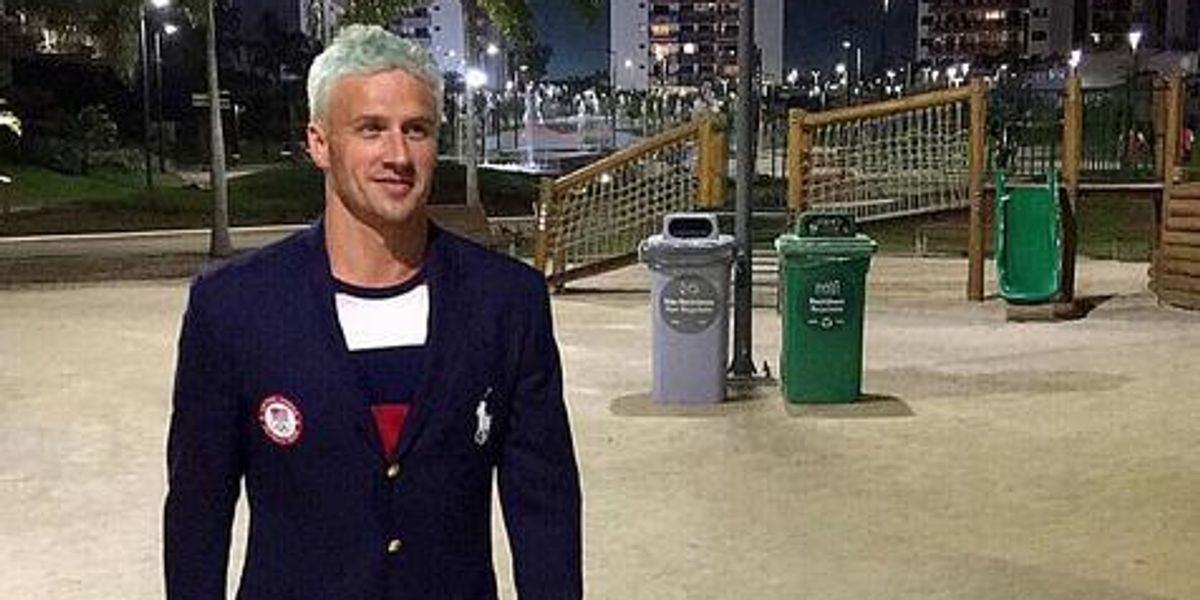 UPDATE: After days of consistent international shaming, Ryan Locthe has taken to Instagram to apologize...not for lying.

According to CCTV footage, at least one of the swimmers breaking down a restroom bathroom, and fighting with a security guard.

At the gas station, which is in Barra da Tijuca, on the route to the athletes' village, the swimmers went to the bathroom. In the process, according to the account by investigators, damage was done to the bathroom door and a discussion ensued with the manager and a security guard.

Someone at the gas station called the police, but by the time a police car arrived at the scene, the swimmers were gone. Witnesses, including a person who offered to translate for the swimmers, said that they paid money to the manager before leaving.

An international incident over a damaged bathroom door; Ryan, you are truly an idiot.

The increasingly bizarre (and sinister) debacle involving Ryan Lochte, and three other teammates from the Olympic swim team, and a possibly fake robbery in Rio, just took a big turn.

In case you didn't know, Lochte and his teammates, Jack Conger, Gunnar Bentz, and James Feigen, claimed they were stopped in their cab at a police checkpoint in Rio early Sunday morning; men apparently posing as police held and robbed them all at gunpoint.

The news was relayed secondhand, by Lochte's mother (whom you may remember from his short-lived reality show 0_-)

The unfortunate incident was an embarrassment to the city of Rio, and on a larger scale, Brazil, who have been staving off global sentiments that their Olympic venues contain dismal and unsafe conditions for the athletes.

After an investigation, however, it appears that the swimmers' dramatic tale doesn't add up; it's now believed that Lochte and the others may have fabricated the robbery to cover up for...something.

Brazilian authorities removed two of the four swimmers (Bentz and Conger) from their US-bound plane last night, detaining them until four in the morning; Feigen remained unaccounted for, although he claims he is still in Brazil, and planning to cooperate with the authorities.

Locthe, on the other hand, got the fuck out of South America days ago, and is already back home in Florida; Brazil is demanding the swimmer return for further investigation.

So what in the hell really happened?

Surveillance video from Sunday morning shows the foursome arriving back at the Olympic village in visible good spirits as they went through the metal detectors--each carrying the same materials they claimed were stolen from them.

Locthe, from his home in Florida, spoke to Matt Lauer...

... maintaining that they were robbed, but changing details of his story; Lauer relayed this news to Bob "Pink Eye" Costas.

Lauer said the medal-winning swimmer "softened" or "stepped back" elements of his story, including details of how his alleged attackers approached Lochte's taxi. Lochte initially said the robbers, posing as police, pulled the taxi over, but he told Lauer that the taxi had stopped at a gas station so the swimmers could use the bathroom. When they returned to the taxi and asked the driver to leave, Lochte said, the driver didn't respond, and the swimmers were subsequently accosted.

Lochte also told Lauer that the gun was "pointed in my direction," which differs from his original characterization of the gun being put to his head.


The second-most decorated Olympian of all time claimed that any holes in his tale were due to "trauma" from said-robbery.

Meanwhile, Michael Phelps is sitting at home with his baby on his lap, counting his money, and minding his OWN business.