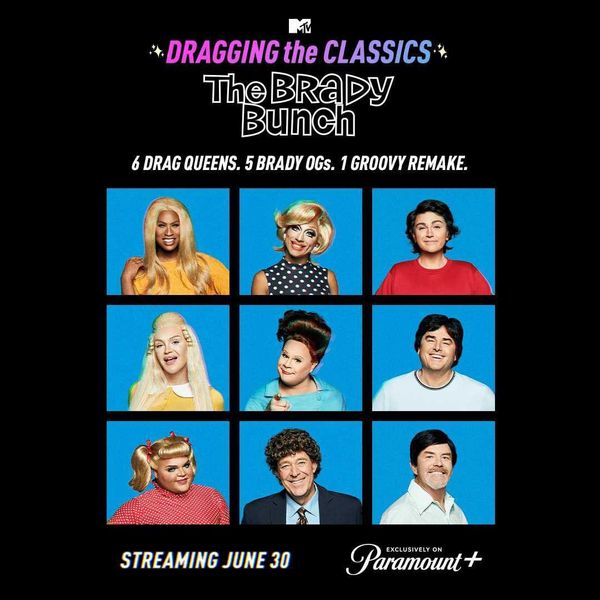 'The Brady Bunch' Gets a 'Drag Race' Makeover

The devil works hard but RuPaul Charles has been working even harder to churn out these television shows. His RuPaul's Drag Race empire has already been expanding, with numerous international iterations that dropped in the past year. And now the show is doing a major crossover event we never knew we needed called "Dragging the Classics: The Brady Bunch."

Six of Ru's legendary children will be starring alongside five cast members of the original, iconic television sitcom. For the show, they'll be recreating the 1971 season 2 episode, "Will the Real Jan Brady Please Stand Up?" In the episode, Jan is tired of living in her sister Marcia's shadow and thinks that she's been shunned by people at school because of her blonde hair. She then decides to buy a black wig to show off the "New Jan Brady" at her classmate Lucy Winters' party.

Shea Couleé will be playing Marcia Brady, Kylie Sonique Love is going to be Jan, BenDeLaCreme is stepping out of drag to play Greg, Bianca Del Rio will be their mom Carol, Nina West will be the housekeeper Alice and Kandy Muse will transform into Cindy. RuPaul and Drag Race judge Michelle Visage are also expected to make appearances.

Related | RuPaul Has A New Playlist And Merch Line With Balenciaga

Meanwhile, Barry Williams who played Greg Brady will be the family patriarch Mike, Christopher Knight and Mike Lookinland will be reprising their roles as Peter and Bobby, Eve Plumb who played Jan is going to play Lucy and Susan Olsen who played Cindy is going to be a classmate named Margie.

"For so long, The Brady Bunch has represented the idyllic aspirational mixed family, but by mixing the stars of the original cast with the stars of RuPaul's Drag Race, we have been able to remind folks of the true meaning and value of family," he told Variety. "It's also thrilling for us to have the opportunity to showcase the talents of so many of the Drag Race girls, and to see their work alongside iconic actors! Hopefully, this project will help encourage folks to create even more opportunities for artists who don't always get called upon."

The show is going to air exclusively on Paramount Plus on June 30.