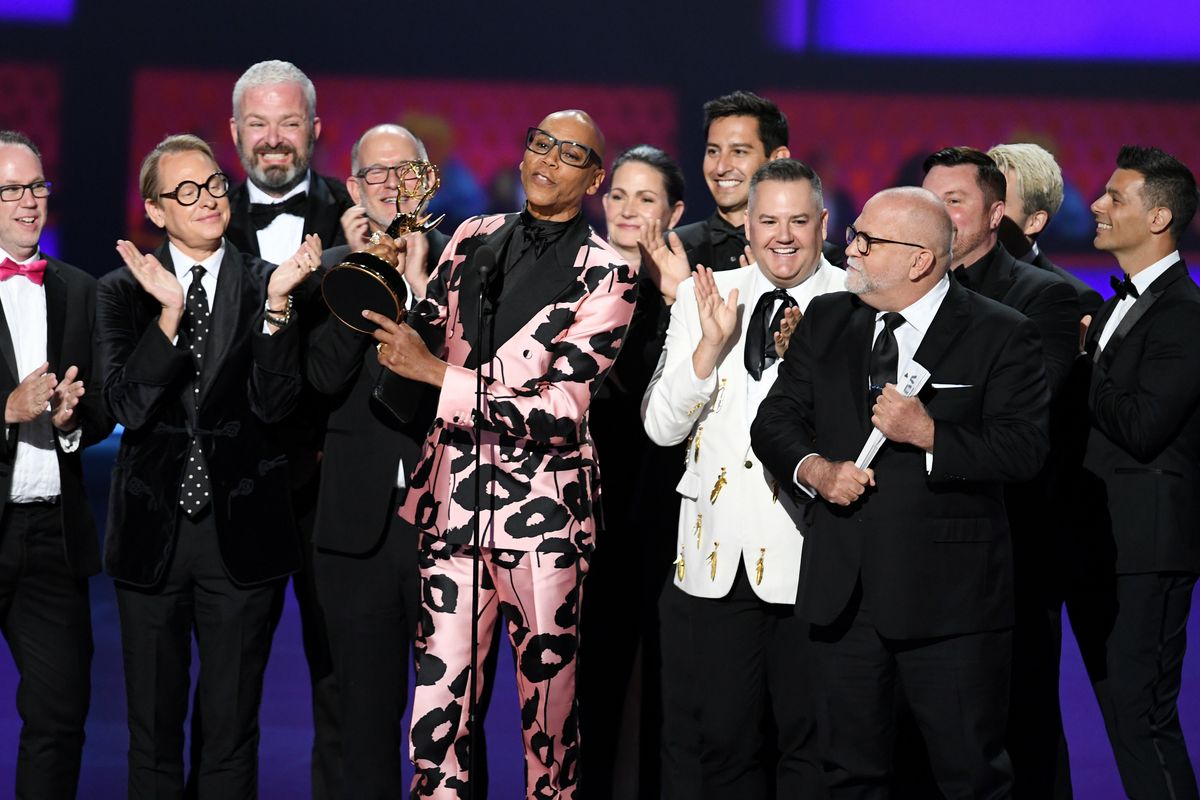 RuPaul picked up his sixth Emmy last night for RuPaul's Drag Race, taking home Best Reality-Competition Program. When he gathered up the Drag Race team to accept the trophy, the crowd took notice that Ru gave his speech in front of a largely white and male crew.

Essence reporter Danielle Young gave Ru the space to address the visible lack of his show's behind-the-scenes diversity during a post-show press room.

Her question, which was painstakingly respectful, took stock of Drag Race's critical LGBTQ representation: "I'm curious about how you feel, especially as someone who represents so strongly for the LGBT+ community... Do you feel like it's important for that to be represented behind the scenes as well?"

Related | All the Looks from the 2019 Emmys Purple Carpet

You might say Ru didn't handle it very well. He started off by cutting into her question to make a cringy joke about people struggling to pronounce the acronym "LGBTQ"... which Young didn't do. "And the BLT community, I love myself from bacon, lettuce, tomato," he quipped.

He followed up by answering her question, which was specifically about behind-the-scenes diversity, by pointing out his own visibility: "Well, first of all, the host of our show is Black, gay and a drag queen. So check, check and check!"

At no point did Ru acknowledge that the Drag Race team doesn't seem reflect the diversity the show champions... or that he was standing in front of a dozen white people. He continued: "But we're pretty diverse, there are lots of different types of people here. But is it important? Absolutely," finishing up by butchering a quote from The Color Purple to talk about his own struggle for success.

What bothered me about RuPaul’s response. 1. When I said he reps the LGBT community, he said also the BLT communi… https://t.co/bmyYPJaQ6t
— Danielle Young (@Danielle Young)1569209123.0

RuPaul squandering the chance to push forward the conversation about the gap between on-screen and off-screen diversity — in which marginalized artists continue to be denied opportunities to architect films and TVs, even as they star in them — was a bummer, in light of it all.

Of course, Drag Race's win wasn't the only time last night when a consulting boardroom's worth of white people went up onstage to accept an award for an ostensibly progressive show. Teen Vogue points out the same was true for Game of Thrones and Last Week Tonight with John Oliver. All are solid reminders not to over-congratulate ourselves, or let one individual's success be a stand-in for structural change — something RuPaul needs a lesson on.