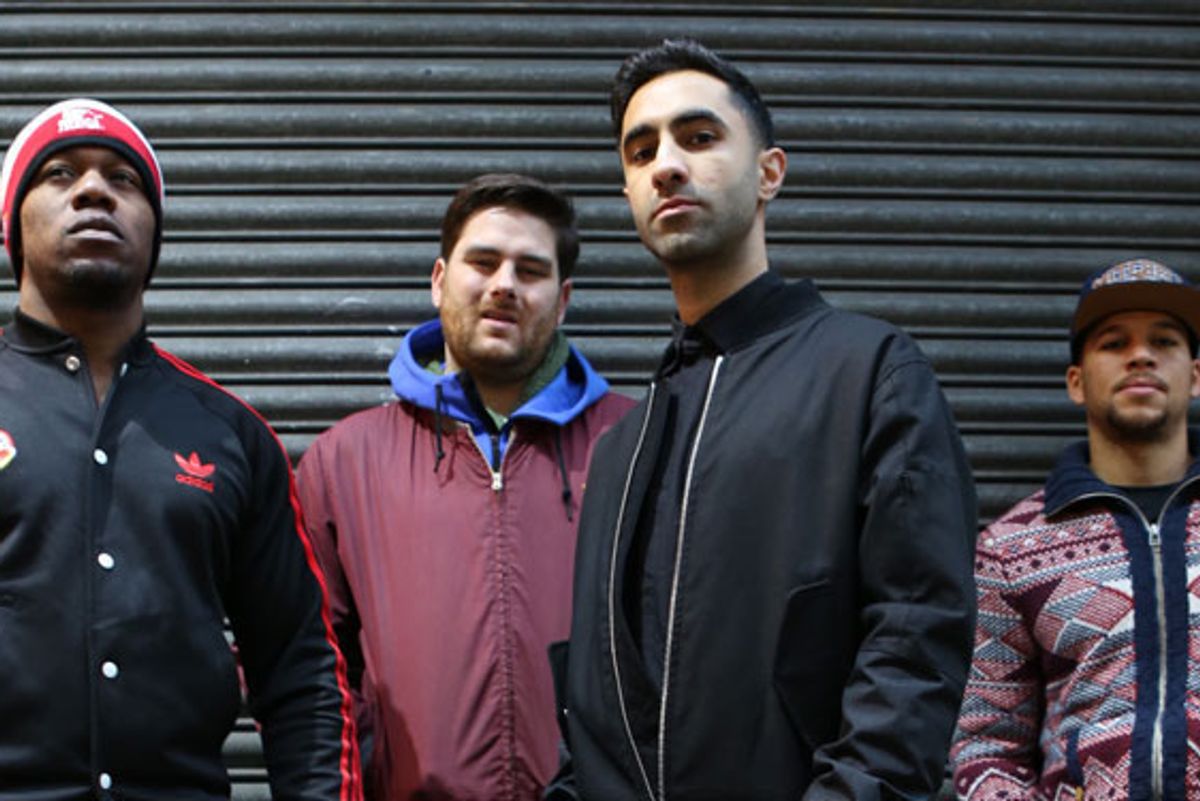 Rudimental On Their "Rapid Rise" And South London Roots

Rudimental has had a helluva past year. In a mere 12 months, the South London quartet have gone from playing small clubs to selling out arenas and dominating US radio with their Ed Sheeran collaboration "Lay It All On Me" -- and it's for good reason, as they've proven themselves a high-energy force to be reckoned with. Ahead of their summer tour with Gorgon City -- which includes a headlining spot at NYC's annual SummerStage event -- we sat down to talk with band member Leon Rolle, aka DJ Locksmith, about everything from being one of the few bands that actually break genre barriers to the band's humble beginnings in one South London borough.

You guys have worked with Ed Sheeran on a couple of songs—"Bloodstream" and "Lay It All On Me"—both of which have been pretty big worldwide hits. How did you guys cross paths, and what made you guys want to work so extensively together?

That's a funny one. We've known Ed for a long time -- since he was kind of unknown. And we literally just met at one of our mate's birthday parties who we knew from back in the day. It worked because his career was starting to unfold, and we kind of knew that at some point we would work together. We did a remix of one of his tracks called "Drunk," and from there he said that he loved the remix and that we needed to get in the studio [together]. Then we got asked to support him in America, and we found time in LA to do a writing session with him. We managed to show him "Lay It All On Me", and we also managed to cut maybe five or six more tracks at the time. So there's more work out there that we want to share with the world as well.

Within a few years you guys have gone from playing small London clubs to huge arenas. What has this rapid rise to popularity been like?

Yeah, the "rapid rise" isn't necessarily as rapid as it may seem on the outside. It has taken a lot of hard work to get to this point -- a lot of slugging away, touring America a lot, and losing a lot of money [in the process]. But we always believed that America one day would show us the love we have for them and finally come to understand the Rudimental sound and vibe. It's really rewarding to see that we're actually touching base with [US radio hit] "Lay It All On Me" and people have actually gone out of their way to find out about us as well as coming to see us live.

On your website, you guys label yourselves a "drum and bass" band. But as you've gotten more popular and have started working more within the Pop-sphere, have there been any difficulties in keeping true to this genre or maintaining your core fan base?

That's a weird one because asking to be labeled as a "drum and bass" band in the beginning is so far from the truth. It's one of those things. People find it very difficult to support an act that has a variety of sounds, so they kind of try to box you into one genre, and see how it unfolds. We've never ever been just "drum and bass." We're a band, and as a band we like playing different genres of music, so it was never really hard for us to be a band that our fans follow because our core fans knew that we were more than just a drum and bass band.

Since you've become more popular in the US and have started to play here more, have you noticed any differences between US and UK audiences?

Yeah, it's so rewarding to find success in America because in the UK when we first started, we would only roll out one or two songs that were very popular -- and its hard to get that message across [that way]. However, we feel like American people have gone out of their way to research and find out about us. They might have found out about us through one song, but they have gone back and found out about the deeper songs and the songs that may not be singles. When they come to our shows, they can expand on their research in a way, and they love the body of work that we produce.

Could you talk a little more about how you guys formed? How has the fact that you guys have known each other for so long influenced your dynamic as a group?

It's crazy because I've known Piers [Aggett] and Kesi [Dryden] since I was five years old, so the band was formed from friendship and with that friendship came from common interests. Our styles and genres come from the influences that we've listened to -- from the likes of Lauryn Hill and Sly & the Family Stone to old school garage, jungle and drum and bass. So we kind of always knew that we wanted to play this together.

Do you think that growing up in South London influenced the sound of the group in any way?

Oh, definitely. We grew up in South London, but London in general had such a massive influence on us. London holds so many different types and genres of music, and with that you have no choice but to be infected by all of it.

You guys have discovered and featured singers that have gone on to have pretty successful solo careers—John Newman, Foxes, Ella Eyre. What is this process of discovering a singer like, and why not have one definitive singer for the band?

Finding vocalists is something that we've made a passion out of now. We had already written a couple of the songs beforehand, and we knew that John Newman would take it to the whole next level. Our live show has played a big impact on us finding new vocalists because as one vocalist comes in, another one comes out. We have to go out there and actively try to find vocalists that fit the mold of Rudimental's live show. For us, the main reason we don't have one vocalist in our songs is because they don't actually work. Our songwriting and the way we produce our music is sporadic. I think it would be hard for one vocalist to sing throughout the whole album. And I think it [unifies our sound in a way that's different from most other groups]. It might be hard to understand at first, but once you buy into the whole Rudimental pool of vocalists and realize that the positivity and the vibe stays the same. I feel like the audiences love it.