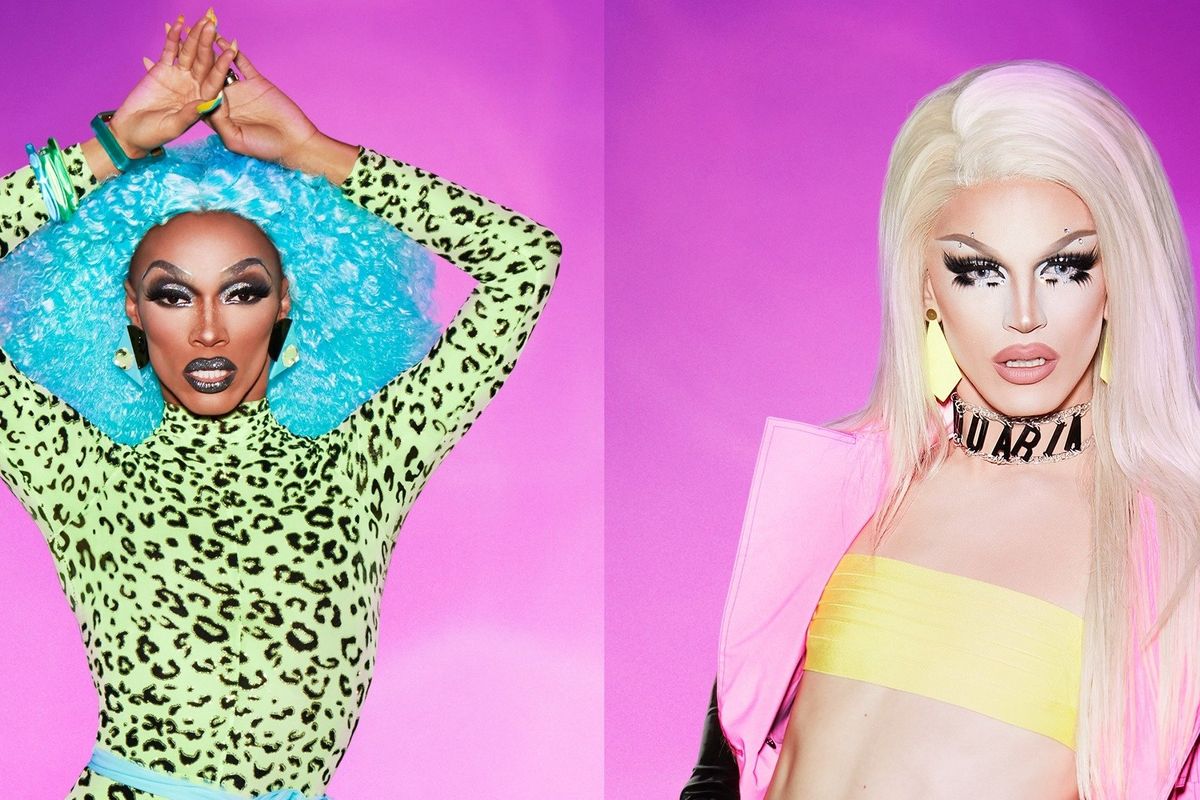 RuCap: The Gag of the Season

The buzziest moment of this week's episode of RuPaul's Drag Race didn't even occur on RuPaul's Drag Race. Instead, Untucked was the setting for one of the most concise and dynamic conversations about the complex racial dynamics of reality television in herstory. I'm still shook.

This week the queens were challenged with creating commercials for Ru-approved dating apps. The girls were split into teams, which always helps stir up drama. As the queens were painting for their commercial gig, Aquaria threw shade at the Vixen for wearing someone else's wig in last weeks "Best Drag" runway challenge. The Vixen has already made it clear that she will not hold back if any of the other girls comes for her, and immediately cut Aquaria's read off at the knees. In a scene straight out of Charlotte's Web, a spider appeared in the workroom and "saved Aquaria's life," distracting the girls from the fight.

Asia O'Hara's butterface and Tweety Bird runways look earned her the night's win, and Yuhua Hamasaki and Mayhem Miller's poor performances landed them in the bottom. They duked it out to Hole's "Celebrity Skin," the go-to drag number for every edgy starter queen in America — the number of girls with hairy chests and bad shoes I've seen do this lip sync is approaching triple digits. Mayhem ate the lip sync and Yuhua was sent packing.

And now we reach Untucked. Girl.

When he earlier fight between the two queens was brought up, Aquaria insisted that the Vixen's reaction to her comment was "negative" and unwarranted. Aquaria was visibly uncomfortable and soon dissolved into tears. And the Vixen reached her boiling point.

"So this right here is exactly what it is," she said, calm but forceful. "You say something, i say something, you start crying. You have created a narrative of I am an angry black woman who has scared off the little white girl... so when you get super defensive and tell me that I'm negative when I'm just responding to what you brought to me, that will always read to these," pointing to the cameras, "as a race issue."

This is possibly the truest tea that has ever been spilled on Untucked, and the simplest and most concise explanation of the problems with race inherent on Drag Race and really every other reality TV show. When black femmes respond to attacks against them they are always seen as the aggressor, because black anger is so vilified in media. Monet X Change unpacked it perfectly in her confessional, explaining, that the Vixen is "being smart about the optics and how her personality will be perceived. People are going to judge the Vixen because Aquaria's crying. They're going to completely overlook the fact that Aquaria came at her first."

This isn't the first time where queens of color speak about white queens or white passing queens say something questionable and are greeted with "oh she's just kiking" but when a queen with sum melanin /flavor says the same thing it's problematic. What does it say about the fans
— Jiggly Caliente (@JigglyCaliente) April 6, 2018

Never before on Drag Race has the fourth wall been broken like this, with a queen breaking down how the audience is going to consume the drama as it's happening. This moment is bigger than Aquaria vs. Vixen — a dynamic that's hopefully been squashed after the Vixen told Aquaria to leave her alone. This is hopefully the start of dismantling the Drag Race fandom's ongoing issues with how it champions white queens while vilifying queens of color.

All the girls calling out "Miss Vanjie" in the workroom proves how powerful this meme was even before the show wrapped filming.

True Life: I Am the Gay Demon That Possessed Dusty Ray Bottoms

The Vixen may be a filler queen there for drama, but man did she deliver.

Was I the only person not feeling Kameron Michaels' runway look?