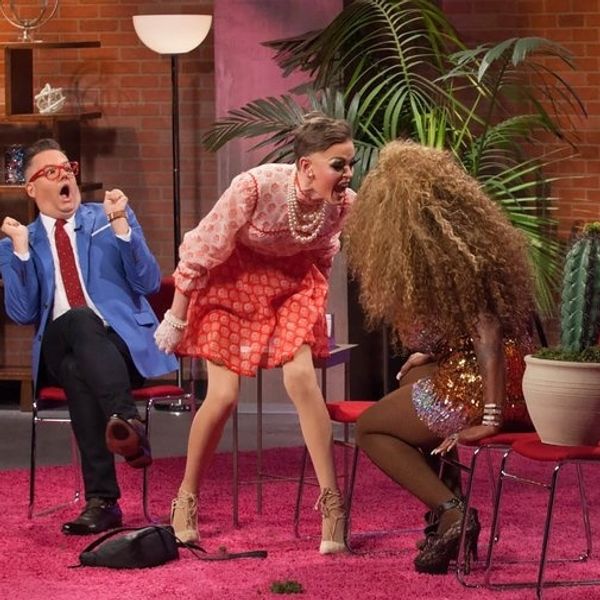 These past two weeks of RuPaul's Drag Race have finally felt like the show is picking up steam. It makes sense because the herd needed to be thinned — this season seems particularly packed with filler queens. Unfortunately one of those filler queens was someone who made a strong first impression but quickly faded into the background: Mayhem Miller, who was sent home after lip syncing against Monét X Change to the most obvious drag number ever recorded — thanks, Shania Twain!

This week's forgettable mini challenge tasked the queens with getting into quick army drag, but the maxi challenge was one of the best acting challenges the show's ever had. The girls were guests on The Bossy Rossy Show, a Jerry Springer/Maury mashup hosted by Ross Mathews. The queens were split up into pairs and given scenarios to improv: Aquaria and Eureka were very sexy babies, Monet was addicted to eating hip pads while Kameron huffed tucking panties, The Vixen and Asia O'Hara tried to take a dig at their competitors by being copycat queens, and Miz Cracker was a doctor trying to help Mayhem overcome her pickle terror — but twist, Dr. Dill was actually a pickle herself!

The challenge allowed the funnier queens to show off, both with their improvisation and the bits they'd prepared (Cracker's neverending pickle puns had me hollering). But the Bossy Rossy Show also made it clear who was struggling: Monet's jokes fell flatter than a queen with no padding, The Vixen's obvious Aquaria impersonation was as lame as her constant need to catfight on Untucked, and Mayhem's performance left her in a bit of a pickle — sorry, I couldn't help myself.

We chatted with Ross Mathews about getting to bring his talk show fantasies to life, his Sally Jessy Raphael-supported dream for a Bossy Rossy spinoff, and which queen surprised him in this week's challenge.

Thanks for taking the time to chat.

Of course. When you host a show like Bossy Rossy you have to make yourself available.

How was this challenge conceptualized?

The producers approached me and said they wanted to do a daytime talk show improv challenge and have most it, and I said 100% I'm in, but I want to wear red glasses and they said absolutely yes you can. So the idea was just for me to host the show like I watched Sally Jesse and Geraldo do it for my entire childhood, and the queens would have scenarios and it would all be improvised. I didn't know what they would do when they came out and I just tried to go along with it and guide them a little bit but let them do their thing and kept it moving.

Who did you channel most for your talk show host personality?

There was a lot of Sally Jessy influence — Miss Raphael if you're nasty. Additionally I channeled a lot of Ricki Lake — she was always cheerful and rooting them on a little bit. And I truthfully channeled myself at 12, because I would turn the volume down on the TV when I was watching and I would talk to break for Jenny Jones.

So you've been preparing for this for a very long time.

This is the role I was born to play.

When are we going to get Bossy Rossy as a spinoff?

Thank you so much for asking me the question that everybody in the world is asking themselves right now. I'm totally kidding but kind of not. My Twitter feed last night was all, "Can we get more Bossy Rossy?" I'm down, I don't know how to do that kind of show — someone's gotta buy it, but if someone wants to buy it I will show up. That was so much fun to do, I would love to do a real talk show like that but I'd also love to do a parody of a talk show like that. I love to play. It was so much fun and it was the gig that I wanted since I was a kid.

The hardest sell was the pickle scene because it was just so ludicrous, but I thought Cracker did a really good job of taking it to actually being it pickle — it was so next level ridiculous that it absolutely worked. That's one of those risks you think, when you're creating, can I even go there? Probably not, that's not safe. But the fact that she did it and that it worked is the reason why she's a queen that people are rooting for.

Who surprised you the most?

Kameron Michaels surprised me a lot. i didn't think this would be her challenge. I actually thought she could have been the queen that went home this week, just because up until this point I didn't know her to be hilarious and risky. But she fully committed and sold her addiction to huffing tucking panties really well. She made me laugh, and she was in a scene with a scene stealer and she more than held her own.

Was there anyone who you were expecting to do better than they did?

Probably Monet. I was expecting her to even potentially win this challenge because she is so funny and so loud and so good at this, so I was shocked that she was so demure and that she didn't sell it like she should have. She was a real missed opportunity. On Drag Race you get just a few weeks to showcase what you can do and why you should win. This should have been one of those weeks for Monet.

Who do you think is leading the pack right now in the competition?

Well, I know what happens, so I have to be careful — but after Bossy Rossy, the queens that are really catching people's eye are Miz Cracker, The Vixen, Eureka, Aquaria. People are falling in love with Blair, too.

You mean when we're picking up our second consecutive Emmy?

Yes, you're Daytime and Primetime Emmy — what would your dream topic be for an episode?

I always think more is more. I love a cake with a frosting but that also has a fruit filling. So something like, "My Drag Mother Is Actually My Biological Father."

It makes me very uncomfortable that the Pit Crew boys never wear shoes.

Monique is either one of those queens who sneaks her way to the top three or burns out midseason.

Kameron Michaels finally showed an iota of personality this week, but that's still a man, Maury.

I do declare, if the rumors about Blair St. Clair's fate are true, I'm starting to get ready to see her go.

Miss Vanjie has been mentioned in every episode since her elimination. A true legend... she really snapped. Ugh, her mind.