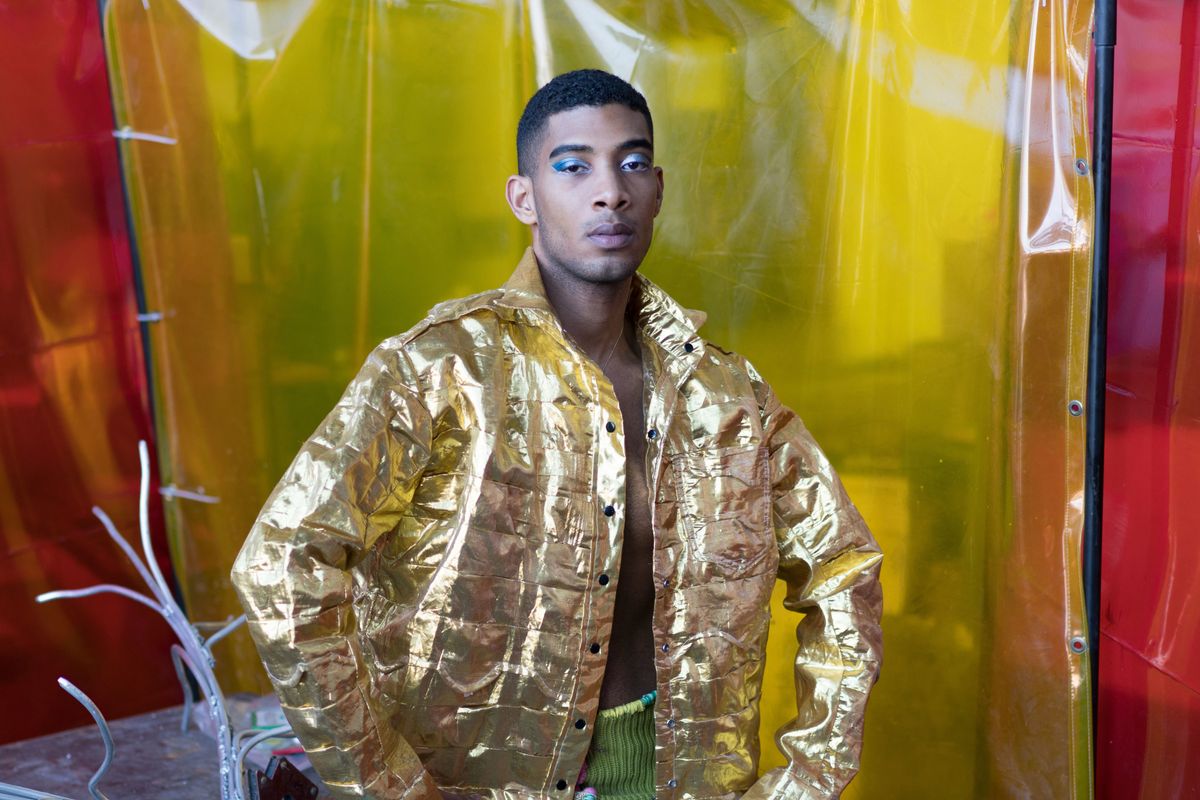 Rubby Brings Queer Femininity to a Woodshop in 'No Más'

The labor of dismantling the patriarchy can be draining, upsetting, uncomfortable — but it can also be celebratory, like a winking smile of personally knowing the work was worth it. In the new video for "No Más," premiering today, Rubby exudes a spirited self-satisfaction that's more than a perfect complement to the bouncy bop, which marks the first single for a mixtape he'll release this summer. The clip also stands as a visual commemoration of recent triumphs.

That's not what the Dominican-born, New York-bred artist was necessarily aiming for; in handling the majority of the production work of a video for the first time, what Rubby wanted, generally, was to be light, fun, and playful in broaching sexuality and desire, blackness, and in deconstructing masculinity.

"Those concepts can be very dark or taxing or really strenuous. But I feel like the way I try to go about it is in this cathartic way. I want my audience to feel like they can bring those issues to my space and my performances without feeling like it will drain them," Rubby says.

The woodshop where we see Rubby, in an apron and awash with neon pastel hues, is the same woodshop he's used for art projects at Middlebury College in Vermont, where he's wrapping up a major in psychology and a minor in studio art. Doing "all these masc things" in a woodshop is something his father, a construction worker, would appreciate; Rubby's always liked that idea. In "No Más," though, those tools are ideal for chopping away at the foundations of gender roles, too.

"Using the power tools, I kind of subverted them in a way that they were kind of sensualized, like the sparks of the welding machine, the welding mask," he says. "These hyper, really like non-sexual, but then also overtly sexual, like the hammer... That was my way of playing with masculinity in a way that was different."

A joyous, liberating exercise in reveling in your own skin, your queerness, in shutting down the patriarchy, even if just a temporary shutting out, is a gift that everyone, but especially the folks doing the real work, deserves to enjoy. As an artist, that earnest gesture is a win, no doubt.

But "No Más" also marks a few more accomplishments for Rubby: It's the first track for which he wrote all the melodies and instrumentation. Like "Confiesa," his dembow-leaning number released last year, it's co-produced with Young Man — his friend, Adam Kelly. It's "the most involved song" he's done so far, he adds.

"It's kind of this tension between I want this to happen between the two of us but it's not real, nada es real. And it's playing with fantasy and desire, and imagination," he says, describing the sound as a "bizarre" blend of "R&B, trap, electronic — but in Spanish."

Rubby held the reins on "No Más" tightly as co-director, co-producer, and editor — and so that joyful intent was beautifully realized. It all comes to a head between flashes of metallic-jacketed choreo alongside his former college dance group partner Nick Wilkinson, then shirtless, with blue-shadowed lids and sporting a flowing NO SESSO bottom, courtesy of designer Pierre Davis' co-styling. Rubby smirks subtly here and there, moments that are meant to be more cheeky than overtly sexual.

Nuanced as it may be, there is, undeniably, plenty of sex appeal in "No Más." It's sort of inherent to Rubby; he knows this. But there's healing in its bliss too, achieved with the sincere desire to deliver just that.

"Being Dominican, these are not the things that I think Dominican artists talk about," Rubby says, then goes into a brief gush about pioneering queer Dominican artist Jay Boogie. "It means a lot to add to that, and I want to to that in the right way."

Watch the PAPER premiere of "No Más," below.