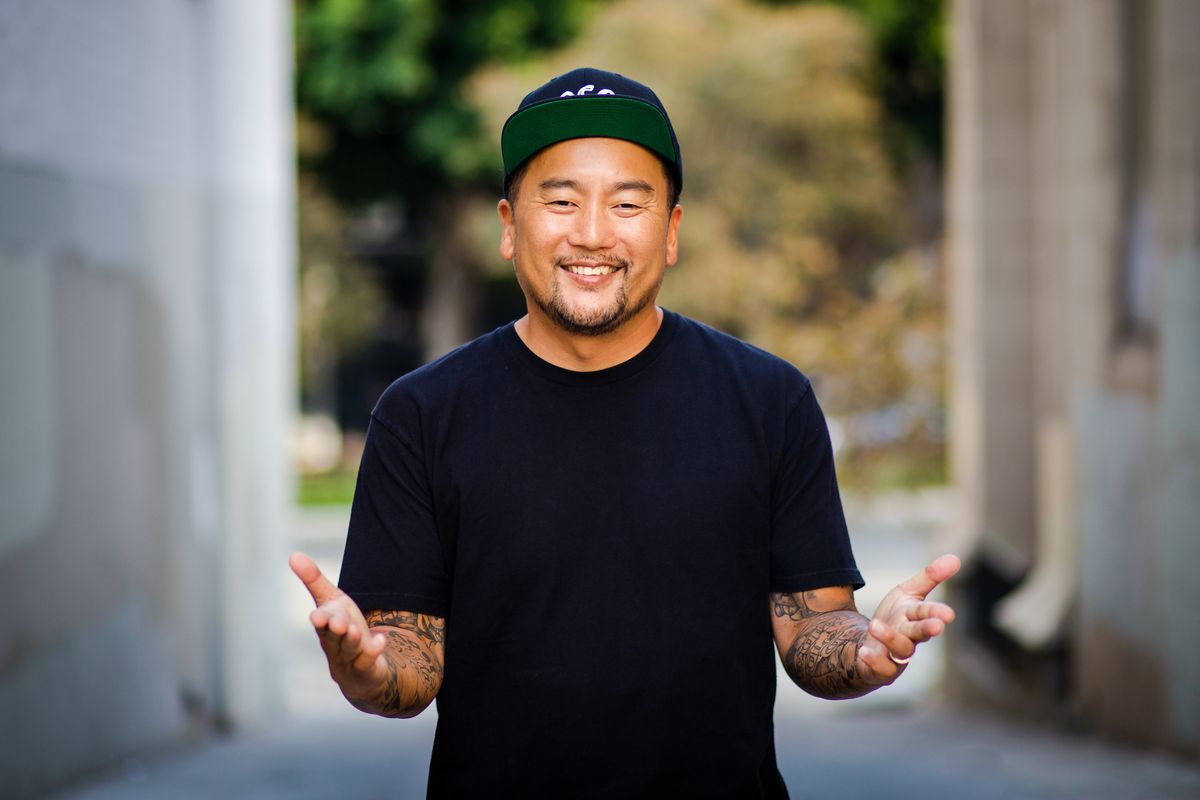 Las Vegas is in the middle of a creative renaissance, spearheaded by visionary movers and shakers across all sectors of entertainment. Following the blockbuster success of Britney Spears' Piece of Me residency, everyone from Lady Gaga to Cardi B is coming to town, and the local culture has begun to reflect this modern shift.

One of those leading the movement is style-conscious Los Angeles chef and restauranteur, Roy Choi, who was tapped to bring his unique point of view to a new restaurant within the Park MGM Hotel and Casino. The result is the newly opened Best Friend, a Korean-Western fusion experience that is as familiar, inviting, and low-key as it gets for a luxurious dining experience. Wth a diverse beverage menu and shareable plates ranging from squid and dumpling appetizers to tricked-out bibimbaps to, my personal favorite fusion item, chilli-cheese spaghetti, there's a little something for everyone.

Best Friend's casual sensibilities, from the streetwear-clad waitstaff bumping a throwback hip-hop soundtrack to its retro-modern countertop diner aesthetic, is a no-frills recreation of Los Angeles cool. If you're in town to see Lady Gaga's successful residencies at the Park Theater, Best Friend is only a few paces away, and lit up in neon —the perfect place for you and your crew.

PAPER called up Choi to talk about bringing a taste of LA culture to Vegas, and how style changes the game.

How did the concept for Best Friend emerge?

Having my first restaurant outside of California, being on the Strip and being a part of this brand new Park MGM development, I wanted to bring something that meant a lot to me with all the things Vegas needed. I looked at it in a way like a Broadway show: Best Friend takes you to not only Los Angeles, but also the world I grew up in and all the things that I represent and all the food that I've cooked for the last two years. It's like a compilation of everything as deep as immigration all the way to the city of Los Angeles to my personal transfer from LA to Las Vegas. So if you've been to LA and you've been around where I'm from, then you would be really happy — and if you've never been to LA then you would understand why LA is such a great place.

"Plates that I try to build are always about the experience. What would you want and what would feel good? What would make you happy?"

Why did you name the restaurant Best Friend?

To make people smile and make them feel warm. The whole idea of Best Friend was to bring a little LA warmth and a chuckle to a place where you don't maybe find that all the time. Also it measures up to a lot of things you're seeing now, with how people are over social media like, you know, "with my best friend." A lot of times you go to Vegas for a bachelorette party or with your best friends and getaways, and it felt like it would be a good opportunity with that name, for people to have fun with it. Plates that I try to build are always about the experience. What would you want and what would feel good? What would make you happy? Best Friend realizes that idea for me.

The atmosphere of Best Friend feels very true to the youthful and nostalgic aspects of LA culture.

The whole restaurant is my life, basically. Even though there are specific elements of very specific friends and very specific times in my life, every piece of construction in the design represents different components of my life and how and where I grew up. Best Friend is really the story of my life in Los Angeles, but I want it to feel universal. When you walk through the doors of Best Friend, I want people to feel as though they've walked into LA. Everything about it — the food, the smells, the menu, the pictures, the yearbook, the uniform, the music, the decor, every little thing. Every time you think you're gonna wake up from the dream, you don't. I used the idea of how big of a fantasy we created New York, Paris, or Ancient Rome to be, to the point where when people talk about them, it's as if all these places are fantasy resorts rather than cities. So it was fun to be able to actually create a time machine.

"Best Friend is really the story of my life in Los Angeles, but I want it to feel universal."

What is the role fashion plays in creating atmosphere?

Fashion is a big part of my life. All the uniforms at Best Friend were cut from design. Obviously we use the same tracksuit, but we put on our own embroidery. I have been involved in streetwear for a very long time, and I'm fortunate to be friends with a lot of entrepreneurs, designers, and creatives. We serve trends first and find ways to interlink our two disciplines together, whether it's with capsule collections with Jeff Staple or Union Los Angeles. I try to always find ways to make it relate to the people who are eating. I find a lot of inspiration through not only streetwear, but high-end fashion, as well. It really inspires me to think about food. The way I approach style is not really premeditated. Even in the past three or four restaurants I've opened, I wouldn't just order stock uniforms from a catalog. I'd want everyone to have their own look and their own style, but we have a cohesive flow. It's part of my DNA to create everything from scratch.

You mentioned Jeff Staple. Are there other designers you'd love to partner with?

I'd love to keep it going. Vegas has a lot of fashion week shows and conventions that come through; there are a lot of performers and stars. It would be cool to do something with Virgil Abloh. I feel like he and I could work really well with a place like Best Friend. But I'm also always into up-and-coming designers. Because I come from the streets, so I like to mix and match high and low all over the place. It really just comes down to the feeling, the moment. I do the same thing with music and DJs, which is why Best Friend is a perfect name, because it encourages collaborations.

"Vegas is having a really cool moment now creatively where more newness is possible."

What do you think about being in Vegas these days?

Vegas is having a really cool moment now creatively where more newness is possible. Not to take away from the cool moments the city has already had, but I see how Vegas goes in really powerful cycles. I think the last cycle was kind of fueled by what the Cosmopolitan did, and the cycle before that was fueled by what the Bellagio did, and I feel right now we're in a new cycle. I'm trying to create a downtown arts scene or music club versus a Metropolitan Museum of Art or the Whitney or the Guggenheim. I feel like Vegas has a lot of Guggenheim, but it doesn't have a lot of the small little galleries from Chinatown. Best Friend can help create that culture on the strip, and maybe that culture will grow in the next five years which will allow a new lane for a lot of young creatives to flourish. The city's on fire now: I mean, Lady Gaga's doing a residency, Cardi B is coming to town. They bring whole new audiences with them. Vegas is the biggest stage in the world in terms of a big show, and more young people are being invited to the party. It's great to be part of that, and I can't wait to see how things develop.