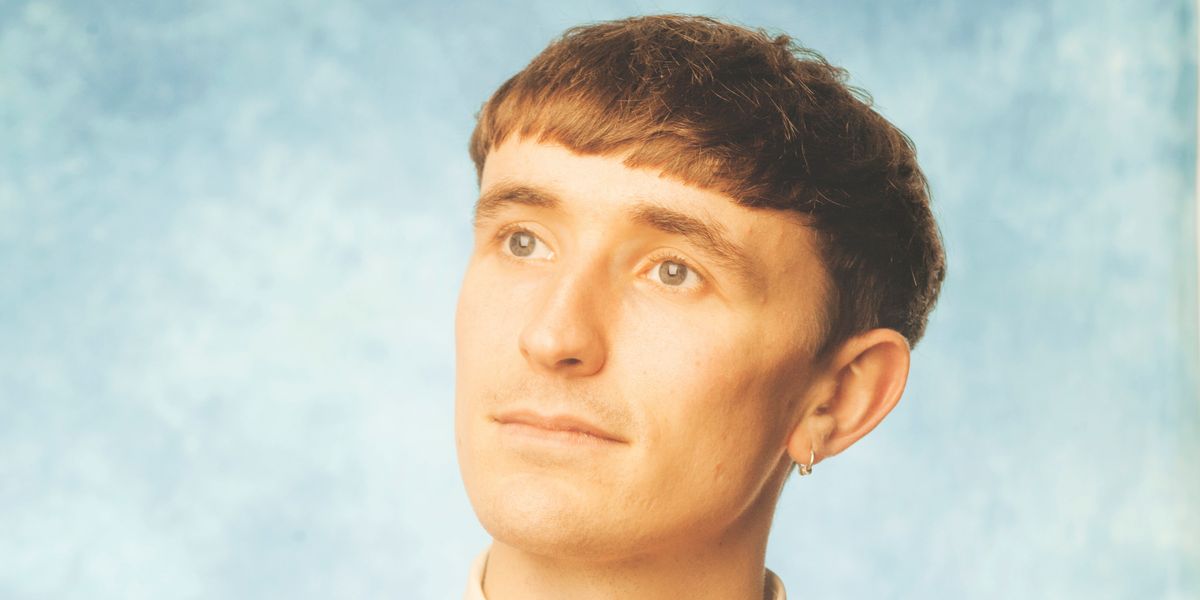 Without reconciling the two, family and personal loneliness are the themes of Family Portrait, the just-released debut full-length album by Felix Clary Weatherall, aka London artist Ross from Friends. Paying homage to the former — a father whose love for dance music led him to build a sound system in the late '80s that soundtracked a subsequent DIY European tour of parties in squats and random public spaces, documented in full by a friend who'd later become Weatherall's mother — might seem to exclude the possibilities of exploring the latter, but these subjects exist separately on the album, and in surprising harmony.

Culling influence from the styles his father championed then, like Italo disco and hi-NRG, the album makes for a sweet tribute, yet Weatherall has no qualms about tapping intimately into his individual sense of isolation. "Pale Blue Dot" is easily the clearest representation of this; named for a 1990 NASA image of a faraway Earth "surrounded by absolute nothingness," as Weatherall describes it, the track repeatedly calms between bouts of speedier beats, and those moments seem to reflect a certain solitude within the greater, busy and populous world.

The music video, released mid-July, is a compilation of the tour footage gathered by his mother — a time capsule representative of his parents' time together shortly before he was born — but that also memorializes the trip's original mission, too.

In a recent chat with Weatherall, he told PAPER more about the significance of that tour, and about how his family history has guided him in (and out of) dance music.

After seeing the footage your mom shot of your father's tour in "Pale Blue Dot," I wondered how heavily Italo disco, hi-NRG and proto-techno figure in the kind of music you make now.

I kind of knew about [the history] for a while. I never really thought how significant it was until I got older. I knew that was how they meant, and I've known that for my whole life, although it didn't really mean anything to me. I didn't think of it as really having any significance until a few years ago when I started actually getting into dance music and house music. So when I put all these pieces together, I was like, "Wow, that's actually crazy." Around the same time, my mum just got all the footage she had digitized, because she had it all on reel-to-reel. Me and my mum watched it together, and I was like, "This is absolutely mad," but then I kind of forgot about it.

[I thought] it'd be really cool to do something based around that, so I spoke to my mum and dad loads about the trip over the past couple of years and learned so much about it, and how significant it actually was. It was the place where they first met, and they were out there for a reason — this is 1990-1991, when the Berlin wall was first being taken down, and the Eastern Bloc was freed up to the West. They went over there to liberate people with the music, which I thought was such a nice thing, and such a cool, liberal thing to do. As well as them two meeting on that trip, and then I'm spawned out of this mad fucking liberal wave trip thing. (Laughs) It's cool.

Ross From Friends on Instagram: “My Mum rang me yesterday to congratulate me on the release of the music video for Pale Blue Dot, she said it was very emotional watching…”

I love that message, that they were going there to bring a sense of liberation and joy through music.

Yeah, I had no idea about that, not until — I probably just discovered that a couple weeks ago, that that was the reason they were out there. I was just speaking to my mum about it, because it was the first time I showed her the music video, and she absolutely adored it. She just told me that whole story. I couldn't believe what I was hearing; it's such a great thing that they were doing.

Do you feel like your project now has potential to do the same? To bring people a sense of liberation and joy.

"Family Portrait" by Ross From Friends

Sure. But there's still plenty of divisiveness that music can in some ways help bridge.

Oh yeah, 100 percent. It's something I'm probably more unaware of, but honestly if people find that function, I would be overjoyed.

So you named the album Family Portrait — is that in tribute to your family then?

Yeah, it was a tribute to my family, and that entire history about my parents. It also is a reference to this photograph taken by this Voyager spaceship of the solar system, and this photograph actually included another image, which is a much more famous image, called "Pale Blue Dot." I called that song "Pale Blue Dot" initially, and then I read more about this photograph and saw that it was to do with this other image, "Family Portrait," and I was like OK, that's crazy, I'm definitely calling the album that. That's such a weird coincidence. I named that song "Pale Blue Dot" just for the sake of the loneliness of this photograph — it's just a photo of Earth, and it's just this tiny, little dot, surrounded by absolute nothingness — and that's some of the emotional things that run out of the entire [album], as well.

Those feel like disparate ideas, in a way: the sense of family and the feeling of loneliness.

It definitely is. I think that goes further on more of a personal thing, for me. I reckon those two things making sense with one another, yeah.

How do you reconcile the idea of both?

I don't know. Family's always at a distance in some kind of way. It's more a general theme, like my somewhat loneliness, and also an homage to my parents, who created me, more so. I don't think it's meant to be about me being, like, separated from my family or anything like that. But it is kind of just those two themes, separately, I reckon.

I think that's important to highlight, because even if you feel lonely at times, or even often, it doesn't mean you can't also sometimes feel the togetherness of family or community.

I think the idea of my family, being a part of it, is to do with my parents, who basically just created me years and years ago. That's kind of the family part of it there, rather than it being about us being a community or us being together. It's also the family portrait thing — it's kind of nostalgic, and it's something about me and my family all being together in the past, looking at a photograph of me and my family in the past. It's a distant thing, as well.

Before you started this project, you were DJing a lot, yeah?

Right, so I was like DJing a whole bunch, and I was in bands and stuff like that. I've just gotten into music for a long time, since I was a kid, basically, and always listened to music and always made music. I first started properly making music when I was teaching myself how to play guitar and I'd record myself playing guitar, and that eventually led to me getting more electronics involved, then going back to what I was listening to as a kid and putting that into my music more.

It sounds like you veered away from electronic for a moment.

Definitely. I completely veered away from it in my teens; I was a classic indie kid when I was a late teenager, or like mid-teenager: 15, 16, 17. I pretty much just listened to indie music and bands' music, and I was kind of a scene kid — not a scene kid, but an indie kid. (Laughs)

What drew you back to electronic and dance music?

I don't know, really. I think I just remembered listening to post-dubstep music, like James Blake and Mount Kimbie, like 10 years ago. I started getting really into that, which quickly led to club music.

Are you still working on other projects currently? It sounds like you've got a lot going on outside of Ross from Friends.

Definitely. I'm not in any actual, released side project, but I'm always doing other music, all the time. I'm always making pop music, and I still record guitar and do singing stuff, just when I feel like doing that. I do various other things. My manager's trying to get me to release it all as Ross from Friends, but some of it doesn't feel quite right.

What other styles do you dip into?

Pop music, me singing, and I wanted to do this hip-hop project where I was just have a robot rapper. I was going to market myself as the first robot rapper, like Rapbot3000 or something like that. (Laughs) But I don't know how far that would go. And then just making hip-hop beats all the time. I always try to fuse quite a lot of that into what I do as Ross from Friends, as well. Especially the album — I kind of wanted to show all the other stuff that I've made, so there's a lot of more downtempo music in there, and a lot of hip-hop influenced stuff, and then I like sing on it a little, as well.

Speaking of marketing, how much marketing goes into the way you present yourself as Ross from Friends? Also, why Ross and not Joey or Rachel or Chandler? How much of the persona is shaped and how much is organic.

I try not to think about it. I guess it probably is kind of organic; I just try and put my sense of humor into it quite a lot. Just trying to do some silly stuff, then I'll do some serious stuff for a bit, and I'll just do what feels right. I suppose there is marketing, in a sense, which I don't really get involved with, which is like digital advertising or DSPs or something. I've got a manager who, luckily, does that kind of stuff. But when it comes to my social media presence and how I market myself there, when I go to do a post, I just write something silly.

Then also, when I was calling myself Ross from Friends, I never really thought of it as being like, "Oh, that's really going to stand out." I just thought it was silly at the time, I thought it was fun. I didn't really put much thought into it. I never thought I'd be a proper artist, like someone who's making albums and stuff. I thought, "Oh, this'll just be fun." (Laughs) And it continues to be fun, but it's now become my job, as well.

Do you ever wish you'd picked a different cast member than Ross?

(Laughs) I actually do. I actually think Ross comes across so badly now on the TV show. I chose Ross because he's the main love interest, and he just seemed like, in my eyes, the main character. But in retrospect, Chandler's way better. He's way more down to earth, and he's a funny guy, as well. And he doesn't do as many awful things as Ross does. (Laughs)